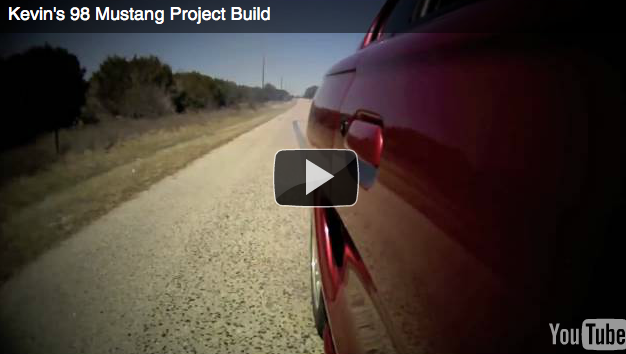 Kevin and his 98 Mustang Project Build

When I bought my 1998 Mustang GT a few years ago, I just got it because I was tired of driving slow trucks. I've had a couple trucks through high school and college, and wanted to have a sense of freedom and speed, so I went out and found my “Stang”. I always thought of it as just another car, and didn’t realize the following that the Mustang has. Car clubs, forums, and race days are just a few examples of different ways that Mustang drivers can meet up and check out each other's cars. I have recently decided that I want to build my 98 GT and just have it as a daily driver/race car; built for a track, but comfortable and fun on the streets. Now, I know that 96-98 GT’s aren’t known for being the most popular mustangs, and yes they came with the least amount of horsepower to ever come in a Mustang GT, but I’m definitely going to change that when I get finished with this build. Here is a list of mods that I have done to my car so far and the mods that are soon to come…

After I get all of those installed and I am ready for some real power, I plan on building a forged 4 valve turbo Cobra motor and sliding in a T-56 6 speed transmission. I’m also gonna beef up my rear end to handle the power and torque that will be thrown at it. So thats my game plan and you can follow me thru my build at txgarage.com.

See you at the strip,