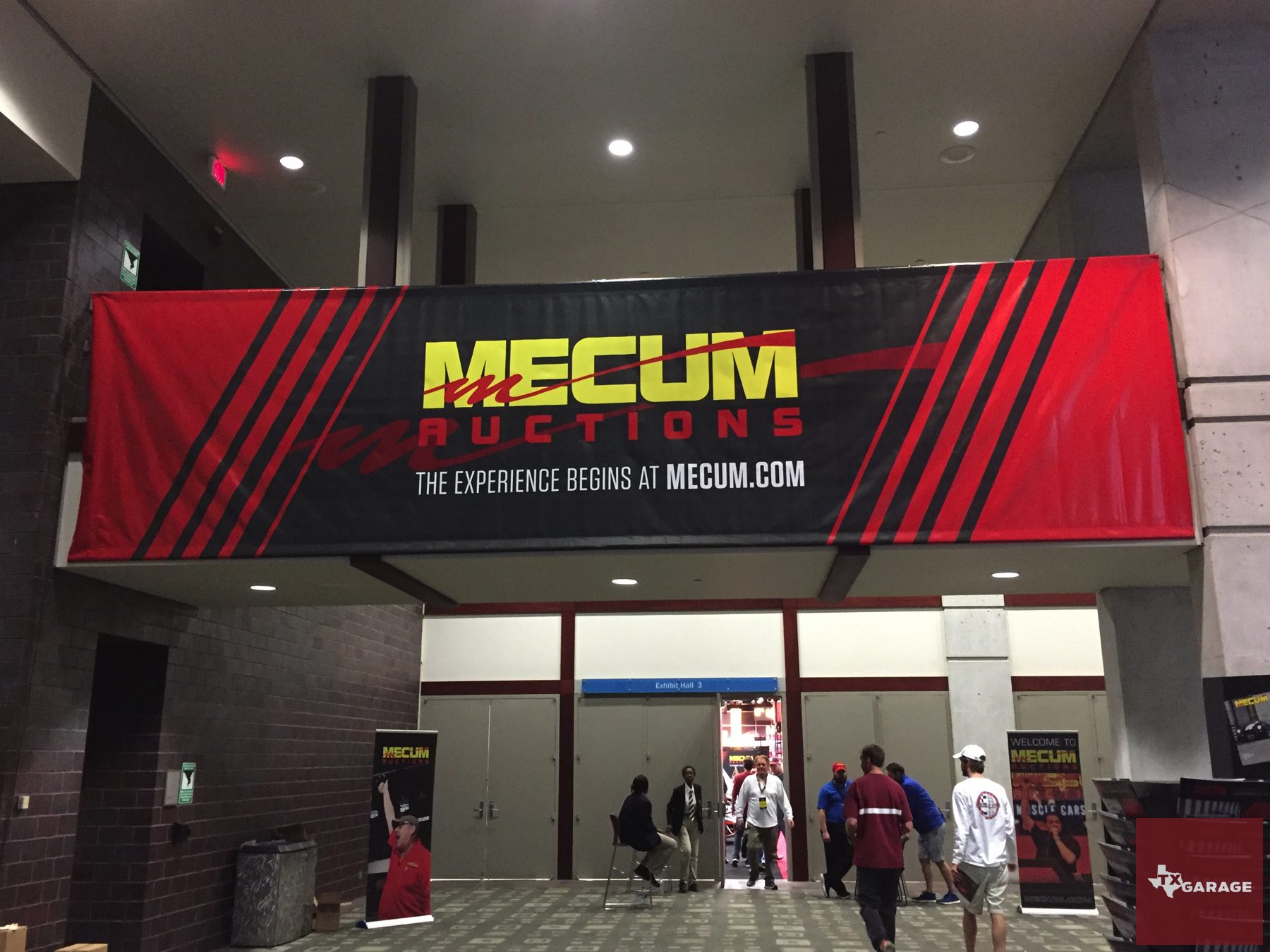 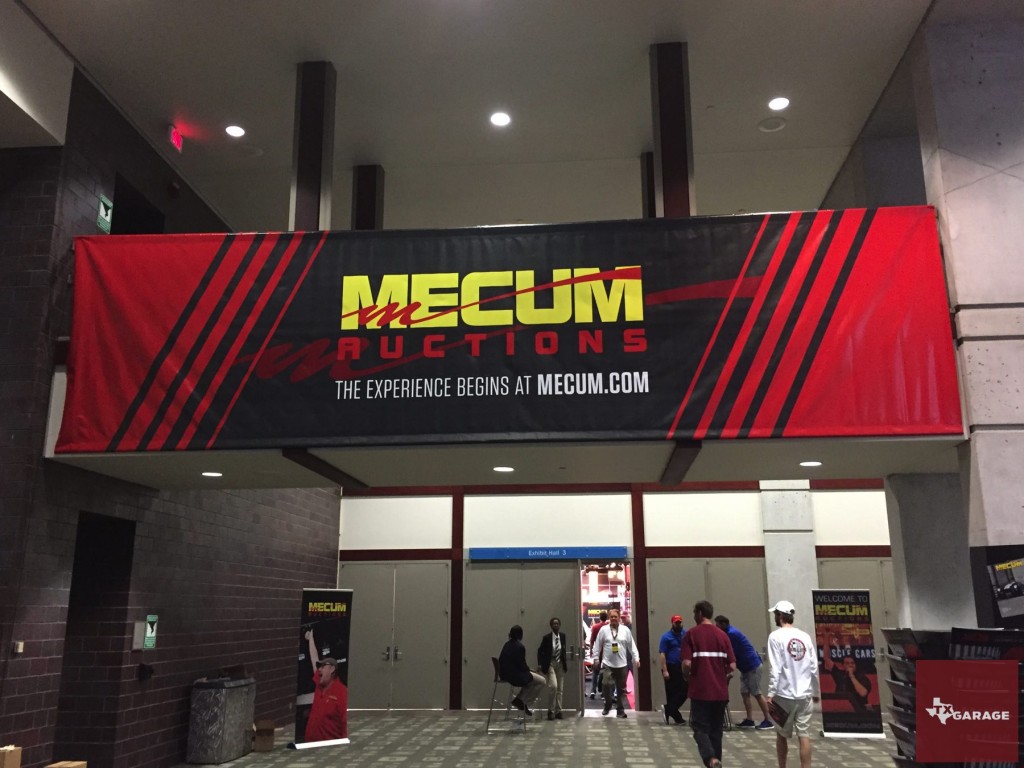 While this was my second time at a Mecum auction, it was my first time going alone. There is a certain frustration when you’re a car guy alone at a car event. You look around at these automotive holy grails – cars you have only dreamed of seeing up close and personal – but have no one to geek out with. The good news: even if not there with a checkbook, unlimited credit and a twitchy bidding arm, you can still enjoy 90% of the Mecum auction experience.

For those having not been to a televised auto auction, let me be the first to tell you – TV magic does make the auction block seem way larger than it does in real life. I am not saying it is the size of a high school drama set, but it does make a person think huh… looks bigger on TV. Nevertheless, if you have watched the auction on television then you know the subtle rush when seeing bidders get into a money fight over one of your dream cars. Sitting in the audience, watching it live, allows you and the audience to collectively feel the tension and anticipation of seeing the dollar amount go up, stall, and then start up again before the auctioneer drops the hammer. Now, I find people fascinating, I love to listen and watch how they react to day-to-day situations, so to sit among the crowd was a real treat.

As soon as a car rolls on to the auction block you hear different reactions from people. They comment on how the car isn’t their favorite color, wheel style, trim package, or model year. Or they will explain what they would do with the car if they were bidding on it; this is often a sentence involving melting tires and speeding tickets. You hear others engaging in playful bets – guessing what the car will sell for.

The Mecum auction process is just like any other car auction when buying a vehicle. What distinguishes Mecum (and Barrett-Jackson) is the television crew and the family atmosphere. There is something about a large gathering of vintage cars that draws in people from all walks of life – and not just gearheads. I was checking out a ‘24 Model T pickup (thinking how beautiful it would look at the ranch) when a large family with small children walked by to admire it as well. It turns out they were just here to admire some cars and spend some time as a family. The small children were transfixed on the old Tin Lizzie truck; maybe one of them was bitten by the car bug. 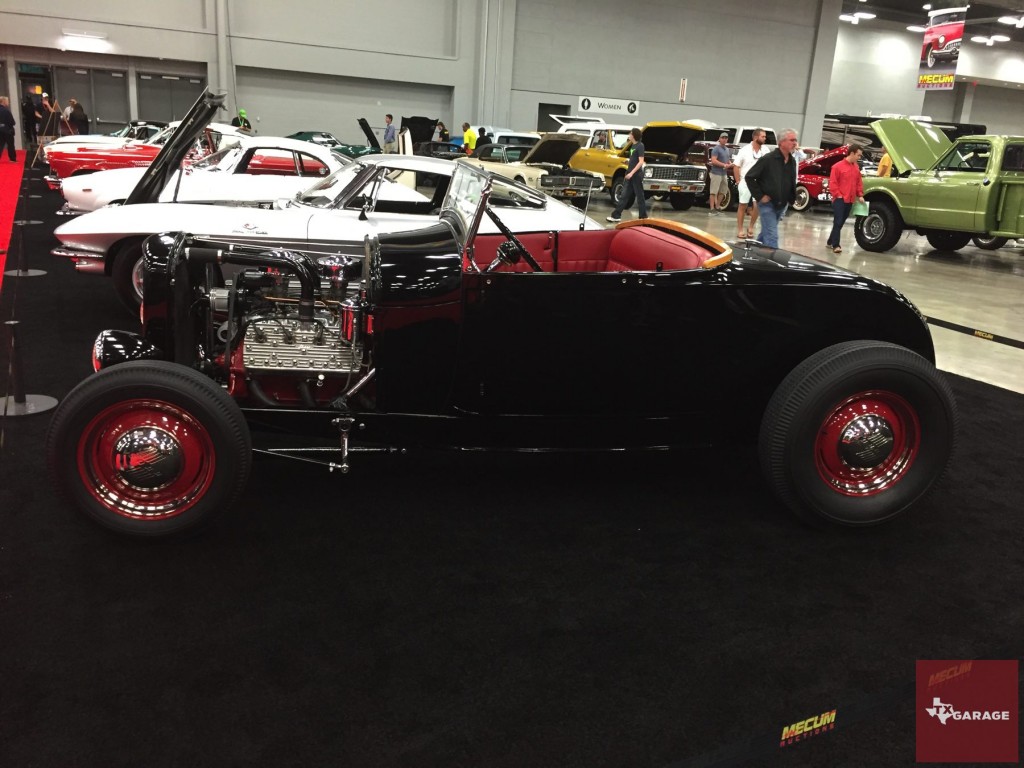 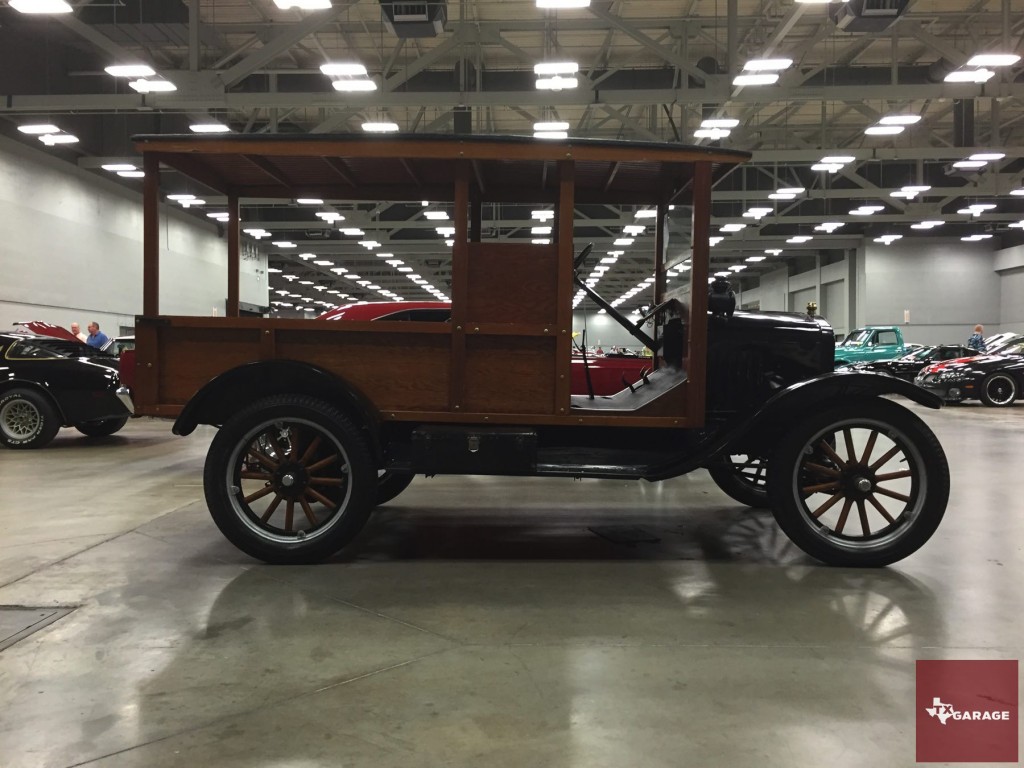 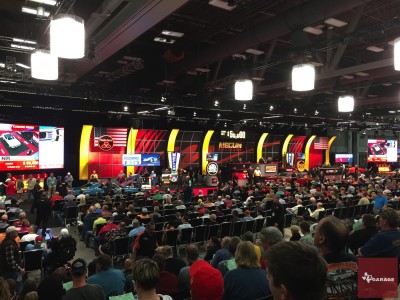 I have always felt the car hobby is one of the best hobbies for family bonding. I was reminded of this while meeting a Korean War veteran trying to take mental photographs of a beautiful, traditional- style 1932 Ford Model A hotrod. I make it a habit of thanking any veteran I come across (especially Vietnam veterans), so that’s how I broke the ice with this gentleman. He introduced me to his son and grandson, who were all huge gearheads and came down to check out the cars. He even took the time to tell me about his own hot rodding days in the early 50’s and how he had his own ’32 Ford with a rumble seat and a souped flathead V8. As a young guy, I love hearing older gearheads talk about their days of hot rodding and car-related hijinks.

There are unwritten rules when admiring a car that isn’t yours. ‘Look but don’t touch’ is the number one rule. However, at Mecum all these cars are for sale; you see people getting inside them, opening the hood…and that surprised me. And watching people kicking the tires on some of these cars – as if it was a used car lot on a Sunday afternoon – made me realize something that has been in the back of my mind lately. A lot of us get so caught up in the hype that we forget that every desirable vintage car on the market today is little more than an old used car.

I was curious to see how Austin would respond to the cars at Mecum. The city of Austin is Texas’ wildcard, so I wanted to see if the city that thrives to keep itself weird was going to insert anything unusual into the auction, and I wasn’t disappointed. The biggest seller of the event was a 2006 Ford GT Heritage Edition (with only 573 miles) that sold for $440,000. Why Ford GT’s are fetching so much money of late while still qualifying as used cars is beyond me. I saw three back-to-back no-sale cars roll across the block, cars that are known for fetching six-figure hammer drops at these auctions. Even the auctioneer showed his frustration and disbelief as each car went by without reaching its reserve.

Mopars are usually big-buck winners at auctions. In 2002, a 1971 Plymouth Hemi Cuda convertible became the first million-dollar muscle car, so when I saw a 1970 Dodge Charger R/T Hemi, with a pistol grip 4-speed, I assumed that we were in for a bidding brawl. Nobody wanted the car as the auctioneer struggled to get an opening bid and then had a slowly build up to $110,000 before rolling out with a no-sale. It was the same story for a ‘68 Shelby Mustang GT500 King of the Road fastback, a car most Ford fans consider to be the holy grail of pony cars. A top bid of $120,000 wasn’t enough to meet the reserve and rolled away. The last car was a 1970 Plymouth Hemi Cuda that was still wearing its original paint, an unrestored beauty. Bidding was strong, racking up a $165,000 bid – but still failed to meet the reserve asking price. 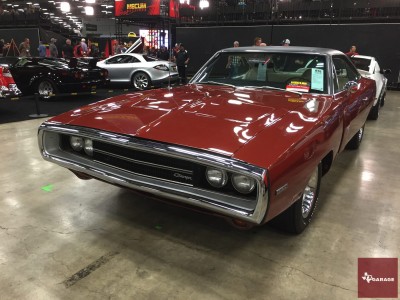 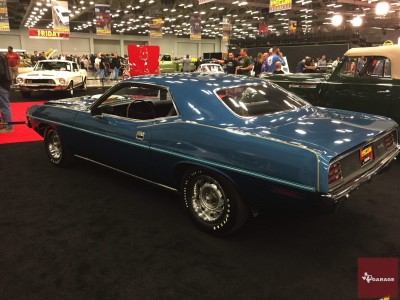 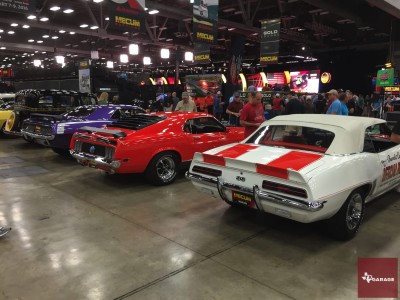 One bargain I witnessed was a 1969 Camaro set up for drag racing. The owner reported that an estimated $100,000 had been invested into the car and that it could sprint across a quarter mile in 8 seconds! The car went on the auction block at no reserve and sold for… $34,000 dollars. Another was a 2008 Chevrolet Silverado monster truck, taller than the stage where the auctioneer stood. The truck was a SEMA show winner and had four wheel steering. This was the real deal monster truck, selling at no reserve for… $27,000 dollars. But the biggest bargain came in the form of a 1969 Dodge Charger General Lee actually used for a Dukes of Hazzard film. This was an actual film General Lee that sold for $35,000 dollars, a steal even for a ‘civilian’ 1969 Charger.

There are a number of possible explanations as to why the crowd didn’t jump at the chance to pay top dollar for these muscle cars. Maybe there were too many hybrid and electric car owners in the audience, or maybe we just witnessed a shift in the vintage muscle car market. Or Austin, Texas, is simply maxed out on monster trucks and muscle cars and was looking for something different to get behind the wheel of. Whatever the reason may have been it does make a gearhead think: Why are we paying so much for these cars?

The most common explanation? Those who can afford to drop six figures on a Hemi are those who want to recapture their youth, a time when they couldn’t afford it, or ‘had one just like it’. So they try to outbid each other for their time machines on wheels. Others see vintage cars as a commodity, an investment opportunity. Both are reasons I can understand, but as many of my non-gearhead friends ask: ‘Why are they so expensive? What is the big deal? These are reserve prices I can no longer explain to them, as I cannot find a valid reason why someone would pay $200,000 for an old Dodge, or over $30 million for an old Ferrari.

We have drifted into an era where old things hold more value simply because they are old, probably due to how we treat common objects today with a replaceable mentality. We no longer want to fix anything because it is so much easier to simply replace it. So when it comes to things of the last century; cars, technology, fashion and/or simple objects, we feel a need to preserve the history of a past way of thinking. For me, this still does not identify the logic behind paying outrageous prices for something simply because it is old.

That said, there are benefits to this demand for historic preservation. Vintage cars bringing record auction prices create a demand for both parts and skill sets necessary to restore these cars in order to achieve top dollar. How many cars have been given a new lease on life thanks to someone wanting to invest the time and money to do a frame-off restoration just so they can flip it at an auction? How many specialized restoration shops have opened to fill the demand for car restorations? How many barn finds have been unearthed because people want to sell their forgotten Jaguars, Lamborghinis, and Shelbys? But, the line between hobby and business has rapidly faded, and it won’t be long until it’s completely erased.

An additional fear is that the value of these cars will reach limits that are so out of reach for the common gearhead that only the wealthy will be able to enjoy their investments as they stare at them from inside their air-conditioned showrooms. If a car is too valuable to be taken out for a Sunday drive, then what is the point of owing it? My sincerest admiration goes out to those who do drive their six-figure or seven-figure cars on the road and enjoy them.

I own a few vintage cars and I cherish them, not as an investment or future financial gain but for the love of the hobby. I enjoy tinkering and driving them, and continue to appreciate the purposes behind their design and manufacture. As I was leaving the auction I overheard a small child talking to his dad about a red 1970 Plymouth AAR ‘Cuda. He couldn’t have been more than ten years old, explaining to his father why this car was so rare and valuable. It warmed my heart, knowing generations after me are still interested in old cars. But you have to wonder…what will the market will be like by the time the kid is old enough to drive? And that’s if, of course, we’re still driving. 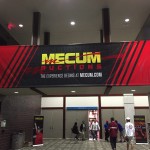 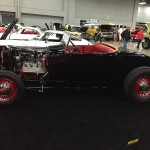 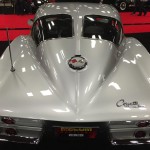 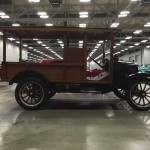 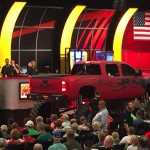 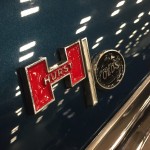 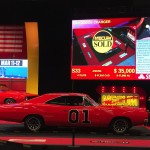 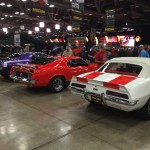 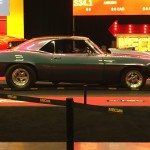 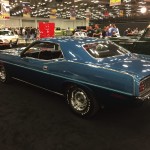 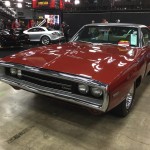 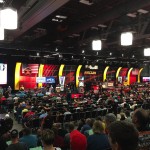