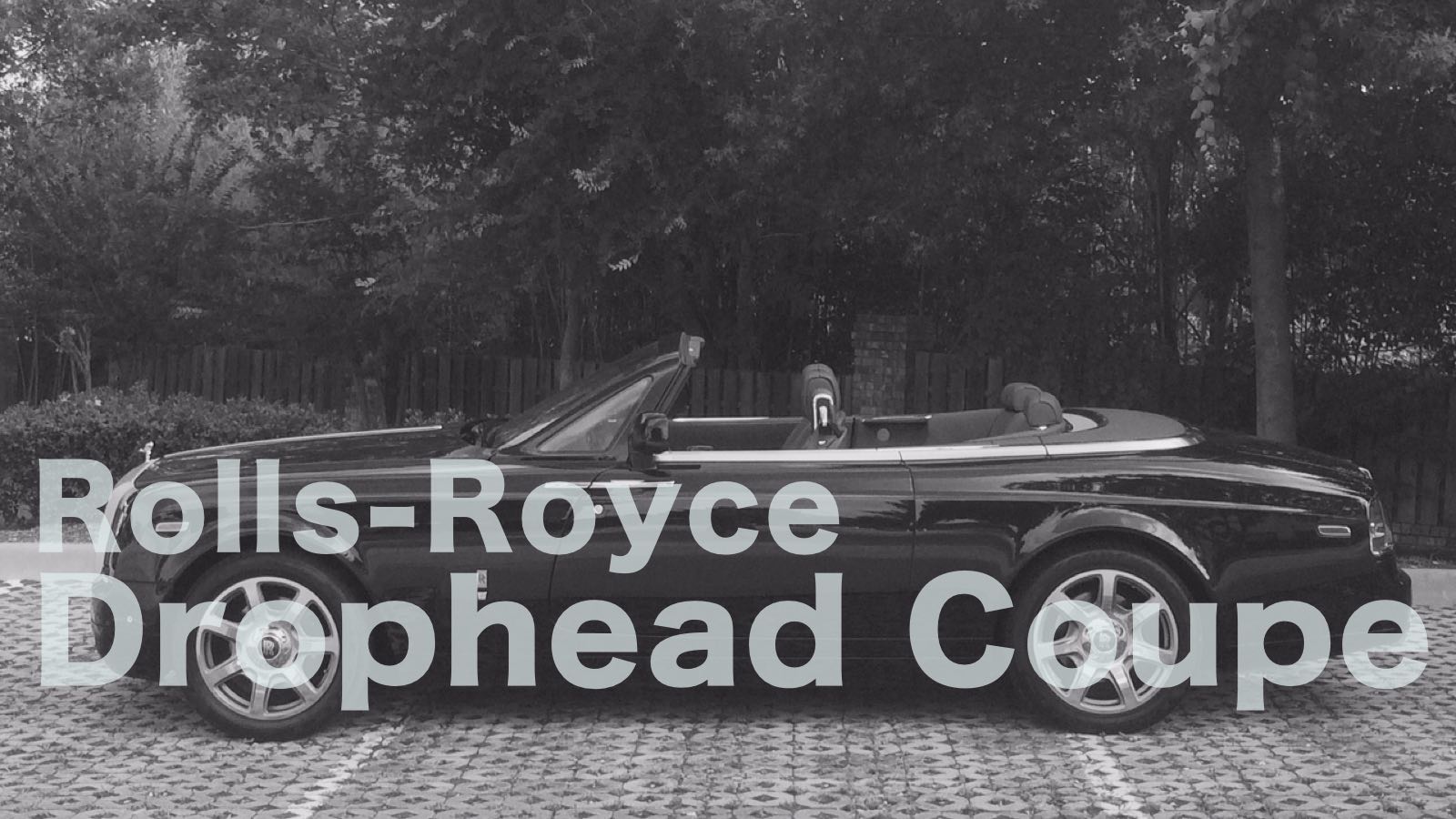 With a respectful nod – but no curtsy – to Queen E on her 90th, I’m looking at the Rolls-Royce Drophead Coupe from my second floor office. And despite its smaller relative size when you’re above it (as opposed to sitting in it), even from here I feel spectacularly unworthy.

My first recollection of a Rolls was via television, where actor Gene Barry, playing detective Amos Burke, appeared in Burke’s Law. At about the same time I was reading author Ralph Stein’s descriptive of Rolls-Royce in his coffee table tome, The Great Cars. The TV series spoke, of course, to the car’s opulence and – by extension – celebrity, while Mr. Stein’s reporting centered on the car’s engineering and (even then) historic durability. Either way, Rolls-Royce etched an almost indelible impression. And while I never aspired to own one, I – like millions of others – always take a second look when a Rolls-Royce passes by.

At a moment in which societal trends are marked by Hillary-this and Donald-that, rather than provide you with impressions probably at odds with each other, I’ve elected to take the online overview supplied by Rolls-Royce’s marketing team and – once that’s digested – attempt to supply you with my take on their take. It won’t be at all similar to the treatment the Wall Street Journal’s Dan Neil would give it, but then, Dan would drive his Drophead for a month in and around Morocco, while I have it for but a few days in North Texas.

Born to be Bespoke

Imagine a Phantom Drophead Coupé that’s entirely unique, commissioned to meet your wishes. Specify the colour of the soft-top. Bring out its sociable nature with a hidden refrigerator beneath the teak floor of the picnic boot, or a set of monogrammed glasses, held elegantly in place in personalized holders. Bespoke is the ultimate luxury.

Much of the cost associated with buying a Phantom – any Phantom – is those costs associated with customization. My only association with that was when, years ago, I commissioned a custom bicycle. And I can assure you, the cost of a custom bike won’t provide you with a pinstripe on a Phantom Drophead. Our test vehicle, with a base price of $492K, had another $80,000 in factory and/or dealer options. Now, if a Drophead prospect is comparing the Phantom against a motor yacht or turboprop Beech, the Rolls will seem like so much spare change. But if you’re comparing it to the costs associated with operating a 3-year old Subaru, the window sticker will simply stick in your throat.

Sixty pairs of highly skilled hands. That’s the level of artisanship that goes into building every Phantom Drophead Coupé at the Home of Rolls-Royce. Each detail matters – the five coats of paint on the bodyshell, the bookmatched veneers and the hand-stitched leatherwork. Perfection is our benchmark.

I’m not sure we saw tangible evidence of Reagan’s trickle-down economics in the ‘80s, but you may see it in the construction of a Phantom Drophead Coupe. If Rolls-Royce is essentially building it by hand they’ve not invested in machinery; they’ve invested, instead, in people. And for every skilled set of hands doing the heavy lifting, there needs to be a viable apprentice program for when that older set of hands inevitably wears out. The aforementioned costs associated with any Rolls are outrageous, but at least the purchase of a Phantom keeps food on dozens of tables, and roofs – presumably – over hundreds of heads.

The overall appearance of Phantom Drophead Coupé has been designed to give the impression of an elegant motorboat at speed. Offering teak decking and a high waistline that tapers back like a boat-tail. With just the touch of a button, the convertible roof lowers, allowing you to embrace the elements.

It is just a touch of a button. And for climates where you can enjoy open-top motoring most months of the year, a Drophead Coupe is a no-brainer. In Southern California, you can drive through Newport Beach with the top down during most of a 12-month calendar, whereas in Texas it might be one-fourth of that. But behind the wheel of a Drophead Coupe, the experience is absolutely sublime; you’re of the day but not really in the day, cocooned in a way that is fully 180 degrees removed from the cacophony that normally accompanies top down motoring.

The nautical theme continues inside the cabin. Features are handcrafted in the finest natural materials: leather seats, teak veneers and a luxurious cashmere-blend hood (top- ed.). Protecting you from adverse weather conditions, the 5-layer soft-top provides excellent sound-proofing and opens in just 25 seconds.

The Drophead’s cabin is ‘indulgent’, but not – thankfully – self-indulgent. In fact, we were surprised by the obvious restraint in its design and execution. The leather won’t be confused with anyone’s MB-Tex, and both the white instrument dials and the black stained ash dash were delightful to view and contemplate. Until – that is – we take a look at the Monroney and discover the white dials are $8500 and the ash is $8350. Either figure will get you a Sportster, while the combined figure will buy you a Fat Boy. But we digress…

Functionally, it’s easy to imagine an evening run for Mexican, whether your destination is Uptown Dallas or downtown Santa Fe. And it needn’t be just you and your spouse; you have room for a close friend and his or her spouse. And while in the car, doing 40 and with roughly 90% of the convertible’s prodigious power still in reserve, you could talk or listen to Sirius Channel 69. That’s the Escape channel, with the Johnny Mann Singers on the playlist. If Johnny’s still around, he probably drives a Rolls.

Powered by the same 6.75-litre V12 engine as Phantom but with a shorter wheelbase, Phantom Drophead Coupé exudes sporting spirit. With a low center of gravity and slightly rear-biased weight, the drive is as breath-taking as it looks.

Our Phantom didn’t go to the dragstrip, nor did it go to a strip mall. We can tell you this: you’ll never experience a power deficit while behind the wheel of a Drophead Coupe. Driving the rear wheels through an 8-speed automatic, the naturally aspirated V12 delivers 453 horsepower and 531 lb-ft of torque. Or, as Rolls-Royce suggested for decades, screw the actual numbers…the available power is more than adequate.

And with that, our journey has ended. But so has the almost overwhelming paranoia that goes with piloting a car costing as much as a large home in a decent zip code. Obviously, the almost-$600K window sticker of the as-equipped Drophead Coupe is significant, but for the target demographic, with several homes and many cars, the convertible Rolls is no step at all. If shopping at an R-R dealership we’d be inclined to go smaller (Ghost), and with the roughly $400K not spent dabble in Ferrari, Porsche or Aston Martin. But for those with a trust fund or signing bonus, this is one mighty big bang for your mighty big buck.