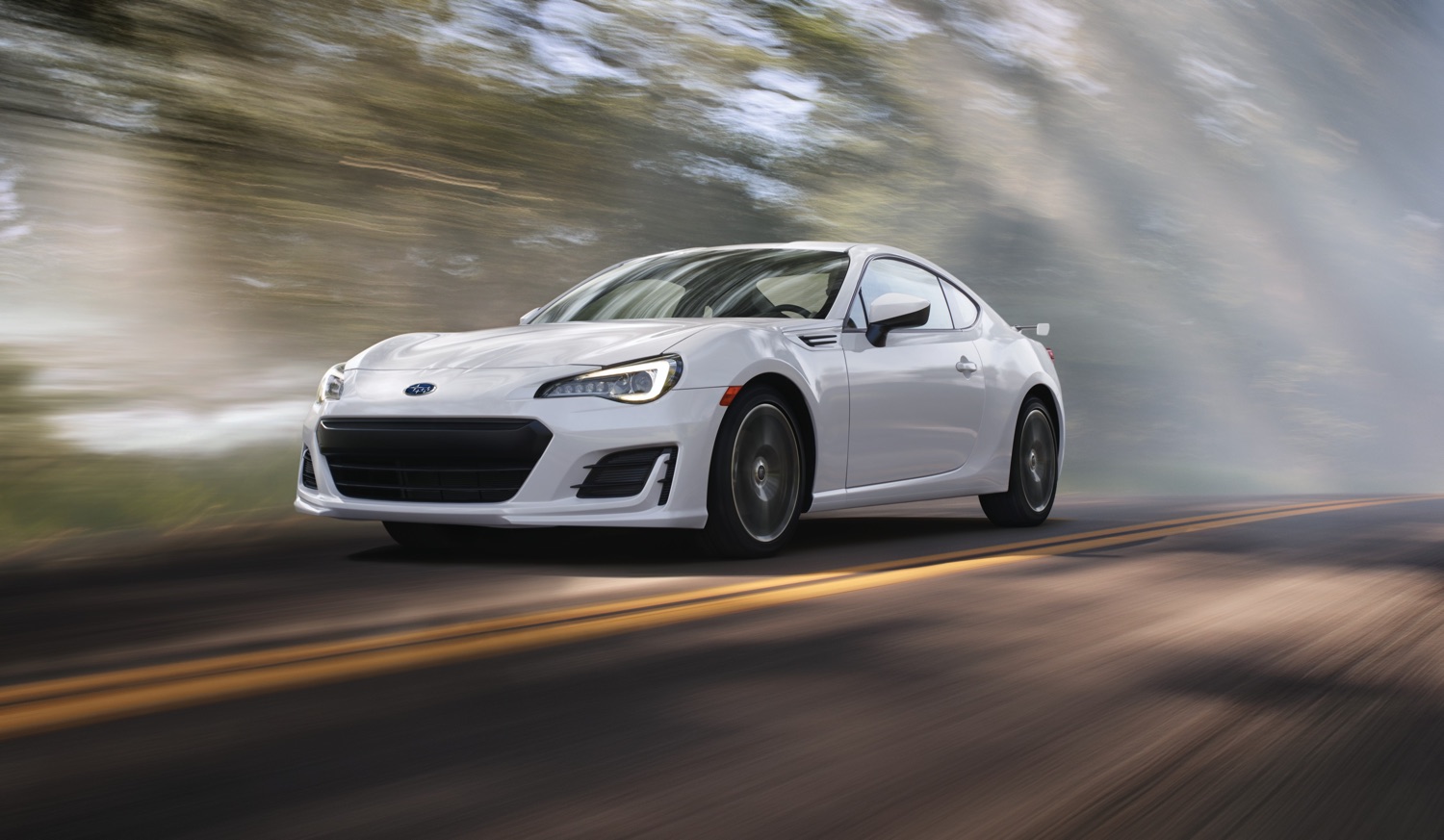 At various points in life you’re drawn to something selfish…for a few, it might be at many points in life when inclined to do something completely self-centric. I fall somewhere in between, enjoying the chance to – over the years – ride my Guzzi, Ducati or Bonneville (pick one), while keeping the investment in those bikes – just one at a time, thank you – relatively modest. With a bike I’ve never been able to justify a sports car, given the expense of a new one or maintenance of an old one. But for the guilt-ridden or perpetually deprived, Subaru has an answer: the sports car as a daily driver.

In its Subaru BRZ, designed and built in collaboration with the Toyota Mothership (and introduced in Toyota showrooms as the Scion FR-S), the Subaru team has come up with a d*mn compelling reason to opt for a tightly drawn 2+2. Starting with a 2.0 liter flat four, the engineers and design team laid out an almost perfectly balanced rear-wheel drive platform, coupled the 200 horsepower four to an oh-so-crisp 6-speed manual, provided 2+2 seating (because you might have small friends) and enclosed it in attractive – albeit slightly anonymous – coupe bodywork. The end result is a M-F workaholic, and also someone you might go running or riding with on a weekend. If it were an actress, think Anna Kendrick.

It’s difficult to think that it’s been 5+ years since we drove the Scion version of Subaru’s BRZ, and while the platform has enjoyed a host of refinements over those five years, the essential recipe remains the same. For 2017 horsepower has been raised incrementally, one of those changes where you wonder why they bothered; it’s now 205 at a heady 7,000 rpm. Additionally, chassis reinforcements enhance an already rigid structure, revised springs, shocks and a larger rear stabilizer improve – we’re told – responsiveness, and they’ve spent money on redesigned bumpers and headlights when we continue to wish they had given us fifty more horses!

Our ’17 BRZ was equipped with Subaru’s new Performance Package, which is available – for a price – on Limited trims equipped with manual transmissions. The additional bucks (our test vehicle windowed for just under $30K) bring you Brembo brake calipers in combination with larger rotors, SACHS Performance shocks and exclusive-to- the-package 17-inch x 7.5 inch black alloys. Finished in a muted – albeit not matte – silver metallic finish, this is the Porsche 912 we might have owned in ’69, had we had any money (at all) in 1969.

Despite ongoing complaints – that’s the polite descriptive – regarding the Subie’s power, propelling just 2800 pounds these 205 horses do just fine. No, the small of your back won’t affix itself to the BRZ’s all-enveloping buckets, but neither will you doze off waiting for 60 miles per hour to arrive. It’s an old, overused adage, but if you’re of the school preferring to go fast in a slower car rather than slow in a fast car…Subaru’s BRZ might be your ride.

That doesn’t, however, suggest you’ll go slow all the time. Find a corner – any corner – and the juices flow immediately from your eye to the right foot. Drop a gear, jam on the throttle and suddenly you’re McQueen at LeMans…if, of course, Steve was driving a Sprite in pursuit of that race’s Index of Performance trophy and not Porsche’s 917. Having made the Porsche analogy earlier, it bears repeating: If a driver of a 912 had enjoyed this menu of handling, balance and safety – in combination with 205 horsepower –that you can enjoy forty years later in a BRZ, he would have thought he’d have died and gone to Zuffenhausen. This coupe is that good.

Inside, the dash isn’t quite the visual desert it was in ’13, with soft touches here and there, along with attempts to imitate leather there and here. You’ll not confuse this with an Audi TT, and we knew that going in. But could the Subaru/Toyota team at least allow us to confuse it with a Miata? With that, the relationship between the wheel, shift lever and pedals is just about perfect, and if you wear your newly-purchased Total Eclipse eyewear you’ll hardly notice the visual shortfalls of a dashboard that’s, well, bored.

A Subaru PR exec tells me the BRZ enjoys one of the youngest demographics in the marketplace, and given its ‘this could be my one car’ practicality I’m not surprised. If the Miata is seen as a reward for steady employment and getting the kids through college, the BRZ might be viewed as the reward for obtaining employment after getting through college.

That, then, begs this question: As an underemployed college dropout can I still buy one?

Also check out Adam’s video review of the BRZ!