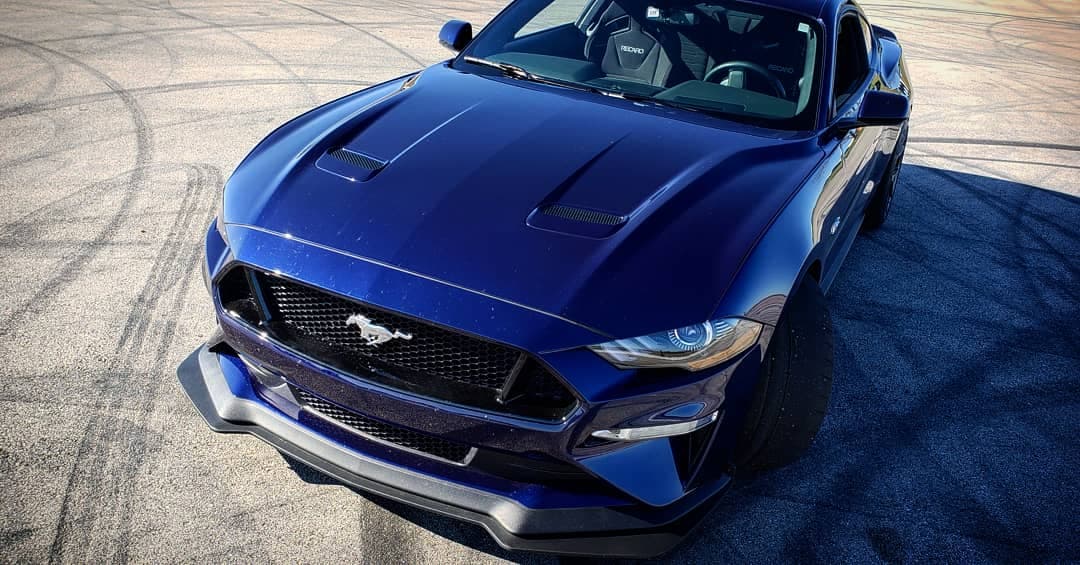 The Ford Mustang is often associated with the beginning of the “options list” on a people’s car. This reporting features a Kona Metallic Blue 2018 Ford Mustang GT, but the review will focus on Ford’s GT Performance Package Level 2, a $6,500 option for the Ford Mustang. It is also the top tier performance package (not counting Ford’s Bullitt Mustang) before the Mustang jumps into Shelby territory. According to Ford, the PP2 includes the following:

Basically, all of that makes the Ford Mustang respond quicker, turn faster, and stick to the road better than ever. Match that with a 6-speed manual transmission (or optional 10-speed automatic) and you get a daily sports car that feels like a weekend track racer. During this review, I visited Harris Hill Raceway in San Marcos, TX to determine if the Mustang’s PP2 lives up to its price tag.

This 2018 Ford Mustang PP2 was equipped with Michelin Pilot Sport Cup 2 tires; they look like NASCAR slicks wrapped around 19-inch aluminum wheels. They are summer-only tires. (The delivery driver warned me to be extra cautions if it rained.)

Mother Nature gave me the opportunity to test out these near slick tires at highway speed during a mild rainstorm. I kept both hands at the wheel in anticipation that it would suddenly go numb as the car began to hydroplane. Nothing even close to that happened on the two-hour drive between Laredo and San Antonio. Obviously, if you tempt fate by driving like you’re on a track day during a rainstorm you will find yourself pointing in the wrong direction. Just slow down in bad weather or take the beater car instead. These tires are also very slippery when cold, so if you’re catching a January Cars ‘n Coffee, tread (pun intended) carefully!

On the track, these tires are fantastic. Once these Michelin tires get toasty warm you can use them to extend the edge of your own driving limit. The Harris Hill Raceway  offered the perfect course to test the PP2. The track has a fast straightaway, swooping turns, and even a Laguna Seca-like corkscrew, with a downhill plunge into a blind left turn.

After learning the track I started doing hot laps in the PP2 Mustang. To find the edge of its traction I practiced braking as late as I dared and hammered the throttle leaving each turn. The Mustang dug in and stuck like glue. Even when I pushed it into oversteering the grip allowed me to snap the rear end back like a snake’s tail. The cherry on top is the Mustang’s 460 horsepower, 5.0 V8. It sounds like Thor gargling whiskey as it pulls you forward from zero to 150 miles per hour faster than I can write it.

As shown, this 2018 Ford Mustang GT PP2 had an MSRP of $44,490, which is good value for a racer you can drive comfortably in traffic during the work week. The Mustang PP2 averaged 17 mpg over 600 miles during the week, and can get up to 25 mpg on the highway. The ebony Recaro bucket seats may not be ideal for long distance road trips, but they look so cool and serve as the bow on this performance package.

In sum, the GT Performance Package Level 2 is a wink-wink track pack for your Mustang. Other journalists have raved about this package – it really is that good. Thanks to its independent suspension, a standard Mustang GT handles very well, and is capable of a solid performance. A PP2 Mustang takes that and dials up the volume. It no longer aspires to track days; it actually does track days, while drag strips are an afterthought. It will make you wish Interstates had corners. Fast corners. (And state troopers served only as safety marshals.)