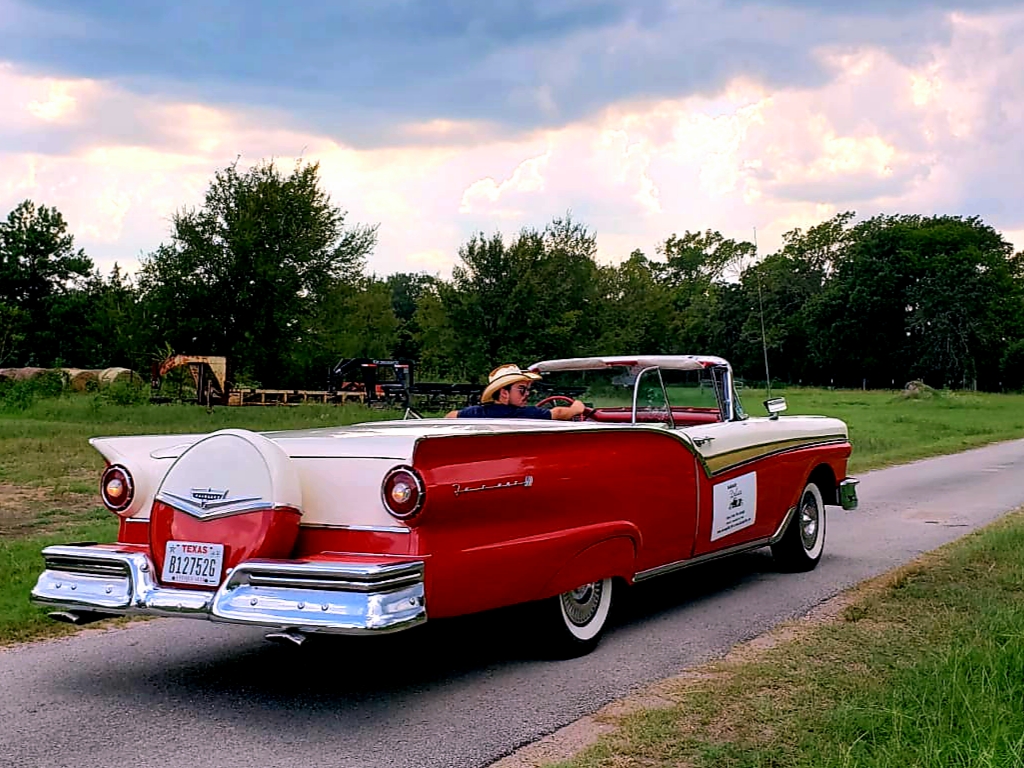 The Ford Fairlane 500 Skyliner was the top tier trim level for the Fairlane in 1957, featuring a new retractable folding hardtop. The Skyliner’s wheelbase was several inches longer than a regular Fairlane 500, because it needed to hide an entire roof in the trunk, giving the car an almost Ford Ranchero look. Seriously, the Skyliner’s rear looks like it should be breaking the Internet. (Kardashian big!) But what’s it like to drive a personal luxury car from an era of lead-based paint, second-hand smoke, and Cold War paranoia?

The Fairlane belongs to a good friend, podcast co-host, and fellow TAWA member Greg Riley. I want to thank him for trusting me with his collector car. This 1957 Ford Fairlane 500 Skyliner has only 9,700 miles since its full restoration.

The ride quality was better than a Rolls Royce. When you’re driving a Rolls Royce you are constantly reminding yourself that the ride quality is supposed to be the best. It has to be! You need that BMW 7 Series – for comparison – to feel like a Rolls is worth half a million. Riding in the ’57 Ford Fairlane was floating in effortless comfort, without the high expectations; it’s a 62-year-old car. Driving the Skyliner was like sitting on a sofa surrounded by metal and chrome. Plastic seat covers made me think of grandma’s house minus the cookies, because nobody likes crumbs!

Yeah, the interior squeaks and rattles, but that’s the way they were back in the day. The interior is a cocktail of metals and vinyl, so everything makes a noise. It’s a small price to pay for a ride quality that had me wondering if I could hold a full glass of wine while going over a speed bump.

The reason why we tend to call cars like this land yachts is because of the floating sensation on the highway. You feel like you’re driving a boat, ‘cause you have no feel in the steering wheel. There are about 3 inches of travel in the wheel before the car responds by wiggling its frame as if it was dancing. In a straight line, I was sawing at the wheel to correct the car’s wandering wheels.

As you’d guess, this car has a very passive attitude. It does not care about lap times, top speed, 0-60 times, or being practical in any way other than looking cool. Once you get used to the Fairlane’s response time and weight you can have fun aiming this car into a turn and feel its two tons surf the blacktop sea.

This model was optioned with the normally aspirated Thunderbird 312 V8, with 245 HP under the hood. It sounded assertive, with Captain America levels of confidence giving me all the low-end torque I could ever want. I put my foot down to test the Fairlane’s reflexes, but the Ford just grunted as if to say, “Don’t rush me! You’re wasting gas.”

It will not do a burnout (I checked). The car was built for cruising at 12 miles per gallon.

The Fairlane was still sporting its original drum brakes, which meant stopping distances had to be calculated well in advance. I found myself pumping the brakes with both feet, doing my best impression of ABS. I kept wondering if this car would do a handbrake turn if I had access to an airstrip long enough to bring this chrome barge up to speed.

The Best…and the worst: The best thing about driving a convertible from the 1950s is that you are officially the coolest motorist on the road. This car transcends material showboating like brand and price tags by being a work of art on wheels. Cars will never look, feel, or drive like this. This old Ford can outshine a seven-figure supercar without needing to go over 35 MPH. Plus, seeing the roof pop out of a trunk is a thrill to watch.

The worst thing about driving this car was the anxiety of getting T-boned by a dummy snap-chatting in a Honda CR-V, or singing to whatever over-produced melody is currently playing on America’s top 40. Yes, this Ford was built like a tank by people who probably drove tanks during WWII (they knew tanks!), but old cars don’t crash well. Basically, if that Honda CR-V struck me head-on the first thing going through my mind would be the steering column, followed by the V8 falling on my lap to tell me what it wants for Christmas. This is a car from an era where seat belts were an option, one very few people checked on a build sheet.

Again, I want to thank Greg Riley for allowing me to drive this car. I would want to mention that you can listen to Greg, me, and fellow journalist Natan Tazelaar talk cars and play music every Saturday on our podcast: Garage Dlx.FM, on the Live365 app and Alexa.

Toyota’s 2019 Tacoma:
You build yours, we build ours
Have you herd? Transcending Borders with Chevy’s Silverado Trailboss
Event Calendar