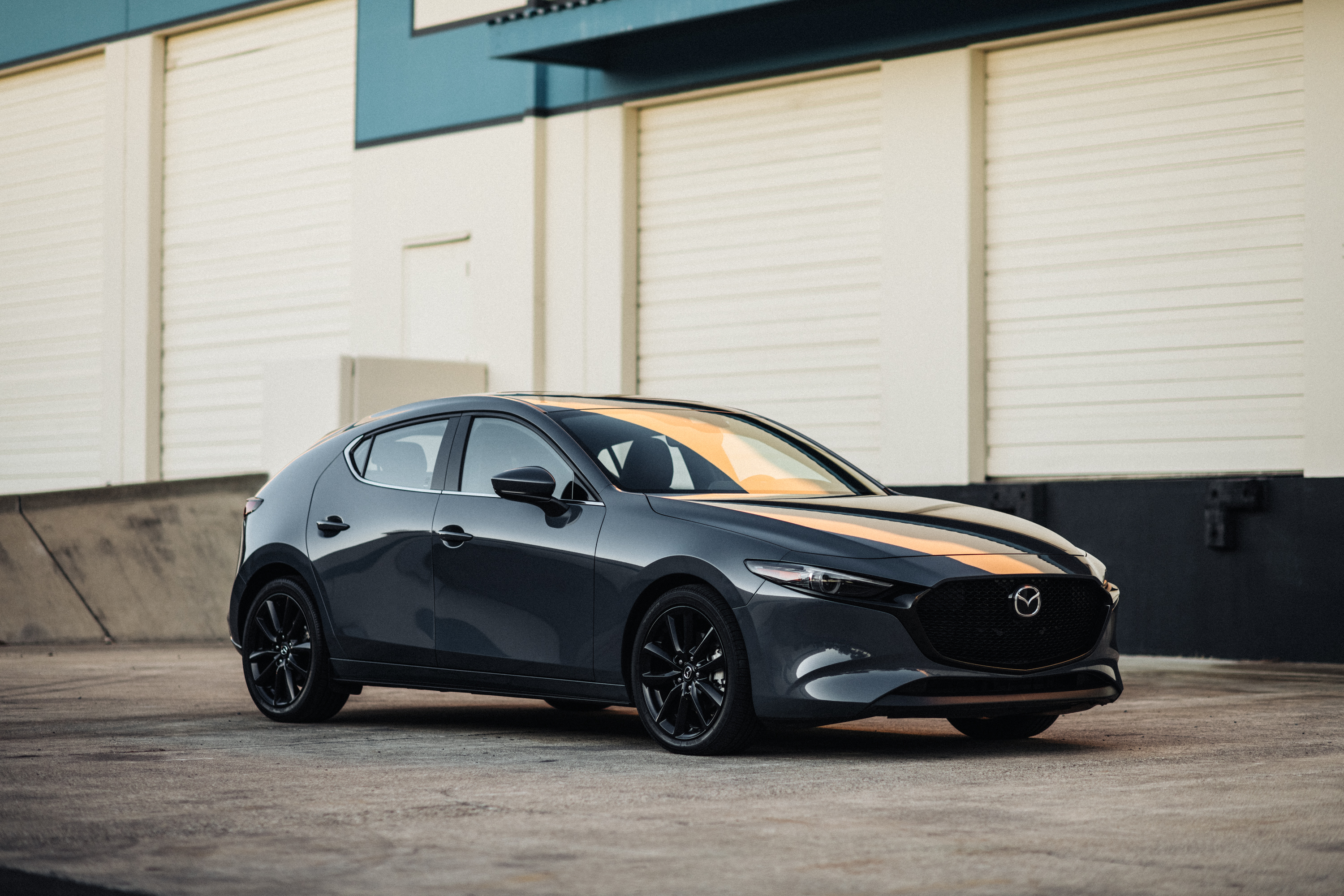 Near the end of January, with Ford v. Ferrari disappearing in our collective rearview mirror, folks connected to motorsport in this century will gather in Daytona, Florida for the Rolex 24 Hours. The Le Mans race may be better known, but there is no tougher contest than a day – you know, 24 hours – spent between Daytona’s banking and its infield road course. For both cars and drivers the net effect is like swallowing a spicy chicken wing, and then washing it down with spicy barbecue sauce; it ain’t for the faint of heart.

Mazda’s motorsport arm will be at Daytona with its Mazda3 TCR. TCR cars utilize production-based hatchbacks or sedans, and the resulting race cars must be constructed using the production bodyshell and chassis. The end result is a racecar that actually resembles its production counterpart, a concept NASCAR abandoned 50+ years ago. And while our test Mazda3 hatch is one compelling piece of automotive design, its TCR derivative absolutely rocks.

At about the same time as the new-in-’19 Mazda3 hatchback and sedan made their debut, Mazda had embarked on a wholesale update of their retail environment. This, of course, is something OEMs seemingly do all the time, and a drive down Dallas’ Lemmon Avenue will leave you wondering how it is that BMW or Audi felt it necessary to expend big monies on showrooms that were anything but dated before the remodels. But that is the way of the automotive world, where big boxes get the money, even as more consumers gravitate to online shopping.

To Mazda’s credit, they have more to talk about than simply bricks and mortar. The company is attempting to extricate itself from the entry-level spot it has historically occupied, which is where you land when you can’t do Toyota or Honda volume, and don’t want to buy that volume like Nissan. Of course, the upward move should start with the product; happily, Mazda product is very good, and consistently gets better. But a new showroom accentuates what they’re attempting to do in their lineup, which is creating automobiles and crossovers that can stand up in a comparison to anything Asia or Europe might throw at them.

And what the Mazda product team created is compelling. The new-for-’19 Mazda3, as either a sedan or hatch (but especially as a hatch) looks like someone’s idea of a concept, rather than a car you’ll actually see on the showroom. From its distinctive front fascia to the aggressively angled windscreen to the bodywork’s subtle side sculpting, the Mazda3 hatchback is aggressively – and expressively – removed from VW’s Golf, Ford’s Focus and/or Hyundai’s Elantra GT.

In combination with the new and decidedly upscale sheetmetal is a solidity in the Mazda3’s construction, careful attention to detail on the inside and – when opting for ‘Premium’ trim – an upscale look and feel that easily competes with Audi’s A3/A4 and BMW’s 3 Series. We’re not completely sure of the infotainment’s functionality, taking at least two steps to change a station. But relative to some ideas regarding infotainment, this is more 30-something than 20-something, and I feel ten years better.

However, if Mazda is going to take on the big guns in the near-luxury segment, it needs to bring to the table bigger, uh, guns. I get that the company’s zoom-zoom mantra may be too youthful or whimsical for what Mazda now aspires to be, but you won’t get people cross-shopping the Ultimate Driving Machine with a drivetrain that’s ultimately non-descript. Here, then, is what I’d do in creating a compelling hatch:

First, with all-wheel drive now available in the Mazda3, we’ll keep it, but hook it up to roughly 300 horsepower of turbocharged 2.5 liter four (an engine available on both the Mazda6 sedan and CX-5/CX-9 crossovers), which would be a credible enhancement over the stock 186 horsepower currently under the hood.

For dynamics, we’ll look to Volkswagen’s Golf R, a more mature take on the hot hatch than offered by Ford’s Focus RS or Honda’s Civic Type R. And for bodywork mods, pointedly no fake venting or scooping; rather, we’ll take all of what Mazda crafted for its TCR, minus the rear wing. We’re not – and upscale customers are not – ready for takeoff.

On the road, we wouldn’t get sucked into ultra-large wheel diameters and razor-thin sidewalls. Better – we think – to stick with something having a real sidewall, so you don’t have to tip-toe over today’s declining infrastructure. This would be a hatch for urban mobility, suburban errand running and the occasional track day, so it should have rubber – and a ride height – appropriate to all three.

With 300 horsepower, a torque figure well north of that, and the assurance provided by a performance-oriented all-wheel drive system, Mazda would have an S3-like motorcar with the seasoning to attract those that can afford it. We think a figure of under $40K would be good, while right at $35K would be better. Hyundai, with its Veloster N, is showing what can be done. And I’d suggest to Mazda’s execs that you shouldn’t have to go to a Hyundai showroom to see it being done.