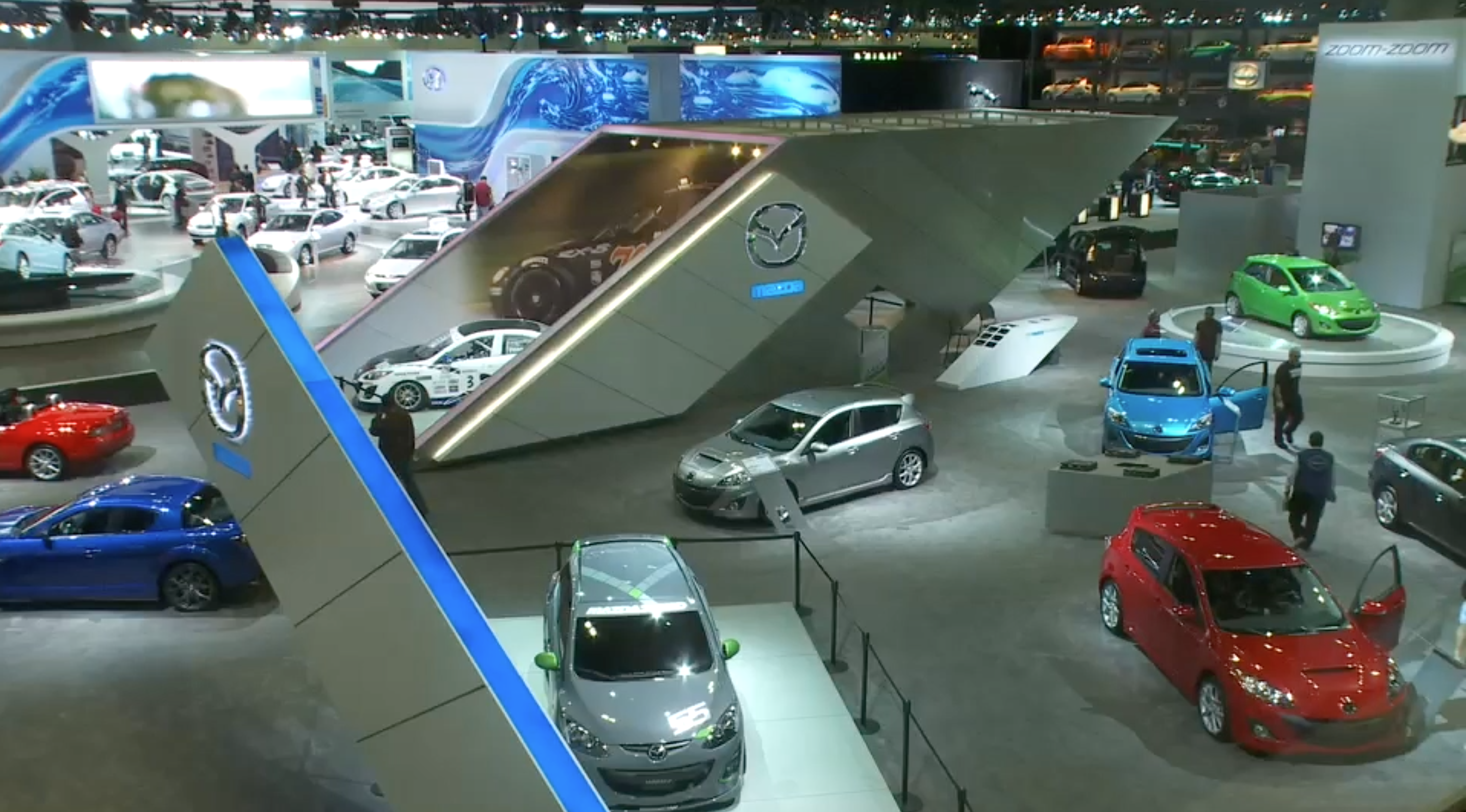 How the auto show becomes a show.

Contributor Marty Haynes, recently retired from American Suzuki after 45 years, spent nine of those years managing the company’s auto show presence at locations across the country, while spending the balance of that time working in 11 positions across three Suzuki divisions; most of those were in motorcycle/ATV.

With the recent postponement or cancellation of many auto shows (Geneva was canceled, while New York, Dallas and several others have been postponed), we asked Marty to give us some idea of what goes into an auto show’s planning and set-up.

How do we get from here…to there?  From an empty concrete space to a beautiful auto show display?

When you walk into an auto show and see the bright lights, shiny cars, attractive women and handsome men presenting the cars and trucks, there is little indication of what’s transpired to get to that point.  Probably few folks even think about it – and even fewer may care!  But auto shows remain very important to the marketing efforts of the manufacturers, as studies continue to show that 20-25% of auto show attendees plan to buy a new car within the next 6 months!

The whole show process starts six to ten months before the show’s scheduled opening when the promotor – the owner of the show – announces space for sale to the manufacturers.  The promoter is usually the local auto dealer association (for example, the New York International Auto Show is owned and promoted by GNYADA – the Greater New York Auto Dealers Association), but some others are owned by promotion and event companies that may own and promote other, non-automotive events.

As the National Manager of Auto Shows and Events for Suzuki (and not Mazda, whose display is depicted in the attached photo) I was responsible – soup-to-nuts – for our participation in 66 auto shows, from Oklahoma City to Nashville to New York and L.A..  As you could guess, some shows are larger than others, of course. Shows are typically classified as A, B and C shows.  “A” shows include Detroit, New York, Los Angeles, Chicago and Miami.  And that’s where the big budgets go…especially Detroit, at least back in the day. (I’ll have more on Detroit later…)

So, several months before the show an OEM signs a contract to rent a certain amount of space.  Smaller OEMS need at least 50,000 square feet, while the majors use several hundred thousand.  Plans are made as to which elements will be involved in the space…whether to use overhead lighting (only the larger shows and larger budgets), what kind of flooring to go over the concrete floor, what display elements and what personnel should be there…and of course what vehicles (the stars of the show!) to display. Much thought goes into which vehicles, which trim levels of each and which colors are displayed.

A few days before the show starts, the local lighting supplier installs the overhead elements for lighting, then we arrive and hire local workers to install the carpet, and get carpet cleaning chemicals to get it clean after, assemble the displays and place the cars.  The Product Specialists arrive the day before, staff the display to answer questions and be the representatives for the OEM on-site.  When the show’s over other labor personnel tear down the displays and re-pack them in their containers for shipment to the next show, where those materials are again required.  Then we start over the next week in the next town.

Very reliable word has it that GM and Ford regularly spent close to $200 Million (yes TWO HUNDRED MILLION DOLLARS) just on the Detroit Auto Show, back in the day.  And what was then the Chrysler Corporation was not far behind.  Those OEMs started the day after Thanksgiving with ‘the install’, working around-the-clock with 50-60 union laborers 24/7 until the Press Days opened in mid-January.  Their displays typically were two-story within Detroit’s COBO Hall, with escalators and VIP hospitality areas built-in.

And…a gotcha!  Promotors typically price space rental based on the prior year’s attendance.  And the big shows became engaged in falsification of that reporting to boost revenue!  One year the Ford Auto Shows manager secretly had reps go to each ticket kiosk at the beginning and the end of each show to purchase the (serialized) tickets…thereby calculating the actual tickets sold for each show.  That ended the false reporting!

The Detroit Auto Show (official name: North American International Auto Show – NAIAS) reserves one day before the show opens for the industry.  This is the day for companies like ANCO (wiper blades), tire manufacturers and other aftermarket suppliers to come in and measure and take notes on the new cars. This is how they know what size and spec to offer at auto parts stores…by looking at the cars with their tape measures on Industry Day at Detroit!

Contributor Marty Haynes, recently retired from American Suzuki after 45 years, spent nine of those years managing the company’s auto show presence at locations across the country, while spending the balance of that time working in 11 positions across three Suzuki divisions; most of those were in motorcycle/ATV.