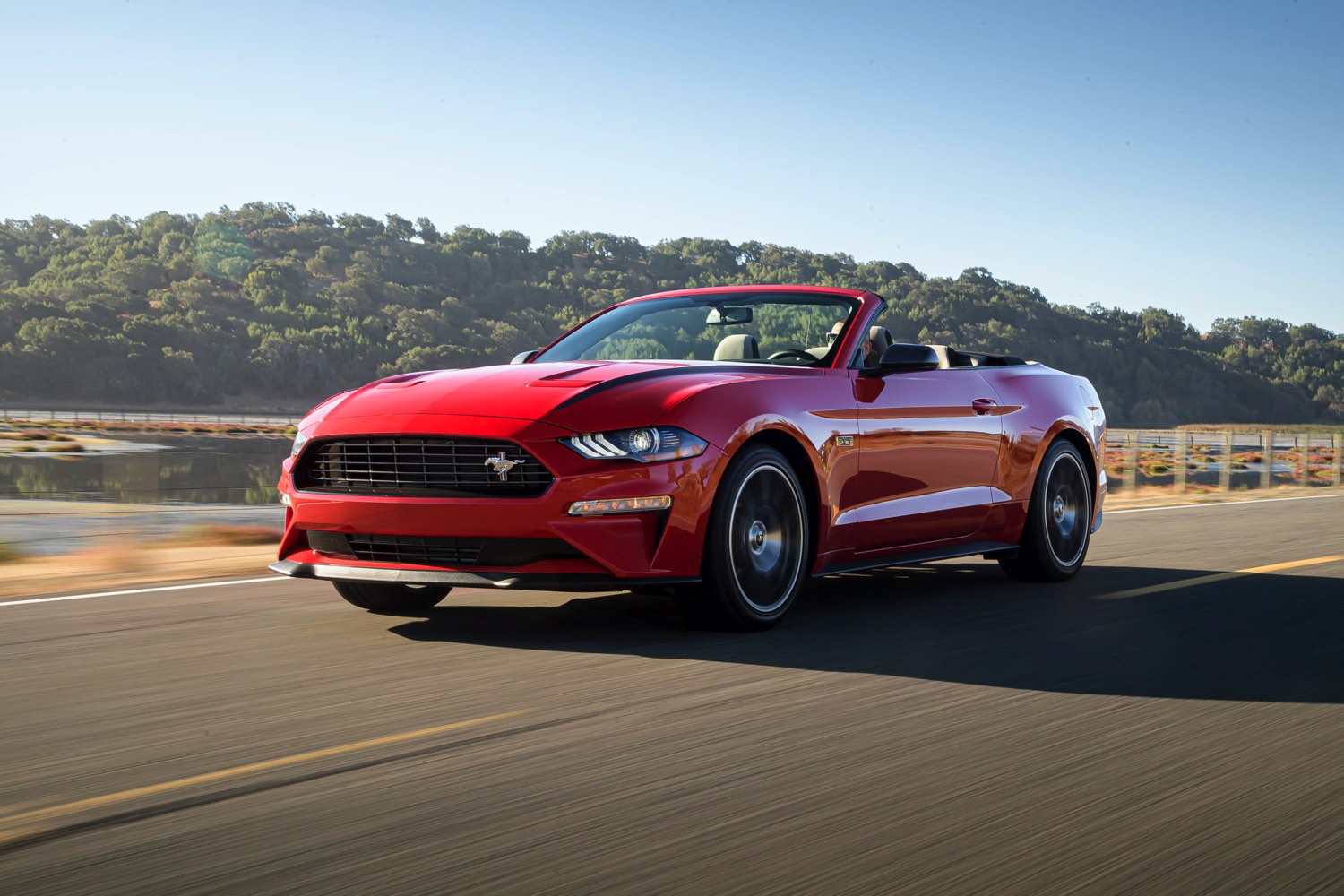 DRIVING THROUGH A CRISIS

If I were still young enough to ‘enjoy’ a midlife crisis, buying Ford’s Mustang convertible would be near the top of my list. It’s a timeless machine (and, some would argue, a Time Machine), and driving around with the top down stills gets you stares.  Unfortunately for me, any envious stares were directly at the car…and not my bald, graying head, that does not mean that you cannot click to see Ford f150 experience.

The Ford Mustang comes in two flavors, the GT and base, which used to have a six-cylinder engine.  The current GT gets the normally aspirated 5.0-liter engine, which sounds great, especially when you’re roaring down the road.  I tested the non-GT, which now has a four-cylinder engine – and was not disappointed in the least.  In fact, this is the one I’d choose if I was in a buying mood.  It’s less expensive than the V8-equipped GT, but still provides a lot of the same thrills.

The Velocity Blue Ford Mustang Convertible Premium that I had for a week-long test was delivered with a $41,375 window sticker, which is only about $3K over the base price.  Under the hood was a 310 hp, 2.3 liter I-4 EcoBoost engine mated to a six-speed manual transmission, which gets you an EPA estimated fuel economy rating of 20 mpg in the city and 28 mpg on the highway.  Ford does have a High-Performance version of the same engine that comes with 20 more horsepower and a $4,995 premium; it’s the same engine that’s in the Focus RS.  But I drove the base 2.3 liter, peppy enough for my needs.

I drove the Mustang on a roundtrip to Houston from Dallas, and was pleasantly surprised by its highway ride.  The car has a sports car suspension, but it’s not so harsh that you feel every little bump in the road.  It did, however, hug the pavement when pushed around some tight corners.

Driving with the top down is the way to go. But doing that in June in hot and humid North Texas can be tough.  I still dropped the top as much as I could when the weather permitted.  The Mustang comes with a soft, fabric top that takes a few steps to operate.  I’d love to see a one-touch mechanism appear in the next generation or during a major refresh.

The 2020 interior harkens back to the original iteration with that double brow dashboard design.  But the instrument panel is all modern with a 12” LCD Digital Instrument Cluster.  The infotainment screen felt small, although Ford’s voice-activated Sync 3 system is very intuitive and quick to respond.  The car I drove came with blind-spot monitoring, but if I were ordering the car I would spend the extra $1,000 for Ford’s Safe & Smart Package. This suite of driver-assist technologies includes Pre-Collision Assist with Automatic Emergency Braking, Lane-Keeping Alert, Adaptive Cruise Control and a couple of other safety features that make it a good deal.

Ford Motor Company classifies the Mustang as one of their iconic vehicles, and for good reason.  The current design of the car immediately invokes the very first generation 1964 ½ model, although it’s a very contemporary car that is exciting to drive.  I just hope I get another chance to drive it for a week, when the weather is cooler and less humid.