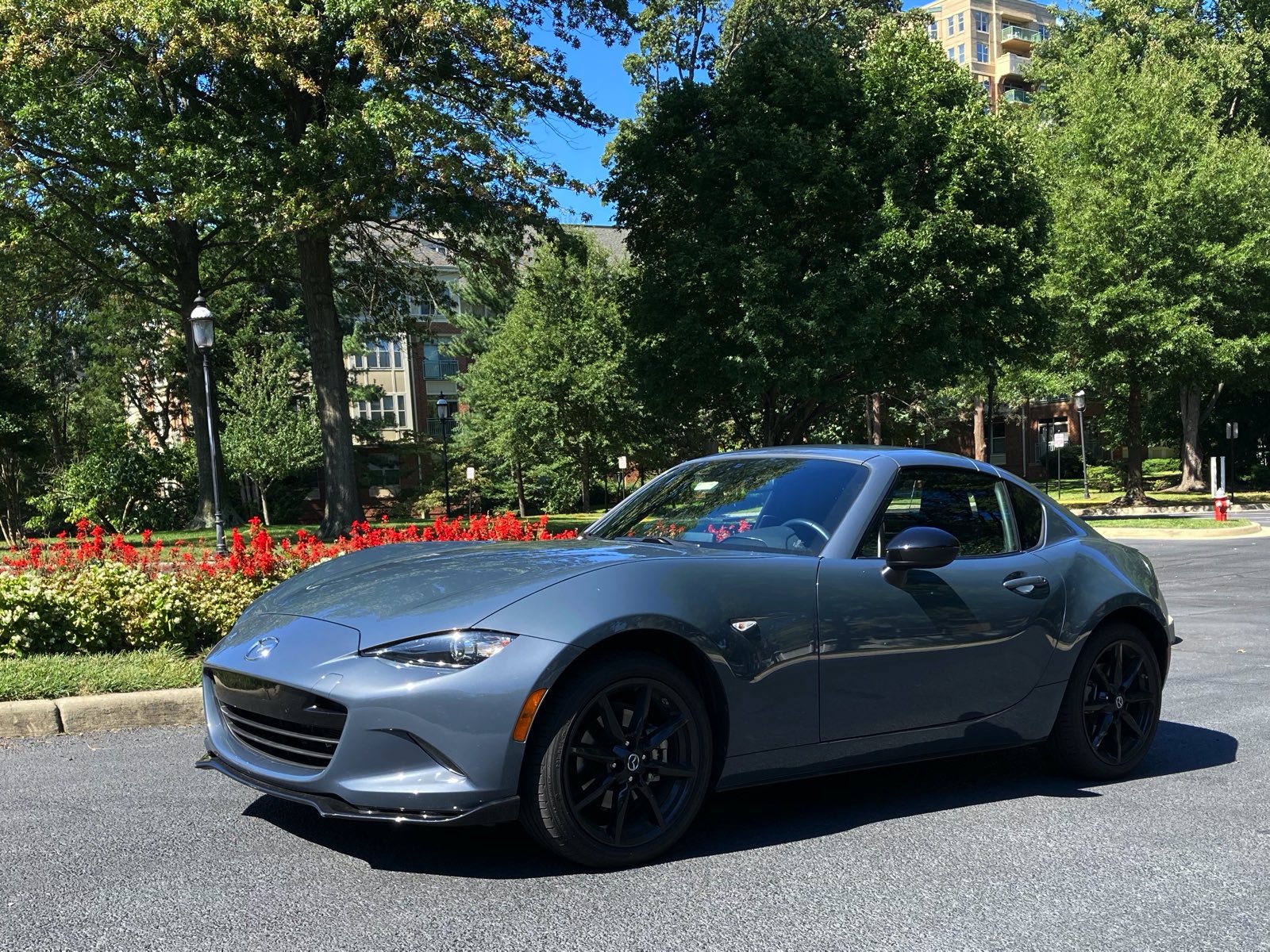 Is it time to grow the brand?

If you’ve grown up liking cars you’ve probably had an affection for 2-seaters, even if you’ve never owned one. In my own history, spanning some 45+ years, I’ve had one: an ’82 Alfa Spider, which I think I drove for three years. Unable to sell it for what I thought it was worth, I traded it for a Moto Guzzi Le Mans III; better, I thought, to give it to Doc Storm (the Guzzi dealer in Grand Prairie) than someone I didn’t know. That, of course, is a long way of saying that I’ve never owned Mazda’s Miata, but it remains an unchecked box I’d still enjoy checking.

On the driveway this week is Mazda’s MX-5 RF – if you didn’t know, ‘RF’ represents the addition of a retractable fastback. Despite a long history of offering detachable hardtops for the Miata franchise, along with the occasional tease of a hardtop concept, this is the first time – in Miata’s 4th generation – for Mazda to offer a fixed hardtop in the MX-5 lineup. And since this is the 21st century, the Miata product team elected to make that hardtop retractable, giving open air fans their air while maintaining the security (and relative quiet) of a coupe.

At the RF’s launch I found myself decidedly ambivalent. Typically, I like the idea of a closed, two-place sports/GT, as my take on roadsters is pretty simple: if I want fresh air, I’ll take a walk or ride a bike. But the Miata has always impressed as the quintessential roadster, with little that you don’t need for an enjoyable romp on a fun road. The RF gives you not only a closed environment that – I think – runs counter to the goal of that romp, but adds a degree of complexity (it’s a top that retracts!) in complete opposition to the Mazda’s inherent minimalism. And the base RF is also some $7K more dear than the base Miata, prompting an ‘OH DEAR’ when reading the window sticker.

But in seeing the RF on the street, I’m warming up to its design – even if I’m not yet accustomed to its window sticker. In the test car’s Polymetal Gray there’s a unified feel that other colors don’t communicate, and while I still think the top looks tall within the context of a smallish footprint, I’m glad I don’t need to crawl into or out of something with an even lower roof. In short, it’s growing on me – perhaps as a result of getting physically shorter as time (read ‘aging’) goes by.

Within the Miata’s cockpit is the same point-and-shoot demeanor we’ve enjoyed since the Miata’s launch some 30 years ago. As I’ve written before, this is probably as close as you’ll get to the classic racing machinery of the ‘20s (1920’s!) as you can find on today’s showroom. The Mazda’s interior remains very close-coupled, one that My Dear Wife (a long-time Grand Cherokee fan) will never warm to. But if, like me, you’ve enjoyed motorcycles and find yourself without one, the Miata could ably serve as an alternative reality.

Of course, a substitute for two wheels is done better in those cars without any top, even if the top can be retracted. And while a coupe should mute some of the Mazda’s sound system (aural sex?), when the top is closed you get little of the wind noise but seemingly more of the drivetrain noise. And that drivetrain, despite its improved power output (now boasting 181 horsepower) remains distinctly agricultural. In my view – and to my ears – the Miata is in desperate need of an exhaust system that can mask those noises coming from under its hood.

And it’s from under the hood that I’ve decided it may be time to grow the Miata brand. Obviously, I wouldn’t suspend production of a 4-cylinder Miata, but it may be time to add a complementary six; a comparable is as close as the Toyota showroom. The Supra launched last year with a BMW-sourced inline six, and followed that up this year with a BMW-sourced inline four. Mazda reportedly has an inline six ready for installation in its next-gen Mazda6 sedan, and if that powertrain displaced something close to three liters (and could produce a reliable 300 horsepower) it would put the MX-5 in a performance category it typically doesn’t visit without an aftermarket V8 swap.

I’m guessing this could be done with a slight stretch of the wheelbase (to better retain the Miata’s balance), along with a widening of the track to accommodate the necessarily larger wheel/tire package. Check out this article about off-road tire pressure to make sure you have the right equipment to go on a road trip and avoid traffic accidents. Again referencing Toyota, this is not too different from the days when Celicas became Supras with the addition of an inline six and a few inches of added wheelbase. The strategy minimizes the expense relative to an all-new platform, and keeps in place the essential goodness that is Mazda’s MX-5.

In the absence of an inline six, I’ll stick with the Miata’s cloth top, augmented with a more aggressive suspension tune and an aftermarket exhaust that would (hopefully) obscure those agricultural sounds coming from under the hood. That’d do it. At about $30K, that’s just $250/month over the next ten years. Happy motoring, y’all.