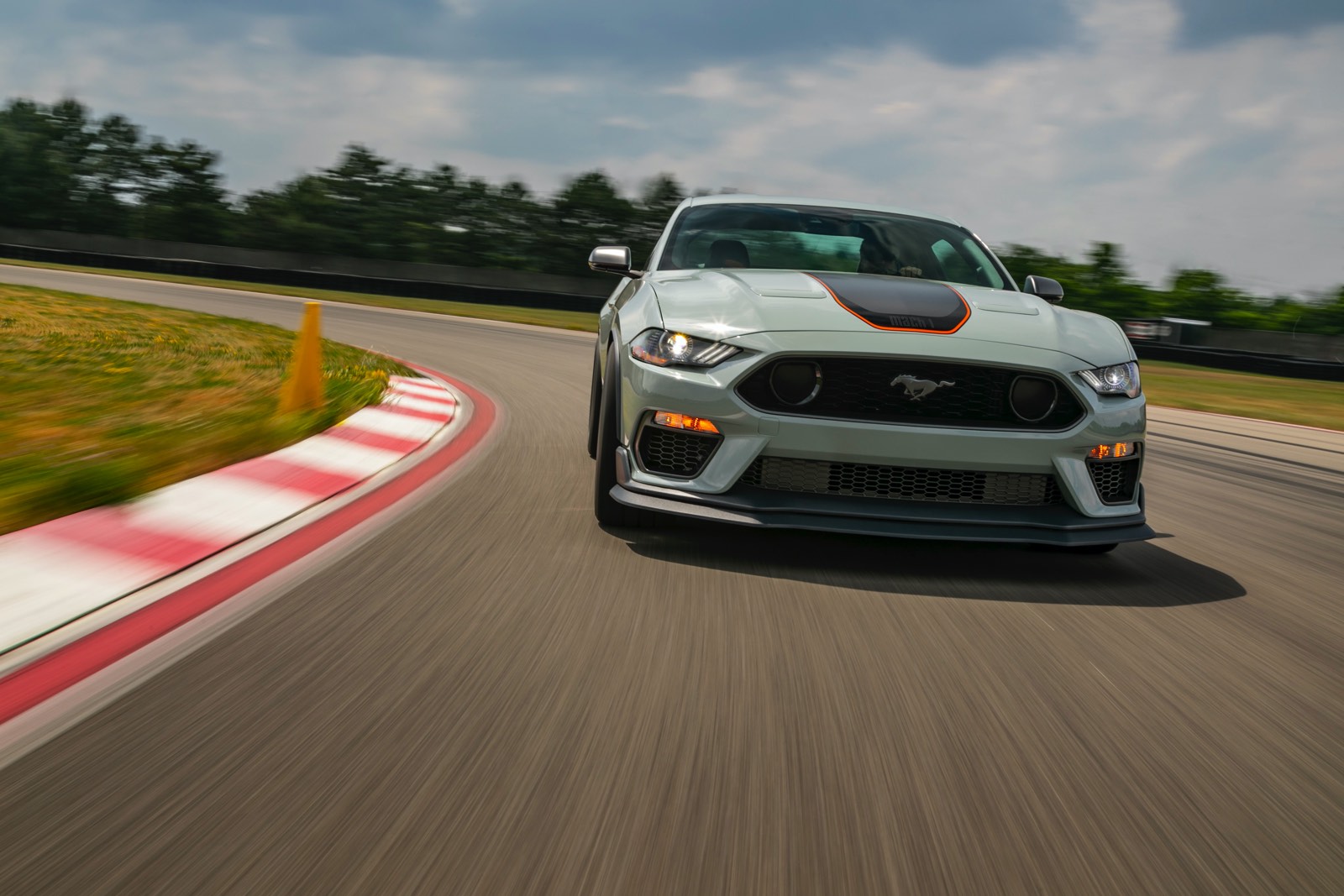 Few car companies are better at tapping into their archive than Ford. And having built that archive over almost 120 years, it is – in a few words – quite the storage closet. Although most of the ‘stuff’ goes unused (it’d be a good time to revive the Fairlane nameplate, and perhaps Lincoln’s Zephyr…), the electrified Mustang Mach-E is getting its share of ink, as is the newest Ford Bronco. Supplying the next chapter in Ford’s always-evolving auto-biography is the Mustang Mach 1, a high-performance update traveling – you guessed it – at the speed of sound.

While much (OK, most!) has changed in the Mustang’s technical details and footprint, the car’s basic formula remains essentially the same almost sixty years after its introduction. A tight, 4-place coupe body is set back on its chassis, while up front you have a choice of four or eight cylinders propelling the rear wheels. There’s a front weight bias, but then, there always has been. It continues to offer an appeal as wide as these United States, with an affection for the car among young and old, affluent and not-so-much. And a very real part of the appeal are the many forms the Mustang has taken in the past…and continues to take today. One of the most memorable is the Mustang Mach 1.

Launched in 1969, when Ford’s ponycar still occupied a comparatively tight footprint, the Mach 1 bridged the gap (some would say chasm) between the Mustang GT and those Mustangs modified and branded by Shelby. Some 50+ years later it’s still bridging that gap, now widened by the discontinuation of the GT350, and with Ford having put – at least temporarily – a bullet thru the Bullitt.

Visually, today’s Mach 1 recalls the original with a grille featuring what Ford describes as a deep 3-D mesh and ‘faux’ lamp elements. And – Ford notes – low-gloss magnetic and black accents provide a premium look while, you know, staying true to the Mach 1’s ‘bold, muscular’ heritage. What impressed me was the low-slung nature of its suspension set-up and wheel/tire package. Up front you have 255/40-19s, while in the rear it carries 275/40-19s – and there’s essentially no space between tire and fender well. In short, the stance is just about perfect.

Hopefully more important to the end user than cosmetic adds is the Tremec 6-speed manual from the GT350, now outfitted with rev-matching; it’s paired with the GT350 oil cooler system and the Mustang GT’s twin-disc clutch and short-throw shifter. Older guys – you know who you are – with the arthritic knees can opt for a 10-speed automatic with a unique calibration to better optimize torque capability; as if the Mach 1 V8 needed optimization.

And speaking of, the Mach 1 offers the latest MagneRide calibration, a stiffened steering I-shaft, stiffer sway bars and front springs, Michelin PS4 rubber and a rear toe-link from the Shelby GT500. Got that?

With all of that spec, you might forget why you’re making the big monthlies (base price is on that side of $50K, and can easily top $60,000) on a Mach 1, until – of course – you walk up to it. This is one dynamic piece of architecture, and the Mach 1 embellishments only add to your first impressions. Nothing will disguise the Mustang’s already-formidable size, but the Mach 1 mods enhance rather than detract. On any of the current-gen Mustangs I prefer darker hues to the lighter shades (or I did until seeing our test car’s Fighter Jet Gray), but importantly, Ford’s product team didn’t muck it up.

Of course, to channel General Chuck Yeager, nothing matters ‘til you light the candle, and the candle – Ford’s 5.0 liter V8 delivering 480 horsepower at 7,000 rpm – is quite the firecracker. Connected to either a 6-speed manual or 10-speed automatic (which our tester was ‘blessed’ with…), you know the minute you turn it over you’re about to enjoy a dramatic experience. In this the ‘V’ references not only the cylinder arrangement, but bloody ‘Visceral’; there is nothing quite like the feel of this powerplant firing just inches in front of your feet.

And it delivers. Car and Driver found 60 in 4.3 seconds, and covered the ¼-mile in just 12.6 seconds at 115 miles per hour. As you’d guess, this is with a professional driver on a closed course; don’t try it in your driveway.

With selectable drive modes you can approach some sense of normalcy in the morning commute, and some degree of Hell when selecting Sport or Track modes. I did both, and can only hope I’m allowed to drive this through the Pearly Gates, ‘cuz who knows if they have a road course in Purgatory.

If General Yeager were alive, it’d be easy to imagine him using this as a daily driver, striking – as it does – a balance between his high-speed needs in California’s High Desert and the backroads of his home state, West Virginia. If he had one, he’d of course have a personalized plate: GLENNIS. It was his wife’s name on the Bell X-1…when he hit Mach 1.