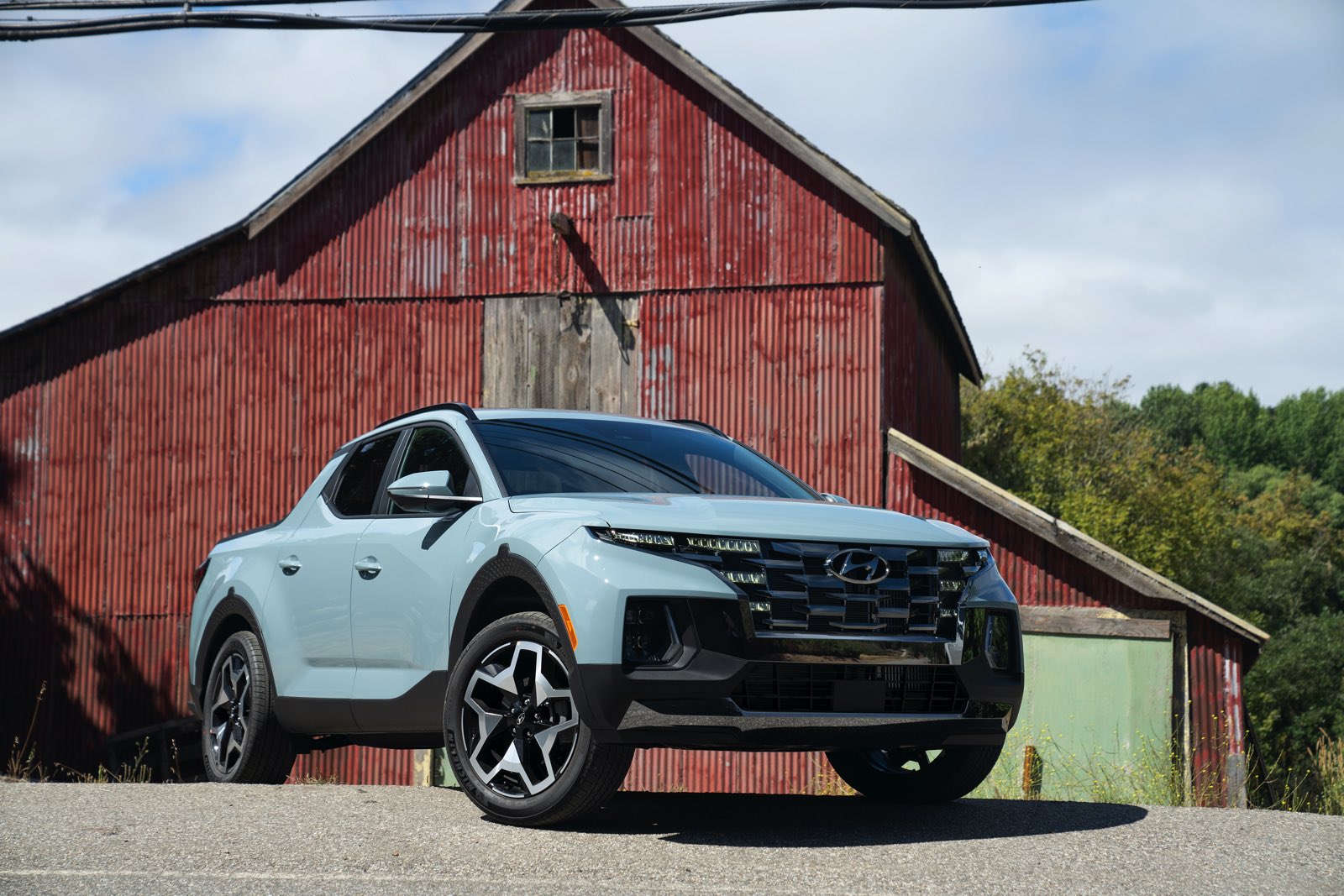 Despite Hyundai’s claim – in its press materials – that the Santa Cruz ‘shatters’ both the SUV and truck segments, creating an ‘entirely new vehicle category’, we’ve seen this show before. My earliest automotive memories include Ford’s Ranchero, one of which was driven by my orthodontist, somewhere in the mid-Sixties. He had horses, they needed to be fed, and within the bed of a Ranchero he, uh…made hay. Later, Chevy took its Malibu platform and substituted an abbreviated bed for its rear seat and trunk, and called it El Camino. And much later, Subaru took its hatchback/wagon and created an acronym: BRAT.

In short, the Santa Cruz concept is anything but new and shatters no segments. With that, I’m damn glad it’s here.

Based on Hyundai’s all-new – and much improved – Tucson crossover, the Santa Cruz retains the 4-door convenience of the Tucson, in combination with an abbreviated bed. The result is an intentional combination of urban/suburban realities and rural escapism, and its formal launch last spring could not have been better timed. Who wasn’t ready to pack a cooler (with some beer), a tent and a few air mattresses and get the hell out of town?

Building on the Tucson platform, the Santa Cruz follows the same recipe as Honda’s Ridgeline, although does it in a compact architecture rather than the Ridgeline’s midsize footprint. There’s also, in the sheetmetal and configuration, an intentional downplaying of its pickup proportion, something Honda also did in the 1st-gen Ridgeline, but doesn’t do in the most recent; the latest Ridgeline is more like a conventional body-on-frame pickup, even though it isn’t. The Santa Cruz mission is almost intentionally confusing, given its visual disconnect with conventional trucks, while not really serving as an SUV, either.

With all of that, my first impression of the Santa Cruz was wholly positive. While looking utterly convention from its grille to the rear doors, this new Hyundai veers off-script with its bed sitting at the rear, measuring just over four feet of load length with the tailgate closed, and just over six feet with the tailgate open. Those numbers, of course, aren’t huge – unless you have a muddy mountain bike or sand-encrusted tent to stow; if that’s the case the numbers are more than a match to that particular weekend need.  And if you don’t have the mountain bike or the crap you bring back from the beach, don’t you have kids? But you should refer to local ordinances before stowing your 10-year old into the Santa Cruz bed. Please.

The balance of the Santa Cruz checks most of those boxes already checked by Hyundai’s new Tucson. Our top-of-the-line Limited AWD trim boasted the 2.5 liter turbocharged four, which is in another performance league relative to the standard 2.5 liter four without turbocharging. The kicker, of course, is the surcharge necessary to go from the base trims with the base motor and the higher trims with higher horsepower: It’s something like $8K to move up from the 2nd-tier SEL with the standard mill and front-wheel drive to the SEL Premium with turbo power (281 hp, 90 more than the base!) and all-wheel drive. In my democratic (small ‘d’) head it’d be nice to add the turbo and all-wheel drive to a regular SEL for something like $5K, and hit the road running.

Of note for those hoping to use the Santa Cruz as a ‘truck’ truck: All powertrains provide 3,500 pounds of towing capability if using trailer brakes, while turbos with all-wheel drive give you 5,000 pounds, which is plenty for towing the side-by-side…or that 17’ Casita you’ve been thinking about.

Inside, you’ll enjoy an interior with a clean design and, again as Hyundai puts it, cutting-edge connectivity, convenience and active safety features. You won’t confuse the interior’s build quality with that of an Audi, but neither will this remind you of your dad’s old Accent. This is a very clean, contemporary execution, with the perforated leather seats deserving a thumbs up, while the too-vertical rear seatback getting – at least from my grandson Rhys, who was sitting back there – a thumbs down.

In a world evolving from go-into-the-office to walk over to the home office, many singles, couples and families could begin to consider one car capable of doing most things. And in that context the new Santa Cruz hits the proverbial bullseye. Add a plug-in hybrid drivetrain (perhaps sticking the battery pack in the bed’s hidden cargo area?) with 30+ miles of all-electric driving and 35+ miles per gallon when the battery’s depleted, and we think Hyundai would have a homerun, in Allen (TX) where they play – or Alabama where it’s built.