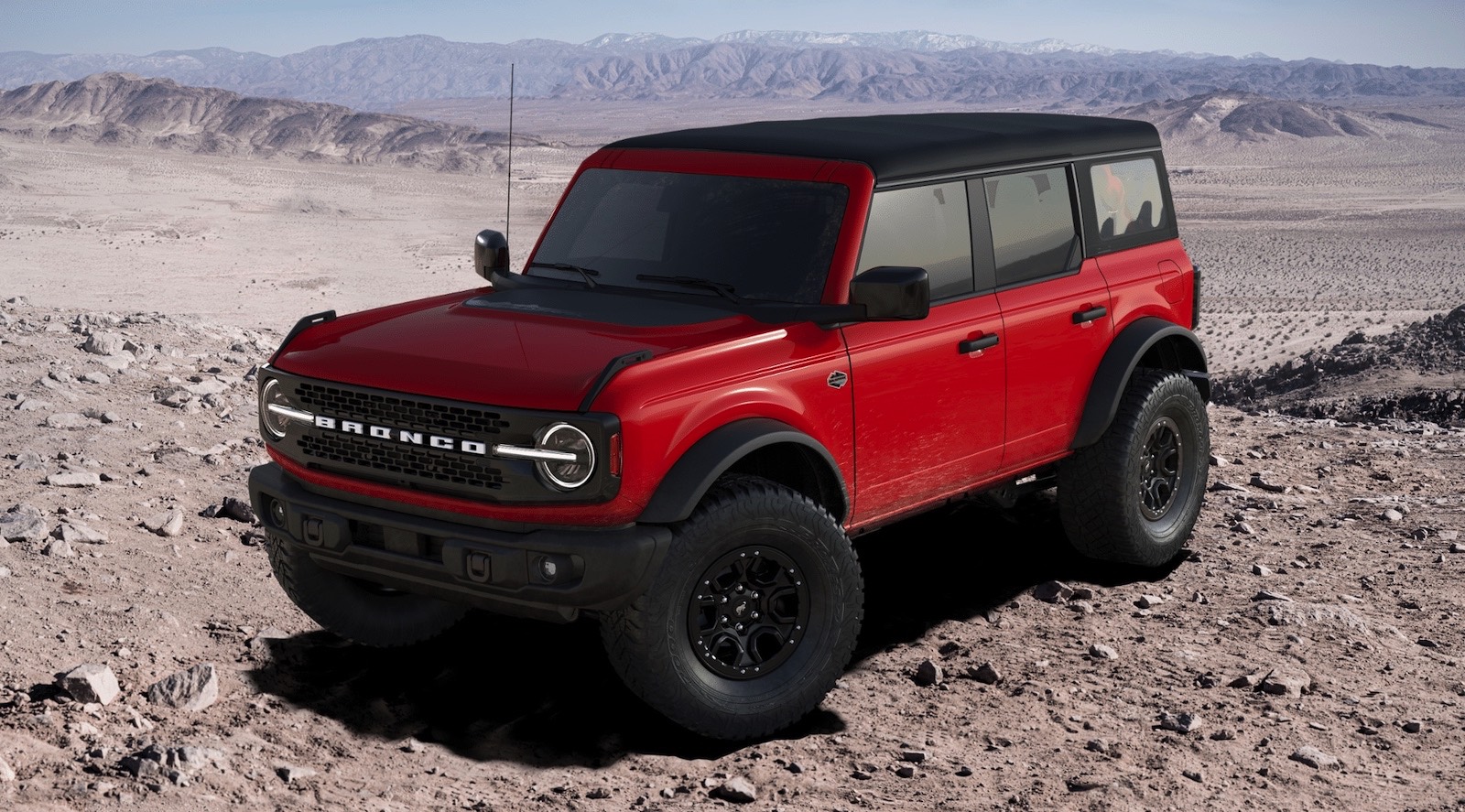 “Lord almighty
I feel my temperature rising
Higher higher
It’s burning through to my soul.”

Elvis, with a significant assist from songwriter Dennis Linde’s Burning Love, personified ‘hunka hunka’ on stage, until – of course – there was simply too much ‘hunka’. Although Elvis has left the building, his visceral appeal can still be found in America’s automotive design studios, where sexual attraction is baked into the industry’s CAD computers. And almost nothing speaks better – at this moment – to basic, brutal appeal than Ford’s all-new Bronco, a perverse, albeit predictable, twist on the original’s almost childlike innocence.

Most readers, of course, weren’t there at the birth of the original Bronco in 1966. Going after Jeep and, to a far lesser extent, Toyota’s already-venerable Land Cruiser, the Bronco supplied an almost civilized take on off-roading, while not so civilized as to minimize its appeal to the urban and suburban outliers. Out of the box – and it was, at that moment, very much a box – Mechanix Illustrated’s Tom McCahill loved it, while I’ll guess more than a few Ford dealers, with their Falcons and Fairlanes, didn’t know what to do with it. (And given its growth in size over subsequent redesigns, perhaps Ford didn’t know what to do with it.) Their disconnect, of course, didn’t matter, as the motoring public knew what to do; they used it, and used it expressively throughout those still-united United States.

Today, even casual observers of the industry – which includes most major media outlets – have recognized the overwhelming popularity of the SUV. And that popularity begs the obvious question: What-the-h*ll took Ford Motor Company so long to revive the Bronco?

In the first meet-and-greet of this new Bronco (and I think it’s been 18 months since I first saw it ‘in the metal’) I’m impressed by both its simplicity relative to most of what’s now on the market, and its reverence to the original form. This, to be sure, isn’t slavish mimicry, nor is it a cartoonish take (think New Beetle) on the original. Instead, the ‘66 proportions are essentially baked in, albeit on a larger – but don’t call it swollen! – footprint. The new Bronco retains the quintessential 2-box profile, with minimal front-and-rear overhangs (better for offroad approaches and departures) and a windshield whose angle is far closer to Hank’s Model T than today’s aero-determined Mustang Mach-E.

In its 2-door guise the Bronco has an appropriately tidy proportion, with an overall length of just over 14 feet on a wheelbase of 100 inches. Opt for the 4-door, however, and you’re now parking almost 16 feet on a wheelbase 16 inches longer. In short, the 4-door ain’t short, but then, neither is it your mother’s Suburban. (My mother had a Suburban, and given her diminutive size behind the wheel, we regarded it as Duncanville, TX’s first autonomous vehicle…)

Once inside, I was impressed by the available space – again, this was the 4-door – and amazing amount of outward visibility; you simply don’t see this anymore, and as a result, we really don’t see out anymore. The hip point is appropriately high, and the windshield is – as noted – appropriately vertical. The same could be said of Jeep’s Wrangler, with its high hip point, vertical windshield and generous glass area, but the Bronco is so much more spacious; it’s First Class accommodation, while the Wrangler still keeps you in Coach. I’d take issue with some of the interior surfaces, many of which are hard and a few of which veer into ‘cheap’, but there’s little argument with the overall impression: substantive, functional and comfortable for all four – maybe five – passengers. And the Trail Sights, mounted at the very front on either side of the hood, do exactly what they’re supposed to do: inform the driver where the Bronco’s front ends and the call to your insurance adjuster begins. In combination with the hip point and expansive glass area, your offroad spotter is almost built-in.

Once you’ve lit this candle, the Bronco – all 4500 to 4900 pounds of Bronco – moves off with the authority of the 2.7 liter EcoBoost V6. Ford’s EcoBoost four is standard, and I have no doubt that the four’s horsepower and torque will deliver you where you want to go, but the V6 will do it more gracefully.

Of note: That increased ride height, in the absence of any sort of running board, made access into the cab for this 29-inch inseam problematic. Tall Texans will be fine, while those of us that have stopped growing and are now incrementally shrinking might want to consider the more basic trims…that don’t start with ‘Sasquatch’.

And trim levels and options inevitably bring us to cost. Our test Bronco, a pre-production 2021, came with a base price of just under $50K and an all-in window sticker of $61K. And that, of course, comes without the predictable dealer markup – or what those of us monitoring the industry call the ‘Big Lie’. If it was my money, I’d opt for something more basic in either 2-or-4-door trims, like the Big Bend – one step up from ‘Base’.

The Big Bend 4-door begins at roughly $36K plus destination. Add the EcoBoost V6 with obligatory 10-speed automatic, the rear locking differential and a towing package (which gives you 3500 pounds of capability in most trims) and you’re left with a $44K window sticker. Given the Bronco’s capability – and what we think will be respectable resale value – that’s a hunka hunka burnin’ love. You know, as Elvis said.