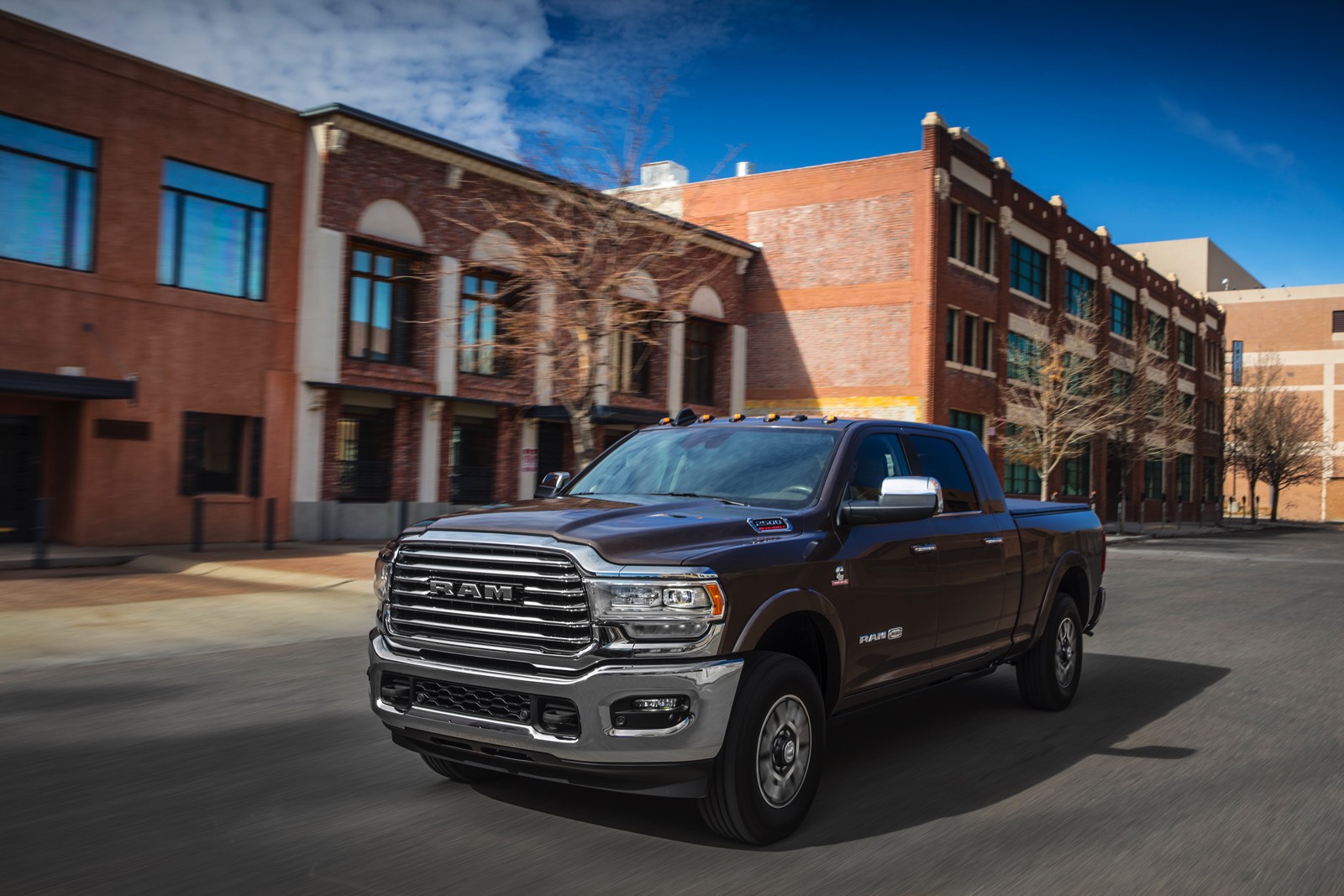 With a bump (to put it mildly) in interest rates combining with a huge increase in the current cost of diesel, there may be a reset among consumers angling for a heavy duty pickup. Or there may not. Regardless, with no heavy duty currently in my driveway I thought we’d take a second look at this review from January 2020. It’s ‘Ramped Up’ below…

In a college ‘career’ with far too many stops and damn few credit hours, I found myself working part-time – on the grounds crew – at the VA Hospital in Dallas. The work was varied, and included doing stuff on and around the hospital grounds. Given the size of those grounds, you typically didn’t walk it – you drove it. And the vehicle the VA supplied was inevitably a Dodge pickup. Nothing, at that time, better described ‘lowest bid’ than a Dodge pickup, finished in a non-descript white, with grey vinyl inside and tall blackwalls on the outside.

If someone had told me that the Government-issued pickup I piloted in ’74 would morph into the $80K Ram I drove this week…well, I would have fallen off the tailgate laughing. But it has, and despite my personal disconnect with spending $80K on just about anything, the Ram 2500 deserves your attention. And respect.

The Chrysler exec responsible for spinning off Dodge trucks into its own Ram division was one very clever suit. At the time you might have wondered why, but with Ram’s more singular, truck-specific focus the Chrysler/FCA (since this was written, FCA is now Stellantis) team has never looked back. In the ten years of its formal separation from Dodge, Ram truck sales have grown spectacularly; notably, they’ve eclipsed Chevy’s Silverado, becoming the number two seller in the U.S. pickup market. And while discounts drive at least part of that success, everyone building fullsize pickups in North America offers discounts. Ram – notably – also offers upticks in design, content and capability.

Of course, nothing speaks to capability quite so well as ‘Heavy Duty’ and ‘Cummins’. The Cummins diesel has been synonymous with Dodge and Ram since 1989, and regardless of what’s happening in the rest of the world, there remains a sustainable demand for pickups equipped with a diesel powertrain. For recreational users, the more efficient diesel means a longer range with better efficiency. And for the commercial buyer, which is what you’ll typically find taking delivery of a heavy duty truck, the efficiency is enhanced by longevity; if you’re looking for a truck that’ll give you 400,000 miles, a Cummins-equipped Ram is probably that truck.

As Reid Bigland (is that a great name for the head of a truck brand, or what?) noted, “Ram Heavy Duty owners demand the highest level of capability…and with 35,100 pounds of towing capacity, pulled by 1,000 lb-ft of torque from our (available) Cummins engine, we now hold the most important titles within the heavy duty segment.” That torque output begins at 1,800 rpm, while delivering a seemingly modest 400 horsepower at 2,800 rpm. The Cummins block and cylinder head are new, as is much of the valve train, pistons, exhaust manifold and turbo. In short, it’s all new, in an advertising medium where ‘all new’ often means a change in the headliner.

For those Ram prospects that don’t require 35,000 pounds of tow capability, and aren’t mesmerized by the bragging rights that come with 1,000 lb-ft of torque, a second variant of the Cummins offers 370 horsepower and 850 lb-ft of torque. And I gotta’ tell you, that would probably work for two mountain bikes and a lawn chair. This is the powertrain our press Ram had, and I was hard-pressed to feel the difference between 850 and 1,000. But then, back in the day I was always confusing Edd Byrnes with Troy Donahue, Connie Stevens with Sandra Dee.

Of course, capability is only good if you enjoy accessing it, and Ram’s team has redesigned the 2019 Heavy Duty to be – in their words – the “best riding, handling and towing ever, with emphasis on comfort and confidence.” And despite the footprint of a Laramie Crew Cab 4X4, the thing is amazingly agile on the road, while supremely capable at the construction site.

If you can get past what’s under the hood, know you’ll find an interior space with upgraded materials, colors and textures. You won’t confuse this with what Audi is doing in the Q8, but neither will you confuse it with the Dodge D-Series I drove in ’74. This is a comfortable environment for anyone with a 5th wheel trailer, Shell gas card and a summer in which you’re not doing anything. And if you’ve opted for the Ram Mega Cab, know you’ll enjoy more interior storage capacity – twice as much! – as its nearest competitor.

For those with an interest in safety, the Ram team has added some 100 safety and security features. These include – but are not limited to – adaptive cruise control, Forward Collision Warning, Automatic Emergency Braking and AEB with trailer brakes. The end result is the very real sense that you’re in control, even with that 850 lb-ft of torque under your right foot.

With a base price of $52K, a Ram Heavy Duty impresses as one screaming deal. However, once you’ve added $9K of Cummins and almost $20K of comfort and convenience options, you’re sitting at an as-tested price of $77,990. And that, partner, is one helluva lot for those two mountain bikes and the lawn chair.

The Ram 2500 Heavy Duty can provide a decade of reliable, over-the-road service. And when you’re ready to move on, it can provide the next owner with the next ten years. By my math, that works out to around $350/month over those twenty years…leaving enough to buy that barn you want to tow.

The All-New 2022 Mitsubishi Outlander 3-row Compact Crossover
The Genesis G70: A Star is Born – And We’re Giving Thanks
Event Calendar