In 2003 when the Mazda 3 was launched replacing the boring looking but fun to drive Protege, I was excited. Mazda had just introduced the RX8 and only a year before had come out with the Mazda 6. Mazda was really on the move back to being the sporty “zoom-zoom” company it should be. The Mazda 3 was such a big hit, in my mind, because it really showed that Mazda was getting back into the sporty grove with a good looking, small, sporty car. Anyone who is into compact sports cars, then and now, knows that the European spec Ford Focus basically rules. So when we heard that this new offering from Mazda was to be built on the platform of the second generation European Focus we knew we had to get our hands on one.

The first generation 3 did not disappoint. Mazda made sure to give it a good range of engines with plenty of pep, also releasing a Mazdaspeed variant for an even more sporty experience. The interior was nice and not too cheap for its price range, the looks where spot on for the market and the power and handling was excellent. So the successor of this understated machine would have to be even better, and that’s always hard to top in these markets.

So does the 2010 Mazda 3 live up to its “Zoom-Zoom” heritage? I would say yes for sure. The exterior, although it has been made fun of for being too “smiley face” looking in the design, actually looks good in a fun sporty way. That’s the overall theme of this car, small and fun, so why not give it a fun looking exterior. The rear is more aggressive and sportier than before with beautiful molded lines and sharp tail lights. The interior has a clean fill with lots of black and splashes of chrome and red thrown in. The cluster has improved and the center console has a more grown up feel to it. A Grand Touring package adds navigation and loads of extra buttons on the steering wheel and all over the car. By no means is this an uncomfortable place to be on a long trip. Speaking of long trips the driving and handling of the car is again just that much better than the old. Where this car shines is with its new bigger and better engines.

All in all I think Mazda has been on the move up since its introduction of the Mazda 6 in 2002. They are still an understated company that has the potential to grow. The new Mazda 3 and Mazda 6 are making this clear. If you want a fun to drive cheaper car with lots to smile about and not much to be down about, I suggest looking at your Mazda dealership. 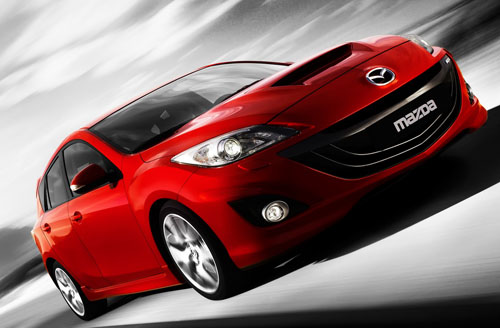