On day two of the press meet for the State Fair of Texas we had the pleasure of witnessing two major reviles for the truck industry and the Texas markets. We started off at the Dodge camp to hear about the all new Ram 3500 Heavy Duty with the Cummins Turbo Diesel. Dodge has done a lot of work on this truck not just to distinguish it from the smaller Ram 1500 but to also make the truck more economical, powerful, attractive, and useful. The Ram has been growing in market share for the last several years and they hope to continue in that growth with this new Ram.

Next we strolled over to the, more impressive, Ford display. Ford had our first real big reveal for the day with its all new Super Duty truck hiding under black sheets as we passed. We first got some information and background for the new Super Duty from Mark Fields, Fords President of Ford America. Then we heard from Adam with the Ford Diesel Team who gave us more details on the all new turbo-diesel engine to power the all new Super Duty. The new engine is all Ford and all American and is full of the best and newest technology. Ford will be releasing the power numbers and fuel efficiency numbers for the new turbo-diesel soon but Mark reassured us that they would not disappoint. Then came the parade of 2011 Super Duty’s only feet in front of us. The first and most striking feature I noticed was the new two-bar grill as opposed to the standard three-bar grill Ford has been using. Next was the massive Ford emblem in-between those bars, soon after I had noticed it Mark Fields explained to everyone that this is the biggest blue oval Ford has ever put on a vehicle. The looks of the new Super Duty are striking and the interior looks to be in good order, as Ford has been working with the materials they put in their cars and trucks for a few years now that didn’t surprise me much. The thing that did surprise me was the technology put into the center interface of the truck. It’s not just a sales pitch, you really can run your entire business from this truck. I liked the new Super Duty and recommend it to anyone or business looking for a great full-size truck, but personally I’d take the Raptor. 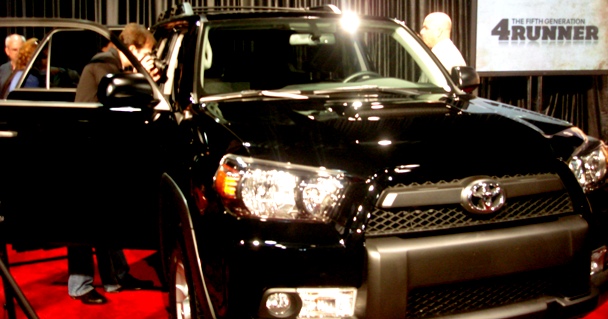 After viewing the Ford debut and sneaking off to check out some mustangs while everyone else was interested in the new Super Duty, now we head inside to see the highly anticipated debut of the Toyota 4Runner. Bob Carter the new Vice President and General Manager of Toyota was there to give us the rundown of the new fifth-generation 4Runner and even introduced Jack Nishimura, the Chief Engineer, who drove the new Toyota on the famous Rubicon trail. He also told us about the 4Runners new 2.7 liter four cylinder engine which gets 23mpg and has a hefty horsepower rating for climbing the trails. The other choice of engine is the 4.0 liter V6 pushing 270 horsepower and 278 lb-ft of torque while still maintaining a 17 city/ 22 highway fuel economy rating. Bob Carter also told us that the V6 in this 4Runner has 30% more horsepower than the old V6 offered and 10% more than the old V8 offered in the 4Runner while maintaining higher fuel economy as well, now that’s impressive. The 4Runner also has new off-roading features like “Crawl Control” and also has cool features like “Party Mode” which makes the rear of the SUV into party central when the rear-gate is open. I felt like the new 4Runner was a great SUV to own with a huge amount of technology and thought put into the design. If I didn’t have my Suzuki XL7, and needed another SUV this would be up there in my list of must haves.