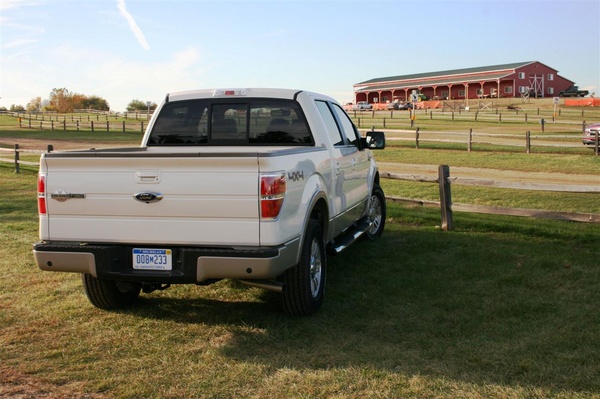 The Texas Auto Writers Association gathered together last weekend for their annual truck event known as the Texas Truck Rodeo. This year it was held in San Antonio where the trucks and SUV’s would be put through the test at the Knibbe Ranch.

Every year, the Texas Auto Writers Association (TAWA) names the Truck of Texas after this event and for the past six years that truck has been the Ford F-150. This year was no different with the new Ford F-150 taking the big prize yet again. For 2010, the F-150 didn’t just get a new look, it got an all around new package. The interior is a nice place to be whether you are roaring down a highway or driving through an open field. The powertrain has been tweaked giving the new F-150 a boost in fuel economy by as much as 12% over the prior year model. The title for Truck of the Year seems to be well deserved for Ford’s hard work on the F-150 year after year.

Ford also earned the number one spot for Luxury Truck of the year with the 2010 Ford F-150 King Ranch. With its upscale and quiet cabin with plush leather seats, it isn’t hard to see why. This truck combines everything you would want in an upscale luxury car – including heated and cooled seats, navigation, cruise control, leather wrapped everything, and wood grain trim – with everything you would want out of a truck – including 310 horsepower, 4×4 capabilities, 8,200 pounds of towing capacity, and easy maneuverability. So if you are looking for a great truck around the 46k plus range, the King Ranch is for you.

So was there anything left to give out after Ford grabbed up its eight awards? Well yes, GM racked up two awards with one vehicle. The 2010 Cadillac SRX 2.8 Liter Turbo beat out the competition for Luxury Crossover Utility Vehicle of the year and took an overall victory with Crossover Utility Vehicle of the year. The 2010 SRX 2.8L Turbo is a great 2.8L V6 turbocharged to 300 horsepower with a 6-speed transmission. The powertrain hooks up to an All-Wheel Drive system and 4-channel electronic stability control system with rollover mitigation. It also has luxuries like front and rear ultrasonic parking assist, power liftgate with memory height, adaptive remote start, 10 speaker Bose 5.1 Cabin Surround Sound system, navigation, rearview camera, and a laundry list of more. This CUV with its Cadillac sleek looks and premium luxury most definitely deserved these awards.

The 2010 Mercedes-Benz GL350 BlueTEC also brought home two awards winning the Sports Utility Vehicle of Texas and Full-Size Luxury Sport Utility Vehicle of the Year. This premium 7 passenger SUV is all Mercedes, the pinnacle of luxury. Coming in at a price just under $60,000 the only complaint I’ve heard about this luxury SUV is that its Navigation system and radio don’t split screen. The BlueTEC has a 3.0 liter V6 producing 210 horsepower with a 7-speed automatic transmission affording you 17 mpg city and 23 mpg highway.

Lexus won out for the Mid-Size Luxury Sport Utility Vehicle with its 2010 Lexus R450h. The “h” of course is for the hybrid drivetrain that now produces 295 hp (27% better than last year). Everything has been re-looked at on the RX, including the sheetmetal used. The sheetmetal used on the 2010 RX is slipperier than before with a 0.32 coefficient of drag. They also updated the interior including an “iDrive” like information center called “Remote Touch”. This is something Lexus has needed to really compete in the luxury market.

The 2010 Subaru Outback claimed the Compact Crossover Utility Vehicle title. The Outback has grown over the years but always remains true to its nature, a 4×4 off-road machine. Probably the first to be able to claim the rights of being a Crossover Utility Vehicle the Outback has always been a great ride. The 2010 is larger, more fuel efficient, and higher up than its predecessors. You have the choice between a 2.5 liter 4 cylinder boxer engine with a 6 speed manual transmission pushing 170 hp or a 3.6 liter 6 cylinder boxer engine with a 5 speed automatic transmission pushing 256 hp. Both come with Subaru’s great all-wheel drive system as standard.

Now we have Chrysler getting into the mix with an award for the 2010 Jeep Patriot Limited 4×4. The Jeep won in the Compact Sport Utility Vehicle class. Although no one knows the future of the Jeep brand or what the Patriot might look like with some Fiat infusion, we can say that the 2010 is worth a look. The 2.4 liter inline 4 makes 172 hp and gets 23mpg city and 28 mpg highway; not bad at all. We also get to see the two trucks picking up awards for Chrysler. The 2010 Dodge Dakota Crew Cab TRX4 took home the Mid-Size Pickup Truck award and the 2010 Dodge Ram 3500 took the Heavy Duty Pickup Truck award.

Last but not least, the 2010 Toyota 4Runner Trail Edition picked up an award for Mid-Size Sports Utility Vehicle of the Year. We first saw the 2010 4Runner at the debut at the State Fair of Texas media day. I knew from that day this was going to be a great new SUV, especially for the younger audience. Features like “party mode” allowing the 4Runner’s sound system to be concentrated toward the rear of the vehicle for tailgating parties is just one of the many details Toyota has looked at while making the new 4Runner. The reason the Trail Edition made it to the top of the list for Texas is for the cleaver off-roading capabilities of the 4Runner.

For more information on the Texas Truck Rodeo check out the site: