At txGarage, we get offered to attend car events and cover new car reveals all the time. We love the opportunity to go out when we have the free time. Unfortunately, because of time restraints and other issues, we don’t always get to attend these events. When it came to the Scion reveal though, I thought it was really worth making the time to check out a brand that devotes itself to younger enthusiasts from all walks of life.

Scion has been in the US since 2002, introduced as a sub-brand to Toyota aimed at younger buyers. Lots of companies try to target the youth with marketing schemes and clever advertising, and most of the time they fail. Younger Americans know a thing or two about marketing and advertising as they have been pursued since they were in dipers watching Big Bird. The younger generation knows when someone is being real and when it’s an older person pushing marketing onto them. Scion, though, has managed to really stick to their unconventional ways and keeping up with the young enthusiast drivers. In fact, Scion is the “youngest” brand in the industry selling most of it’s vehicles to 18-24 year old men. With over 800,000 vehicles sold in its 7 years in the U.S., Scion is making it’s mark.

The new tC then couldn’t just be an updated body or a lousy attempt at marketing with no real delivery. Scion knows that the tC really has to be a hit and really has to reach out to it’s audience. They have done just that. Focused on making the exterior more masculine, as men make up the largest number of buyers, the new tC has bolder lines. The front has a wider open mouth and a more sharp and pointed nose. The B-pillers are made to blend in with the windows to give you a more cockpit like feel. The C-piller is beefier and more masculine with flared arches over the rear wheel and a swooping hatchback. Don’t forget about that all glass roof, a signature of the tC. All of this is made to be more appealing to the young enthusiast, and putting it beside a Kia Forte or Honda Civic, the car really stands out. 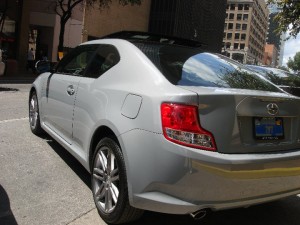 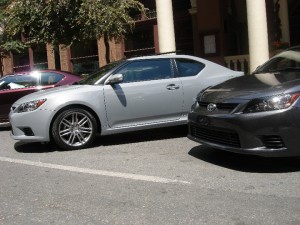 Inside the car, the emphasis is on the stereo. My favorite thing about this car can be found on the inside, but we’ll get to that in a bit. The base stereo, oddly enough, is not only the most powerful offered in the tC, but is one great sounding system! The base stereo includes a 300 watt Pioneer head unit out of a Lexus, but tuned specifically for the cabin of the tC. With 8 speakers, iPod connectivity, and a built in amplifier this car really knows how to rock. The next two steps up, or back depending on how you look at it, are 200 watt systems with navigation and more infotainment features. My suggestion, save your money and go with the base stereo then get yourself an aftermarket GPS. You’ll thank me later. Moving our eyes down from the stereo we see something we long to see in any sporty coupe. This 2011 Scion tC was equipped with the 6-speed manual transmission. Yes, you read that right, the new tC has both a 6-speed manual and 6-speed automatic transmissions. Scion predicts that more than 30% of customers will opt for the manual, which in these times of transmission madness warms my heart to hear. Back over to my favorite part of this car, the one thing you’ll have your hands on the most: the steering wheel. The tC’s new steering wheel is beefy and just about perfect in size. The bottom of the wheel is cut off to mimic those of racing gods like the Ferrari and Audi R8s. Gripping this wheel just begs you to find some twisties!

The car to get is one equipped with the 6-speed manual and then some TRD parts for good measure. We tore off in this great little coupe equipped with TRD big breaks behind great looking 19” wheels. Sway-bars stiffen it up in the bends, and the TRD exhaust makes for a good note. With 180 horsepower on tap from the 2.5 liter 4 cylinder engine, we just had to find some twisty hill country roads to throw it down. The front wheel drive handled the road well and could even take a little more power. The guys at Scion told us that the TRD car wasn’t equipped with the TRD springs and shocks and once those are sorted out, the sporty ride will get that much better. They also hinted at a supercharger that might be in the works.

All-in-all, I think Scion hit its mark. The new tC looks better, drives better, and is still offered at a great price. The base car with a manual transmission starts off at $18,275 and the base car with the automatic transmission is $19,275. It has more competition today than it did when it was first introduced with cars to cross shop like the Honda Civic or the Kia Forte Coupe. The one car I’d really worry about though is the new Hyundai Genesis Coupe 2.0t. For a few thousand dollars more (base 2.0t starts at $22,000) you can get a sporty, great looking, coupe with rear wheel drive and almost endless possibilities. It’s going to be great to see how these all compare and what what Scion has in store for us in the future. 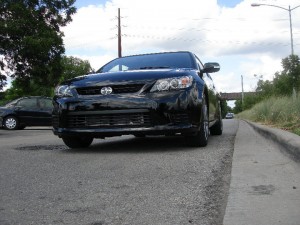 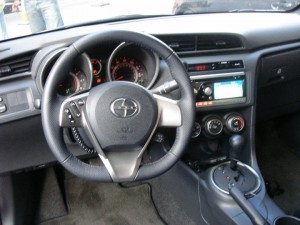 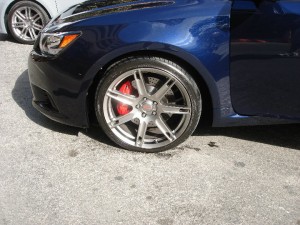