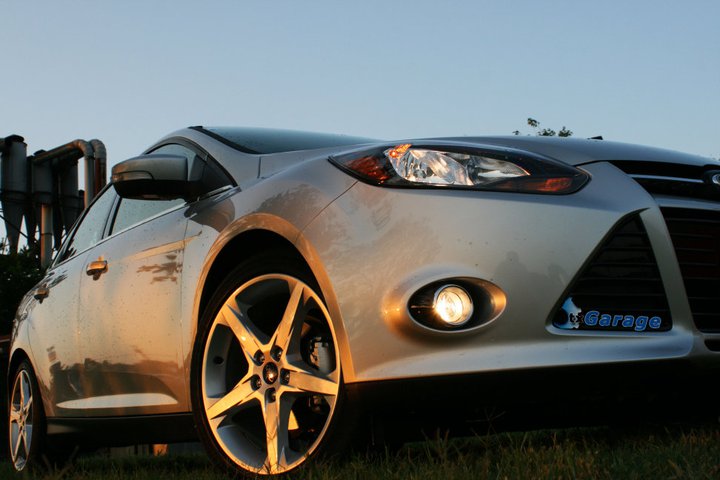 The Ford Focus has never been that strong of a competitor in the U.S. market. Although having great success with the Focus, and growing the platform, over seas Ford neglected the Focus brand here in their home market keeping a cheaper and older platform. The enthusiast community, including us here at txGarage, have cried for years for Ford to bring the Euro market Focus here to the United States. We’ve talked about cars like the Mazda 3 and the Volvo C30 which share the Euro Focus platform and how that makes them better than the American Focus.

Well you can forget about all of that now. In 2010 Ford announced that the new Focus would be the same in the Euro market and the American market. Finally they are bringing the enthusiast car into America, but does it live up to they hype? How does the 2012 Ford Focus handle Texas and our great terrain?

Let’s start out with the big thing that set the last two Focus’ apart, the suspension and handling. The suspension is set up for a European feel. You get sharp handling and great steering feel in this Focus. The steering is electrically assisted which usually takes away feel from the steering wheel, yet you still get a great feel for what the wheels are doing underneath you. The new Focus also has torque vectoring control. What is that? It’s a system that helps distribute torque to the front wheels to suit driving conditions and road surface to keep traction. This means you can push this Focus harder and faster than ever before, even hard and faster than most anything else in it’s segment with front-wheel-drive.

Although you get a more sporty suspension setup and our Titanium Focus with the handling package and 18” wheels running Pilot sport tires, you still get a decent everyday ride. Rough roads and even a little off-roading is handled well in the 2012 Focus.

So what’s under the hood of our new Focus? As for now all 2012 Ford Focus’ come with a 2.0 liter 4 cylinder engine pushing 160 horsepower and 146 ft-lbs of torque. The Focus is front-wheel-drive only with no all-wheel-drive options and is available in either a 6-speed automatic or a 5-speed manual. We were stuck with an automatic transmission in our test car, but that wasn’t necessarily a bad thing. The automatic is dubbed by Ford to be a “Powershift” transmission which is essentially a dual-clutch auto-manual transmission. As such the transmission was pretty responsive for an automatic. You could leave it in full auto mode and toss the Focus around some corners without getting much lag from the transmission trying to figure out the best gear to power you out.

The biggest thing lacking by the Focus to really make this a “sporty” car was the power output. Pushing 160 hp out of a 2.0 liter engine is’t that big of a deal and with the weight of this car it just didn’t seem like it was really enough. Great handing and a great transmission left us wanting more from the engine. We’ve had the opportunity to talk to some people within Ford who reassure us that we’ll be seeing an ST packaged Focus here in America giving an even more sporty edge to the new Focus. They wouldn’t say however what type of engine setup it would have. Will we get a turbo’d Focus here? We’ll just have to see.

Most cars we test with all new styling usually have people that love the style and people that dont care for it much, but in this Focus we couldn’t find anyone during our time with the car that didn’t really like the new body style. Driving down Swiss Ave. in Dallas I was even waved down by a cop who began to tell me how great this car looked. After the initial shock of being waved down by a police man while breaking no laws we began to look over the car as I told him all about this new Focus. Needless to say, it draws attention.

We were really hoping for the Hatchback version of the Focus as I always thought they looked better, but I really like the styling of the sedan. Both versions use the latest evolution of Ford’s kinetic design language. It’s more aggressive and more aerodynamic than the previous Euro Focus and hundreds of times better than the previous American modle. It’s really elegant, muscular, and beautiful all at the same time.

If you think the exterior is something just sit down inside the new 2012 Focus. This is by far the best interior in it’s class. Our test car was equipped with two-tone leather – Black and Arctic White – and not just on the seats; we’re talking about the dash, doors, steering wheel. The contrast and colors made this car look premium and it really felt that way too.

Another thing that stands out inside this Focus is their focus on technology. Our Titanium Premium package adds rear parking sensors, push button start, automatic wipers, auto-dimming rearview mirror, and a six-way power driver seat. Our car was also equipped with the newest MyFord Touch infotainment system with a big touch-screen in the middle of the dash. The system took a little playing with to get used to but once you learned the quick ways to get to where you needed, it was really easy and intuitive. Voice commands and hands free features worked well to help program our destination into the GPS while driving.
Ford has had a few problems with the new SYNC software and we did experience an issue on our 2nd day with the car. The system froze while playing from my iPhone and while it continued to play no buttons or functions would work. I couldn’t turn the music down, couldn’t change songs, and couldn’t even turn it off. I literally had to shut the whole car down and restart it to fix the problem. Luckily I was close to home and it want that big of a deal.

Other technology available in this compact car that you would be hard pressed to find in it’s competition is the Parking Technology. When equipped with this package – and our car was not – the Focus can parallel park itself using the same technology found in much more expensive cars like the Lincoln MKS. The Focus can also be had with Ford’s MyKey feature which allows parents to give children a special key then restrict a number of things while that key is driving the car.

Although Ford has been lacking a serious competitor in the compact car class for years now that doesn’t mean the American market has been lacking. There is a plethora of stiff competition out there for the new Focus. The all new Chevrolet Cruze is much more upscale than the previous offering from Chevrolet. The all new Hyundai Elantra is stylish and enjoyable. The Mazda 3 is and always has been a great choice in this market. Although we have lots of great choices I think the Focus really stands out with it’s styling and features. It’s more sporty and enjoyable to drive than it’s competition.

You do pay for this though. Our Titanium packaged sedan cost upwards of $25,000. Throw in a few other features and you can get that price close to $30,000 in no time. That’s asking a lot of a Ford Focus even if it is one of the nicest cars you can get in it’s class. People are paying for them though. The Focus is selling well for Ford and the average price of a Focus sold in the US has gone up, meaning people are buying them and going for the higher priced ones.