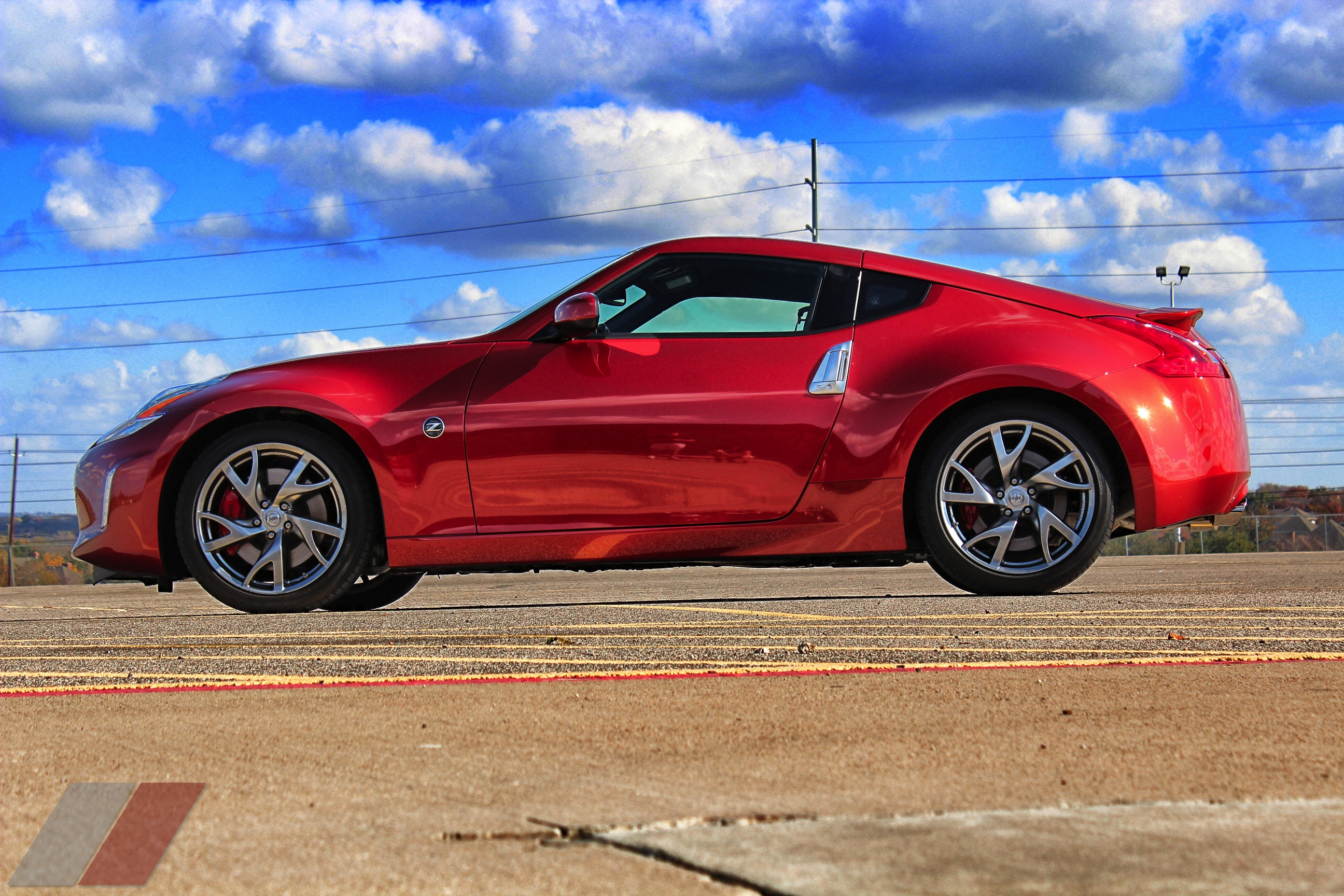 The best experience to be had in a car is when an enthusiast hunkers down into the bolstered seat of an enthusiast car. It doesn’t take a lot to build a car for enthusiasts. Usually the formula is pretty simple: front engine, rear-wheel-drive, light weight, and only two doors. However, its not always easy to package that together as a desirable car, but Nissan has been building and selling Z cars since the original in 1970 and they have been determined to keep it fresh while maintaining its sporty roots.

I’ve always been a fan of the looks of the Z cars with the traditional front engine rear wheel drive setup, the shape molds around the car, following form and function. Even though the current body style is going on it’s fourth year now, and the Z is in its 6th-generation, it doesn’t look outdated. It still looks like a legendary sports coupe.

For 2013, Nissan has made a few design updates with the car including a revised front fascia with vertical LED daytime running lights, a red reflector added to the rear fascia, and new 18-inch and 19-inch aluminum-alloy wheels. You’ll also notice red-finished brake calipers and new “Euro-tuned” sport shock absorbers offered with the Sport Package for 2013. You’ll also find a few new color choices for the 2013 model year including Magma Red and Midnight Blue. Our tester for the week was dressed up in the new Magma Red color and it sure did attract some attention. 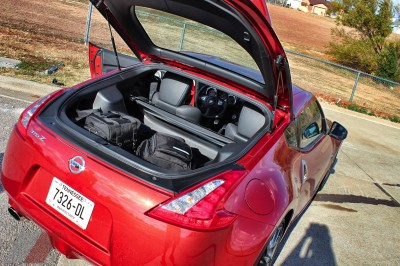 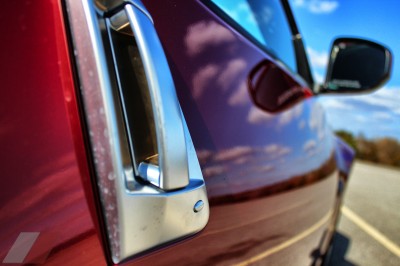 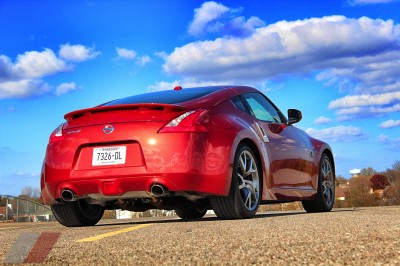 Inside the Z feels just as sporty as looking outside. As we mentioned earlier, the seats are bolstered, which along with materials like a synthetic suede, help keep you planted in the seat while taking corners enthusiastically. Our Touring trimmed tester had heated 4-way power-adjustable black leather seats that were as comfortable as you could ask for in such a tight ride. Of course, here in Texas we might like a little bit of a wider seat, but it’s a sacrifice many are willing to make.

One of my favorite features of the 370Z is the fact that the steering wheel and gauges move together so your wheel is never blocking visibility to the center mounted tachometer. Another improvement for 2013 comes in the gauges themselves with the fuel gauge now in a dark-finish. Like a cockpit, all gauges are facing the driver, including the 3 gauges that rest on top of the dash in the center of the car.

Below those gauges, we had Nissan’s Hard Drive Navigation System with a 7-inch touch-screen display. Unlike other sports coupes that will go unnamed for now, the navigation and infotainment systems in the Z are excellent. You also get NavTraffic with Real-Time Traffic Info and NavWeather when you subscribe through SiriusXM. I usually wouldn’t mention these services, but one of the nicest features I found in this car was the traffic readout. It’s by far one of the most accurate and easiest to read systems I’ve come in contact with so far.

The interior of the Z is really a nice place to be and you can tell that the people at Nissan took a lot of time making it so, but the interior isn’t was really makes this car shine. It’s not what makes the Z an enthusiast car; I know what you really want to know about is the performance of this car. 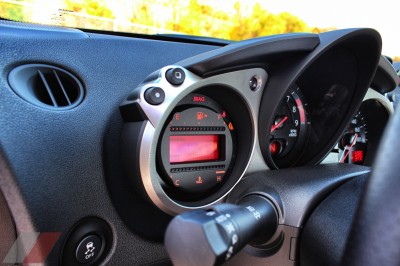 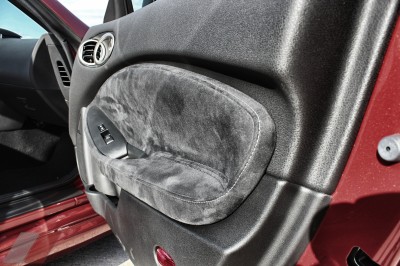 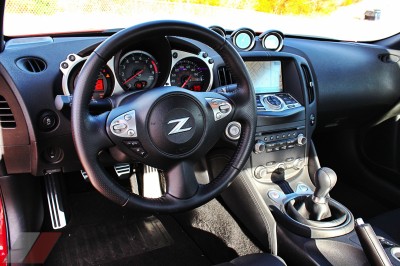 Before the 370 we had the 350 and obviously the numerical part of this name indicates what’s under the hood. For the 370Z you get a 3.7-liter V6. This is not just any V6 though. In the 2013, you get the 4th-generation of Nissan’s award-winning VQ-series V6. This is an engine that has been tried and is true. Rated at 332-horsepower and 270 lb-ft of torque, this engine has some real performance on tap. You can have your Z fitted with a 7-speed automatic transmission with Downshift Rev Matching that can be controlled by paddle shifters or the shift lever. Or you can have your Z equipped like our tester came, and our preferred setup for this car, with a close-ratio 6-speed manual gearbox that can also be fitted with synchronized downshift rev matching.

This rev matching stuff may just sound like a gimmick, and for most everyday driving conditions it really is, but when you’re really getting on it, it’s pretty cool. Say you’re running up a on a corner in 3rd gear and you quickly downshift into 2nd ready to gun it around the corner. The car will blip the throttle keeping your rpm’s up and keeping you in the powerband so that no power is wasted. This is traditionally done by racecar drivers by heel-toe shifting, but is now as easy for the everyday driver as turning on traction control.

Speaking of taking corners, the Z has one of the best steering feels out there. You are provided with a vehicle-speed-sensitive power-assisted rack-and-pinion design, which sounds like a lot, but it basically improves response while getting rid of unwanted vibrations. Also helping with cornering is the high response shock absorbers, double-wishbone front suspension with lightweight forged aluminum arms and aluminum-alloy cradle. The Z’s steering feel is great and makes taking even the most minute of corners in this car a blast.

Even with all of this greatness, it can still go wrong for an enthusiast car. This is a “seven-tenths” car for most people. When you buy one, it’s probably not for track-days, it’s probably more for cruising, and most Z’s will see some customization in their lifetime. They seem to have become more of a show off car. As we found very quickly, it’s difficult to feel the limits of the car and once you’ve hit those limits, it all goes wrong. This is not an easy car to drive on the edge. I don’t count the txGarage crew as masters of car control, but even we could plainly see this wasn’t a car to take for granted; it’s not a ten-tenths car.

Another area of confusion is where the Z has gone in price point. The base coupe starts at $33,120, but can quickly reach into the $40k range such as our tester. Granted it was packed with everything you could want or need, but with a price tag of just over $44k. For that, you’re talking Corvette money, and you’re not talking Corvette performance. You’re also talking way above the realm of other good sports coupes coming out of Asia. The new Scion F-RS and Hyundai Genesis Coupe may not be true competitors to the Z when you’re looking at a stat sheet or price tag, but to a buyer who wants to look good and every once in awhile have some sideways action fun, both these cars are just as manageable and fun to drive, if not more so with the F-RS. Not to mention both come with rear seats.

The 370Z is a great car and we’re extremely happy that Nissan continues to build and improve the car, but we’re also happy to see more manufacturers stepping up and making fun sports coupes that don’t hit the pocket book quite as hard. 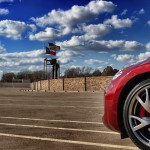 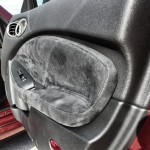 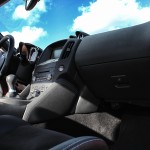 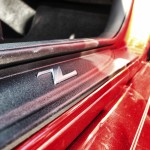 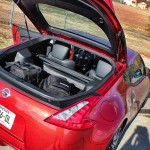 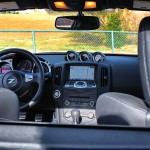 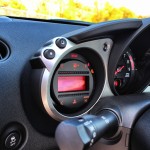 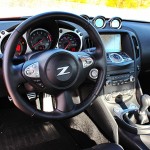 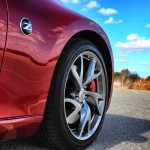 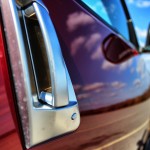 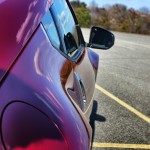 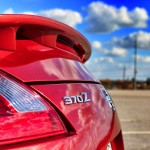 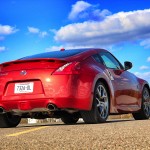 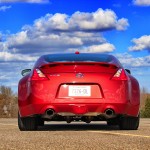 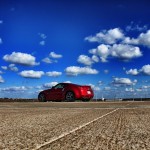 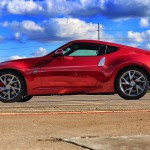 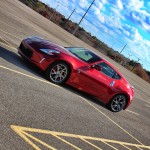 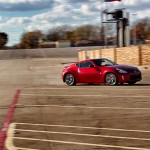 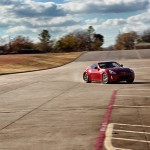 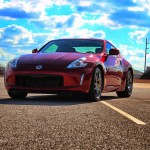 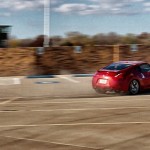 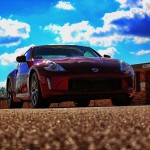 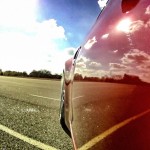