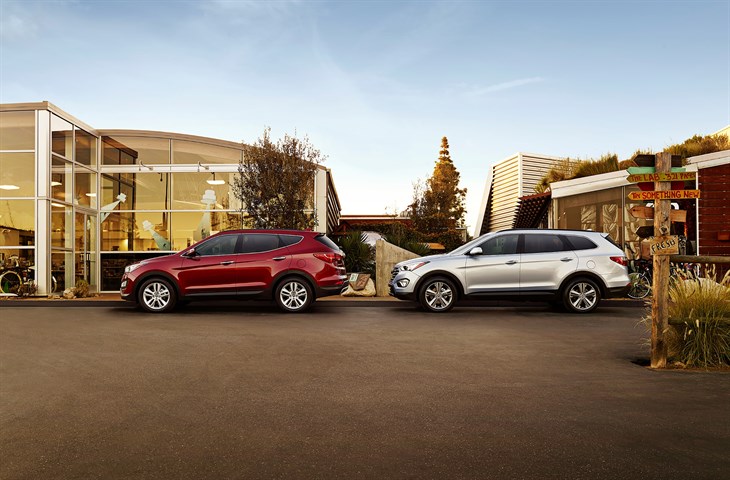 At the time of Hyundai’s U.S. launch some thirty years ago, owning two of Hyundai’s initial offering – the Excel – made excellent sense. As one Hyundai (inevitably) broke, you’d have a second Excel in reserve. The only negative, of course, to that strategy was that the purchase of one Hyundai to use and one as a backup cost virtually the same as one completely credible Accord or Camry, which you could drive all the time and would require exactly half of the available garage space. Time – of course – moves on, and so does Hyundai. 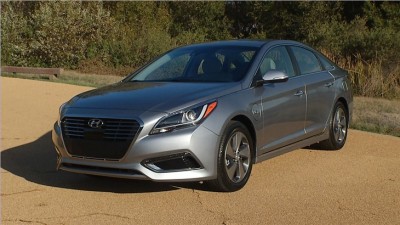 Today you could again consider the purchase of two Hyundais, and having had the benefit of back-to-back test drives in two distinct Hyundai models we’d even recommend it. The first, Hyundai’s Sonata Hybrid, is a more restrained take on Hyundai’s quietly redesigned midsize sedan. With the last stylistic update Hyundai seems to have taken the ‘pop’ out of the Sonata visually, while adding refinement to both the chassis dynamic and interior layout. And in what appears – at least to the layman – as a real disconnect in the development of the midsize sedan, Hyundai’s Sonata grows more conservative as its counterpart at Toyota, the Camry, becomes more of a stylistic outlier. While still wishing for a little more of the verve that accompanied the previous gen Sonata, I can’t argue with the final result; the current Hyundai is one very refined piece of midsize machinery.

Although nothing in the Hyundai lineup would be construed as a gas guzzler, the Sonata Hybrid ventures into diesel territory with an estimated 43 miles-per-gallon on the highway, and 39 in your urban stop-and-go. And that, obviously, is a number fully competitive with any ‘clean’ diesel you’d care to mention; it’s even competitive with those diesels that aren’t clean. And while diesels are known for their prodigious torque at low rpm, Hyundai combines 140 lb-ft of pulling power from its 2.0 liter engine with another 151 lb-ft of torque from its 38 kW electric motor. The end result is smooth, unimpeded acceleration whenever you’re inclined to use it.

Inside, our Sonata Hybrid Limited enjoyed the interior upgrades that are seemingly compulsory with the ‘Limited’ tag. Leather seating surfaces combine with standard ‘proximity key entry’ (I’m quoting here…), push-button start and automatic temperature control. In back, despite the battery pack, your cargo will enjoy over 13 cubic feet of storage space, and can be expanded with the available split-folding rear seat. Were we looking for a companion to a 3-row kid hauler, Hyundai’s midsize sedan would be that companion. And with a Monroney in the mid-$30s, there’s still room in the hypothetical budget.

That 3-row kid hauler might very well be Hyundai’s still-fresh Santa Fe. Available in two guises – Santa Fe and Santa Fe Sport – the 3-row Santa Fe has become the gold standard in the always-expanding 3-row category. Named by Texas Auto Writers as the CUV of Texas in 2013, the Santa Fe still took its CUV category – although not the overall win – two years later, getting more votes than Honda’s all-new Pilot.

We continue to enjoy the refinement offered with its 3.3 liter V6, delivering 290 torque-laden horsepower through a six-speed automatic to either front wheels or all four wheels. On-road composure is, uh, composed, and the powertrain combo provides 5,000 pounds of towing capability, more than ample when hitched to a couple of Jet Skis or small camping trailer. Inside, there’s the just-right balance between enough room for your extended family and too much footprint. This isn’t, thankfully, a Suburban; parking a Santa Fe should never be a strategic exercise…just park it!

You can spec your Santa Fe with a middle bench (SE) or leather-clad buckets (Limited), which gives you seating for seven or six, respectively. Our test Santa Fe was the Limited, and its interior fully lived up to the expectations created by a $40K window sticker. In fact, with a lower back problem on the final day of our drive the best refuge was the Hyundai’s driver seat with the heated seating element turned on and up. Again, it’s the balanced capability that makes the Santa Fe top-of-mind on a great many shopping lists, even with notable competition from Honda, Toyota and Hyundai’s corporate sibling, Kia.

With that, we get to the cult thing. In past years you’d see families with multiple Hondas, VWs and – more recently – Subarus. Obviously, that loyalty developed when the first purchase of a specific make exceeded the expectations of both the buyer and those close to the buyer. At least anecdotally, I see the same thing happening with Hyundai prospects. Their satisfaction with both the car and the ownership process is very high, and in the post-recession wariness of spending big, they regard their Hyundai purchases as not only rewarding; they regard them as smart. And while ‘smart’ may not be as exciting as ‘sexy’, smart can outlast the warranty (and Hyundai’s is among the best in the industry), while sexy can be gone by the first oil change. Both the Sonata Hybrid and Santa Fe are pretty damn smart.