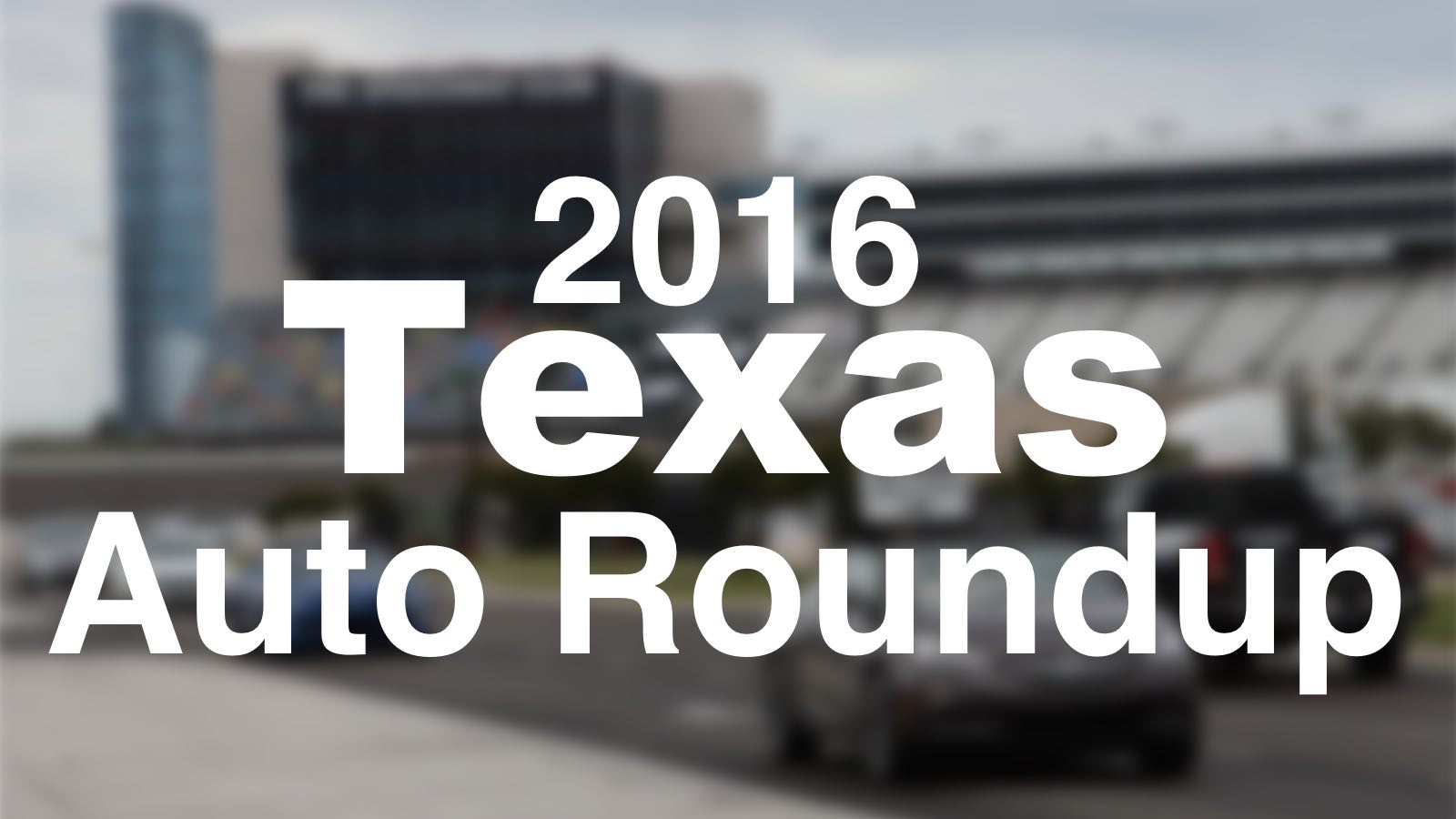 As we’ve written before, the Texas Auto Writers Association (TAWA) is a somewhat loose confab of writers, broadcasters and bloggers covering various elements of the auto industry. And with the bulk of its attention paid to new cars, the organization gets together twice annually to sample most of what’s new. In the fall it’s the better known Texas Truck Rodeo, typically held somewhere between San Antonio and Austin. And in the spring it’s the Auto Roundup, organized in and around the Texas Motor Speedway. Think roughly fifty cars, the same number of TAWA members and only-god-knows-how many gallons of gas getting together over 36 hours, and you have a pretty good idea of what a Roundup – in automotive terms – constitutes.

Photos from the event can be found HERE courtesy of Major League Photography. Want to skip to the results, click HERE.


This year’s Auto Roundup was great, and as always some of the vehicles I really loved won big and some winners left me scratching my head – but hey, it’s democracy in action. One of the most exciting vehicles was the all-new 2017 Chrysler Pacifica. There’s so much great stuff for active families in this new minivan that there’s no way to cover it all here in this short summary, but the Chrysler did win Family Car of Texas, won as the Minivan of Texas and claimed the top spot in the Best New Interior category. Finally, Chrysler’s new Uconnect Theater – found first in the new Pacifica – won as the Best New Feature. So it obviously wasn’t just me…this was a pretty big hit all around.

Another vehicle catching my eye was the 2016 Nissan Murano, which won the ill-defined Activity Vehicle category. There was a lot of great competition in this category; in the end I voted for the 2016 Ford Edge to edge(!) the competition, but I was also really impressed with what the Murano brought to the table. This new Murano had a pretty unique interior, which was far above previous generations, and it handled really well.


In every new year the Roundup is almost too much to get your head around. With the vehicles assembled in one of the Speedway’s garages, the collection constitutes a heady mix of unbridled performance (Shelby Mustang, Dodge Viper), almost decadent luxury (Cadillac CT6, Chrysler 300 Platinum) and – of course – green (Toyota Prius, Chevy Volt).

I spent most of the Monday on the infield track, where products as diverse as Fiat’s 500 Abarth and Jeep’s Grand Cherokee SRT were available for amusement and/or evaluation. Despite my very real affection for the Abarth Cabrio on the street, it seemed too short, tall and front-wheel biased to be fully effective on the track. With that, it could have simply been my technique – or lack thereof – holding both it and me back.

Memories of Carlo Abarth quickly faded, however, as I strapped on the latest iteration of Carroll Shelby’s automotive namesake, the Ford Shelby GT350R. And it was – to channel Carroll hisownself – one fast sumbitch. The power, of course, was a given, but the combination of accessible performance with an almost playful disposition made this the automotive equivalent of the White House Correspondents’ Dinner; it was a laugh a minute, until – of course – I needed to get off the track. TAWA members voted it the Car of Texas, and somewhere between Heaven and Hell Carroll is saying ‘I told you so’.

At the far end of the garage and, by extension, the automotive universe was Chevy’s all-new Volt, with increased efficiency, more electric-only range and – notably – costing less money than the 1st gen. And while the membership’s nod in the category went to the Lexus RX 450h, for me the Volt was an absolute no-brainer. According to GM, with the Chevy’s gas-electric combo the typical Volt owner fills up his or her gas tank once every 1,000 miles; that, for the average driver, would be but fifteen times a year. With this efficiency, you’ll enjoy a responsive platform and tastefully appointed interior, in combination with a transaction price way too close to $30K (after applicable federal and state tax credits). The Volt is a car well worth owning, perhaps while waiting for your Tesla to be built. Or that Shelby to be delivered…


The Texas Auto Roundup was a turning point for me, marking the transition from crawling to learning how to walk as an automotive journalist. Of the wide variety of cars that were at the Texas Roundup, one car stood out for me in particular – the 2016 Dodge Charger R/T Scat Pack, which I drove right after stepping out of the Dodge Challenger Hellcat, a car I had been lusting after since it was announced. Having said that, I want to go on record as saying that if it were my signature on the lease I would choose a Scat Pack every time. Not that the Hellcat wasn’t impressive; actually, quite the opposite. The Hellcats are four-wheel embodiments of pure intimidation. Like a high caliber handgun, proceed with great care and respect.

Dodge’s Scat Pack, on the other hand, feels just as powerful as its body-building brother, but without making you doubt your own ability as a driver. When we tested the Hellcats we had a professional driver riding shotgun, making sure we didn’t steer Dodge’s 707 horsepower into a tree. With the Scat Pack we were left to our own abilities, attempting to control the 6.4 liter 392 Hemi and all of its 485 horses.

There is a reason there is a roughly 30-40 grand price gap between the two Mopars. The Dodge Charger R/T Scat Pack is a car that can do everything from school drop-offs to first impressions at a business lunch. It has the tech and horsepower to make even the dullest of commutes feel exciting. Prices start at $40,000, which gets you a lot of bang for your buck.

The only car I drove which delivered a heavy dose of reality was the 2016 Honda Civic Coupe LX, equipped with a manual transmission. Although the Honda feels well made, its manual transmission felt spongy; even in gear the shift lever would wobble like a joystick on an arcade game. Admittedly, this was the base model in the Civic line up, and should still be a consideration for anyone looking to invest in a first car or college graduation gift. Prices start at $19,000.


The 2016 Buick Cascada convertible may just possess the right amount of allure to entice younger buyers to actually own a Buick. Essentially a rebadged Opel Cascada, this is an affordable near-luxury convertible that looks terrific and comes standard with leather seats, a nav system, 20-inch wheels and adaptive headlights. With a 200 hp, 1.6 liter turbocharged four under the hood, the Cascada doesn’t perform like one of its more expensive European cousins. But that’s not the point. Once they see twenty-something women driving it, Buick management will be happy. And that’s the point of the Cascada…

The 2016 Subaru WRX is a family sedan. Or is it a performance car? Nope, it’s both – and that’s what makes the WRX remarkable. It doesn’t seem like much until you hit the gas and hear the engine roar. This is an evolution of the same car famous for multiple World Rally championships, yet it also demonstrates perfect street manners without emphasizing every bump in the road. The interior is still just functional. But who cares? The turbocharged 268 hp, 2.0 liter engine is the main reason for all the fun. And (surprisingly) the CVT transmission only adds to it.


Now that the dust has settled and the winners announced, I’m going to make some observations that came to me during the two days of driving we enjoyed. Of all the cars we drove, only 4 or 5 had a manual transmission, and those vehicles were primarily performance cars. In addition, only 4 or 5 vehicles came with a key. The automatic transmission has taken over, and well it should; we spend a lot of time simply sitting in traffic, where an automatic transmission comes in handy. As far as keys go, we push a button in almost every modern vehicle to start the engine.

From my standpoint there were lots of good vehicles at the Roundup this year. My favorites were the 2016 VW Beetle Dune Convertible and the 2016 Chevy Cruze Premier. I liked them both, because they surprised me in how they felt and how they performed. There was not one thing that stood out, but as a combination of attributes each car made me smile. I also liked the 2016 VW Golf R. Again, it just made me smile…all, in short, were simply fun.

In another surprise, I liked the 2016 Jeep Grand Cherokee SRT as much as the 2016 Range Rover. Times change, and in my mind FCA’s Jeep has done a credible job playing catch up with the Range Rover.

It has become abundantly clear, in my opinion, that with the safety features now offered on basically every new vehicle we are all being trained to accept autonomous vehicles on our roads, sooner rather than later. At some point there will be lots to do in cars and SUVs besides drive them. What today is a distraction to a driver will be essential to the operation of an autonomous vehicle.

As Bob Dylan put it, the times they are a changin’. In the automotive universe, nowhere is this more apparent than at TAWA’s annual Texas Auto Roundup. Head em up…and move em out, Rowdy Yates!