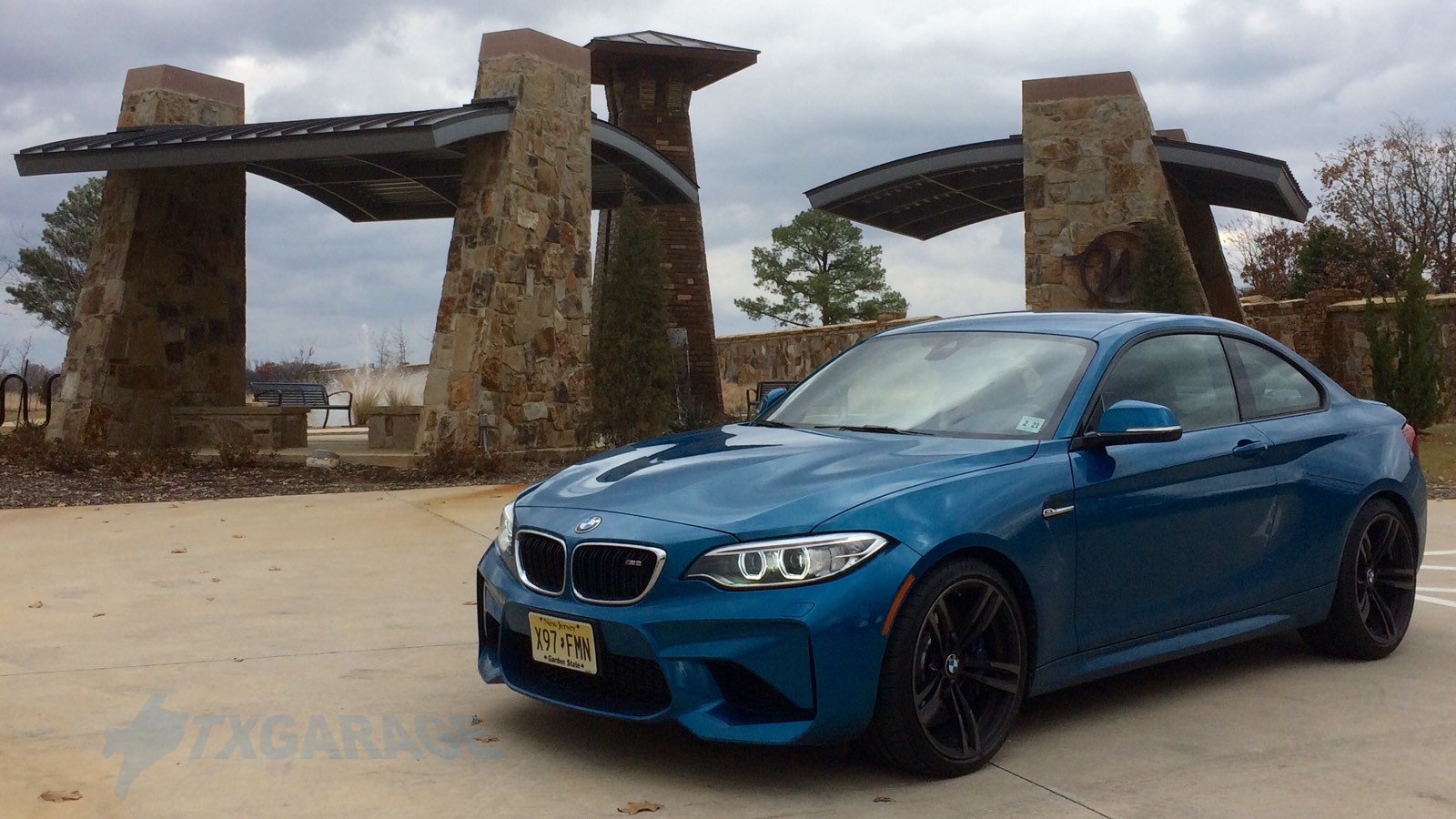 With a planted stance and athletic mien it looks ready for Europe’s Touring Car Championship. And if coated in BMW’s Long Beach Blue Metallic – as our press example was – prepare for five minutes of animated conversation with any shuttle driver or valet attendant coming into the M2’s orbit. But it’s behind the wheel, after brief stints over the last year in BMW’s all-new X1 and refreshed 340i, we discover BMW still builds viscerally compelling – or compellingly visceral – sporting machinery; it’s new-as-of-this-year M2 is stunning in its compact muscularity, with moves like Fred Astaire and the seductiveness of Ginger Rogers. Look ‘em up…

Despite its newness on the BMW showroom, there’s little new about the BMW’s M2 recipe; BMW has been doing this shtick seemingly forever. It began – as you’d know – when BMW inserted a full two liters of four cylinder in its 1602 2-door, thereby creating the iconic – instantly iconic – 2002. And while its increased cubes upped the horsepower ante, it wasn’t until receiving fuel injection and the tii suffix that BMW’s smallish shoebox became truly exciting. Horsepower went from 113 in the cooking ’02 to 140, and that – ladies and gentlemen – is over 30%. Of course, when tested by Car and Driver magazine in its February, 1972 issue, it also cost more. The standard 2002 ran about $4K, while the tii eclipsed $4500. Forty years later you can spend $4K on one of BMW’s many available packages or options, on top of the 2 Series’ $35K starting point.

Although the M2 might use the 2 Series as a start, the differences are many and manifest. The ‘2’, of course, is no slouch, offering the astute consumer a well-developed turbocharged four cylinder within a compact, responsive platform. Although not a direct successor to the much earlier 2002, you can certainly envision it as a spiritual successor to the original, 1975-ish 3 Series. That car enjoyed an upright stance, but was far more organic in its execution than the 2002. And it was far more refined in the way it went about its business, the rawness of the 2002’s ‘60s-era platform was all but eliminated by 1975.

The 2 Series succeeded BMW’s 1 Series, while the M2 is the logical – and numerical – successor to BMW’s 1 Series M Coupe. With that, BMW dealers and their enthusiastic, more astute ‘M’ clientele can enjoy the more organic profile of the ‘2’ with the added drama of 365 horsepower and 343 lb-ft of torque, delivered between 1400 and 5560 rpm. Connected in our car to an extremely fluid, well-connected 6-speed manual trans with automatic rev-matching, the M2 will reach sixty from a standing start in 4.4 seconds. Count it off: one-thousand-one, one-thousand-two, one-thousand-three, one-thousand-four, one – we’re there! This is crazy stuff coming from a 2-door, 4-passenger coupe fully comfortable in real world, day-in-day-out commuting.

Beyond, of course, a world class powertrain is the world class platform. Rarely has BMW’s suspension spec been expressively sexy, but it’s almost always especially competent. With the M2 we get some ‘sexy’; the suspension pieces both front and rear are constructed from aluminum and come with M-specific elastokinematics. And if you’re baffled by ‘elastokinematics’, so – my friends – is spellcheck. But know that in governing the ‘movement of the wheels under compression’ they do a damn fine job, despite their hard-to-pronounce descriptive.

With 365 horsepower under its shapely hood, and 19-inch forged alloy wheels putting that power to the pavement, what’s it like behind the ergonomically-shaped wheel? Nothing short of fun, and we mean ‘fun’ in its most heightened, 3-letter form.

The M2 is absolutely raucous when you want it to be, while positively sublime when you need it to be. Our Southlake-area ‘burb is controlled by Stepford-like speed limits, and the M2 can drop into that dazed stupor with the best of the Infiniti 3-rows populating most of the garages. But once out of Southlake it’s the Bonneville Salt for anyone (everyone!) with a penchant for the responsible pursuit of speed. We had no high speed runs during the long weekend with the M2, but BMW claims an electronically-limited top speed of 155 – and that number seems wholly – and Holy – credible.

We liked the leather-covered buckets, reasonable access to the backseat, and great space for touring with that backseat folded. The EPA-estimated fuel economy of 18 City/26 Highway/ 21 Combined is reduced to absolutely nothing if you keep your foot in it, but at under $3/gallon for 93 octane why wouldn’t you keep your foot in it?

At a window sticker of $55K very few of us will own one. But if BMW can supply the U.S. with a sufficient supply we might be able to think pre-owned. Given reasonable care – and an extended powertrain warranty – I’d be in a 5-year old example at around $30K. I’m thinking a white one, with a motorsport stripe. The white is compelling – and the stripe oh-so-visceral.