In a remembrance of 2016 by your literary servants at txGarage, I referenced my few days behind the wheel of BMW’s M2. It was an amazing reminder of what BMW is capable of producing when engineers retake the lead from those conducting focus groups. But an Honorable Mention went out to Alfa, on the cusp of bringing the Giulia sedan to these United States. And while we haven’t been behind the wheel of the new 4-door, we know it will be capable and credible; it will also be north of $40K. For those hoping to motor in something Alfa-esque for less money, the folks at Mazda are providing it in the guise of a modestly refreshed Mazda3. Think Giulietta, Alfa’s small, front-wheel drive hatch, but available here – at a Mazda showroom.

Offered by Mazda in both 4-door (sedan) and 5-door (hatch) variants, we’re attracted to the versatility of a hatch, but if the other side of the garage is an SUV or crossover there’s an argument to be made for a capable, accommodating 4-door sedan. And in Grand Touring guise – as the moniker would suggest – the Mazda3 takes no prisoners in its competitive set, offering everything you need in a compact footprint save – possibly – all-wheel drive. Mazda even considers the needs of the manually adjusted, providing a 6-speed option to those still wanting the luxury adds, something my Subaru execs failed to do. (Like most OEMs, Subaru thinks you want a manual to save money, even when you later add a $400 short-shift kit and $200 shift knob.) We’re in, and at a price point for the Grand Touring well under $30K, could be all in. Here’s a look, then, at the new(ish) Mazda3… 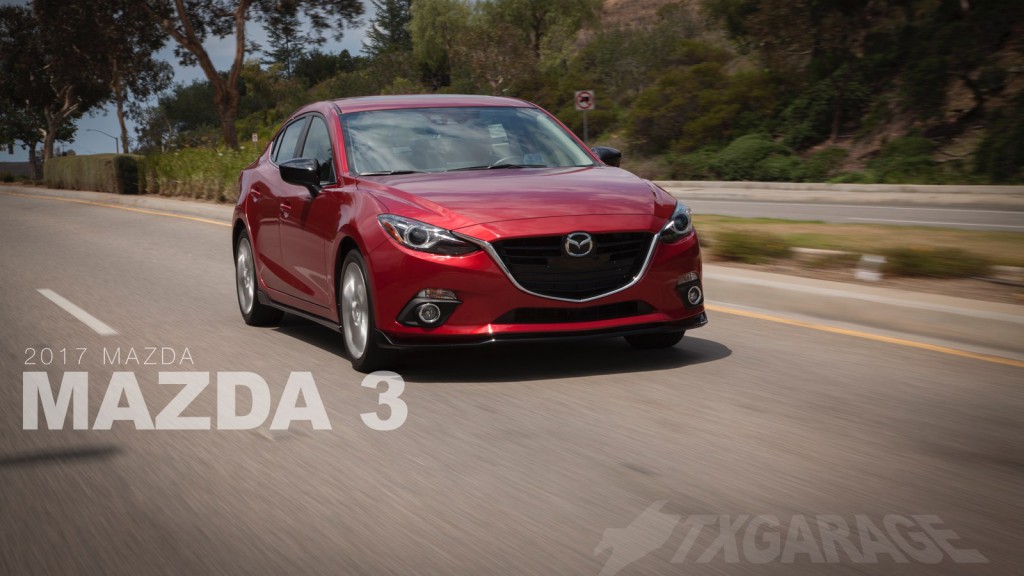 EXTERIOR: An early beneficiary of Mazda’s KODO: Soul of Motion design language, the Mazda3 gives owners an overtly organic shape that is what we used to call ‘easy on the eyes’. Its freshened front fascia is aggressive, but without the meth-induced indulgence that marks today’s Lexus and – to a lesser extent – Toyota products. The windshield is aggressively raked for better aero, but it also provides a profile that is as much airfoil as automobile.

In either 4-door or hatch form, the Mazda3 greenhouse supplies adequate window area for outbound visibility, but you won’t confuse it with your dad’s Volvo wagon. Since we mentioned Volvo, however, you might confuse it with your sister’s Volvo S60, as the general proportions aren’t too dissimilar. And while, in profile, we might argue with the amount of front overhang the design team allocates, that gripe is offset by a trunk that is fully integrated rather than grafted on. And that trunk is deceptively spacious, with a low liftover height, wide opening and – with the folding rear seats – surprising capacity.

In sum, we’re all about the footprint and all that (modest) metal sitting atop the footprint. In a sea of SUVs, CUVs and pickups the Mazda3 is an outlier, but a compelling one.

INTERIOR: Think Alfa-esque. The front buckets, covered in perforated leather on our Grand Touring trim, provide easy ingress, more than adequate support, and look like something punching well above the Mazda3’s $27K price point. The driver grips an ergonomically shaped wheel that offers that happy balance between substance and – for smaller hands – an accessible handle. The dash supplies a tach front and center, with speedo inset into the tach face. Your speed can also be monitored on a heads-up display, which is rather nice. But you’ll have to put the phone down to see it.

In back, know four can sit comfortably, there’s enough distance between the rear backrest and back of the front passenger seat to comfortably fit a child seat, and the fifth passenger will be wishing he or she had taken a cab. But that’s OK, as it’s assumed you have a 3-row Mazda9 on the other side of the garage. Again, we like the versatility of the hatch, but won’t argue against the relative security of the trunk – as long as they give you a folding rear seat.

THE DRIVE: There’s no argument with the available 2.5 liter four connected to a 6-speed manual, but I’d have no argument – if spec’ing the manual – to go with the 2.0 liter four. It’s only if opting for the automatic that we’d prefer the 2.5’s 184 horsepower, relative to the 2.0’s 155 horsepower. And while we applaud Mazda’s manual availability, we’d like it even more if the throws were shorter and the engagement just a little more precise. If they have a product guy or gal coming thru D/FW, they can drive my Crosstrek, as it’s a d*mn good example of what a stick should feel like in a front-wheel or all-wheel drive powertrain.

SUMMARY: With all that is out there in the new car market, very few options provide both a reasonable dose of practicality mixed with a visible dose of emotion. Alfa’s Giulietta would supply it, but FCA CEO Sergio Marchione ain’t (apparently) gonna’ bring it. Audi’s A3 does much the same thing as the Mazda3 sedan, but would do it at a price point $8K higher. So we’ll take Mazda’s interpretation of the European sport sedan, and thank God – or KODO? – for its convenient availability on a Mazda showroom. Zoom-zoom?