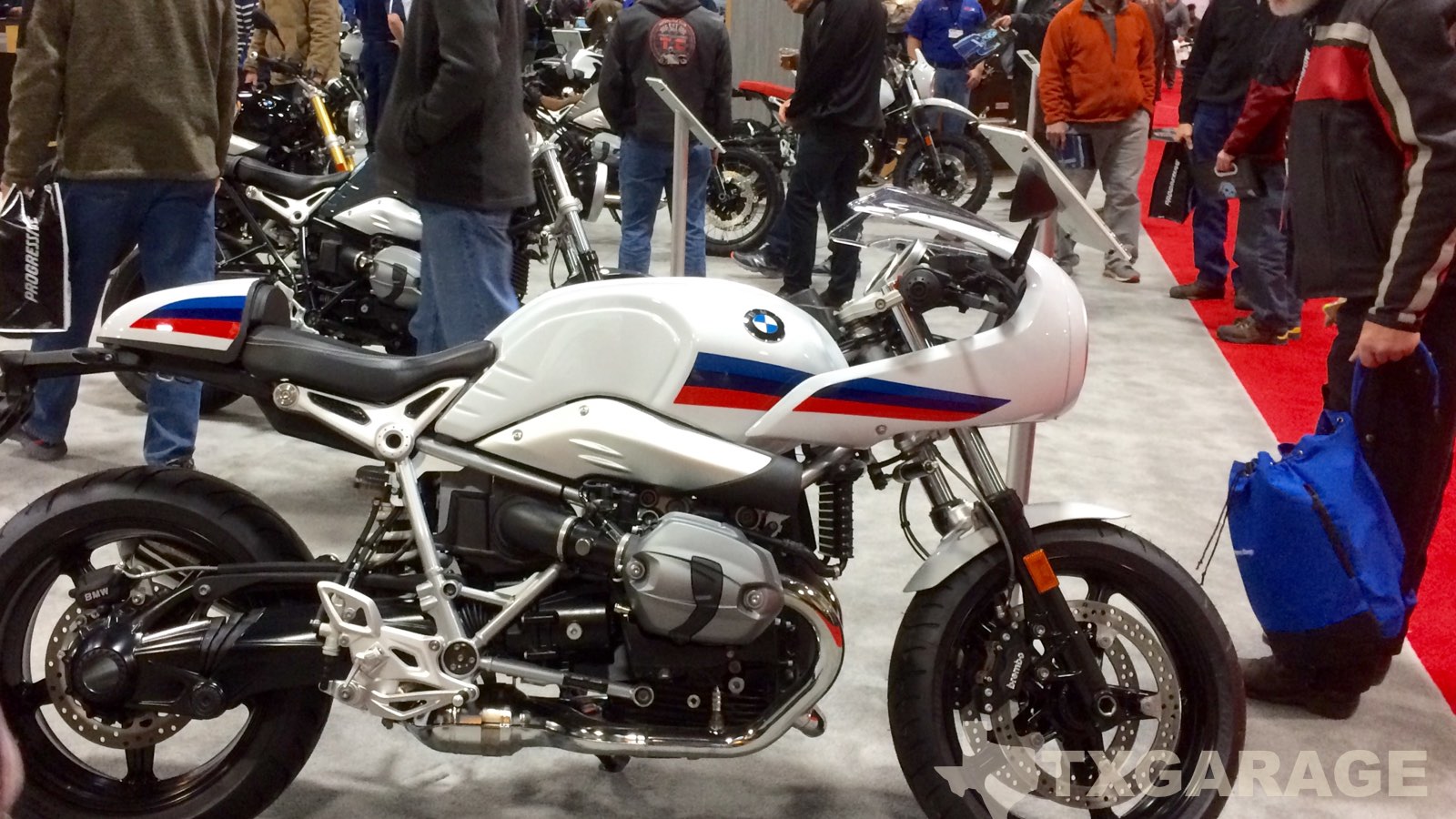 For Dallas area power sports dealers and motorcycle manufacturers, the annual Progressive International Motorcycle Show presents the best opportunity to meet new riders and potential customers. It is the only event that brings together all the various interests of motorcyclists in one place. – Carl Diehl, Dealer Principle, BMW Motorcycles of North Dallas 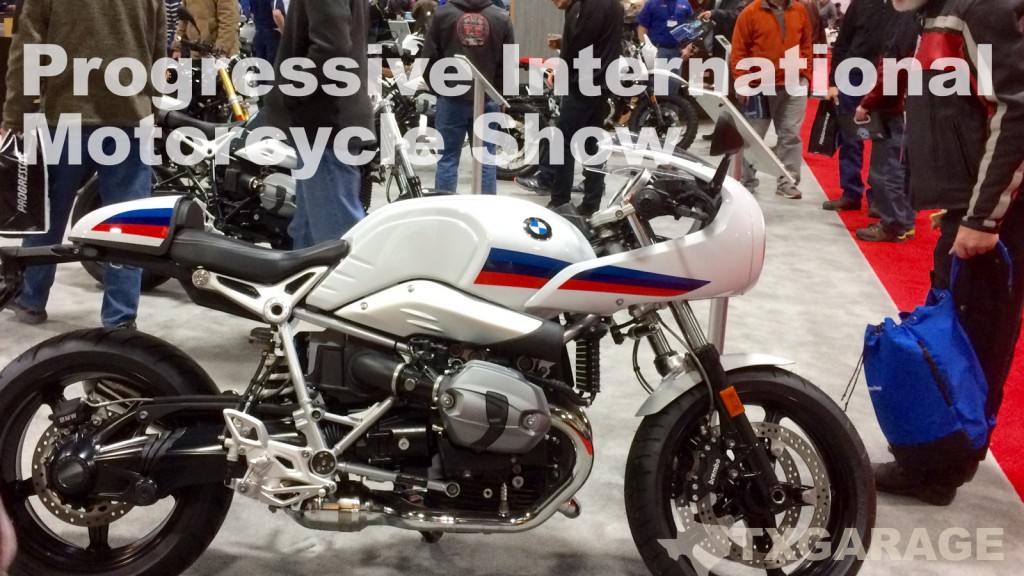 As this is written it’s Sunday morning, Dallas is sitting at 23 degrees Fahrenheit, and even Kris Kringle can’t bring himself to think about motorcycles. (We think he rides a red-nosed Royal Enfield…but still working to confirm.) Regardless of the temps across the country, the caravan comprising the Progressive International Motorcycle Show is rolling into the Kay Bailey about the time you read this. And within its many trailers and still-crated displays is the bulk of what will excite riders and their pillions over the next several years. From BMW Boxers to Suzuki’s ‘Busa and Yamaha’s redesigned R6, the Progressive Insurance – sponsored show is an adventure-infused mix of road, track and trail.

The Great Recession wasn’t exceptionally great for the motorcycle industry. Suzuki – famously – simply canceled one model year, deciding its overstuffed warehouses weren’t in need of any additional inventory from what would have been the 2010’s. Other OEMs essentially limped along, with little new to talk about – and few customers to listen if they had something to talk about. Those manufacturers targeting age groups other than 20-somethings were less challenged, as those older targets either had the cash or could obtain the credit. But in a financial downturn not seen for some eighty years motorcycle showrooms – and their financial prospects – had dimmed.

This winter the lights are back on, and few will shine brighter than those at this week’s Progressive International Motorcycle Show at the Dallas Convention Center. In a season that spans seven shows from November through February, the first show in Long Beach and this show in Dallas provide the window onto the riding season most accessible from those respective zip codes. With any luck you could actually ride to the convention center, bringing your Kawasaki from Keller or your Kona down the Katy.

If you get there, know there’s a lot to enjoy from both the bike manufacturers and all those supporting the industry. In no particular order, consider the following, gleaned from notes taken at Progressive’s New York and Washington, DC stops:

We’ll begin with the Europeans; there, after all, is where motorized society started. We remain very intrigued by BMW’s multiple takes on its well-received R nineT. This year the German bike maker (they also make SUVs…) is rolling out a Scrambler, Racer, Urban G/S and minimalistic Pure, and with window stickers (if there were windows) of well under $15K any one of them is a lot of bang for the buck. Ducati brings two new variants of its Scrambler, including a more dirt-specific Desert Sled, as well as a red hot 1299 Superleggera and revived 800 Monster. And KTM, with its mix of on-road, off-road and Adventure-specific bikes, continues bringing a something-for-everyone-and-anyone mantra to its area showrooms.

Among the Americans, Harley-Davidson is aggressively touting its all-new ‘Milwaukee Eight’ mill, while we were most taken with the Sportster-based Roadster. Indian is showing a Redwing-themed concept based on its accessible Scout, and Can-Am is celebrating its first decade – and 100,000 sales – of its Spyder trike with an across-the-board price reduction.

The Japanese, of course, all offer prolific lineups of street, dirt and dual-purpose machinery. Honda brings to market an all-new Rebel in 300cc and 500cc displacements, along with – way on the other side of the showroom – an all-new CBR1000RR, in three guises: Serious, Very Serious and You-So-Need-Therapy Serious. Yamaha offers an aggressively refreshed FZ-09 for the hipsters amongst us, as well as a subtly aggressive redesign of its R6 roadracer. Kawasaki pursues some street cred with a new Ninja 650, while those wanting it both ways might look at the entry-level, Versys X 300 adventure bike. And Suzuki’s release of an all-new GSX-R 1000 reaffirms its return to a competitive space among Japan’s Big Four, while the revival of the 200cc Suzuki VanVan makes us glad they’re still around in this 2-wheeled universe.

The astute among you will notice I haven’t mentioned Aprilia, Moto Guzzi, Triumph or Vespa. Officially, those manufacturers are not part of the Progressive lineup, but local dealers may sponsor their own displays in Dallas; all were represented in D.C. And all three bike makers have new additions to their street fleet, as well as credible retail reps in the Dallas/Fort Worth area. If you don’t see them at the Convention Center, make a point of seeing them back at the showroom.

Beyond the bikes, of course, are the accessories, provided by both national distributors and local retailers. At a previous show several years ago I bought a leather jacket I’m still enjoying, while at this one – in conversation with a rep from accessory maker Twisted Throttle – I believe I’ve identified a tail bag that would work beautifully on my Bonneville. The tail bag, of course, is what old guys use when no one will (ever!) get on the bike with them.