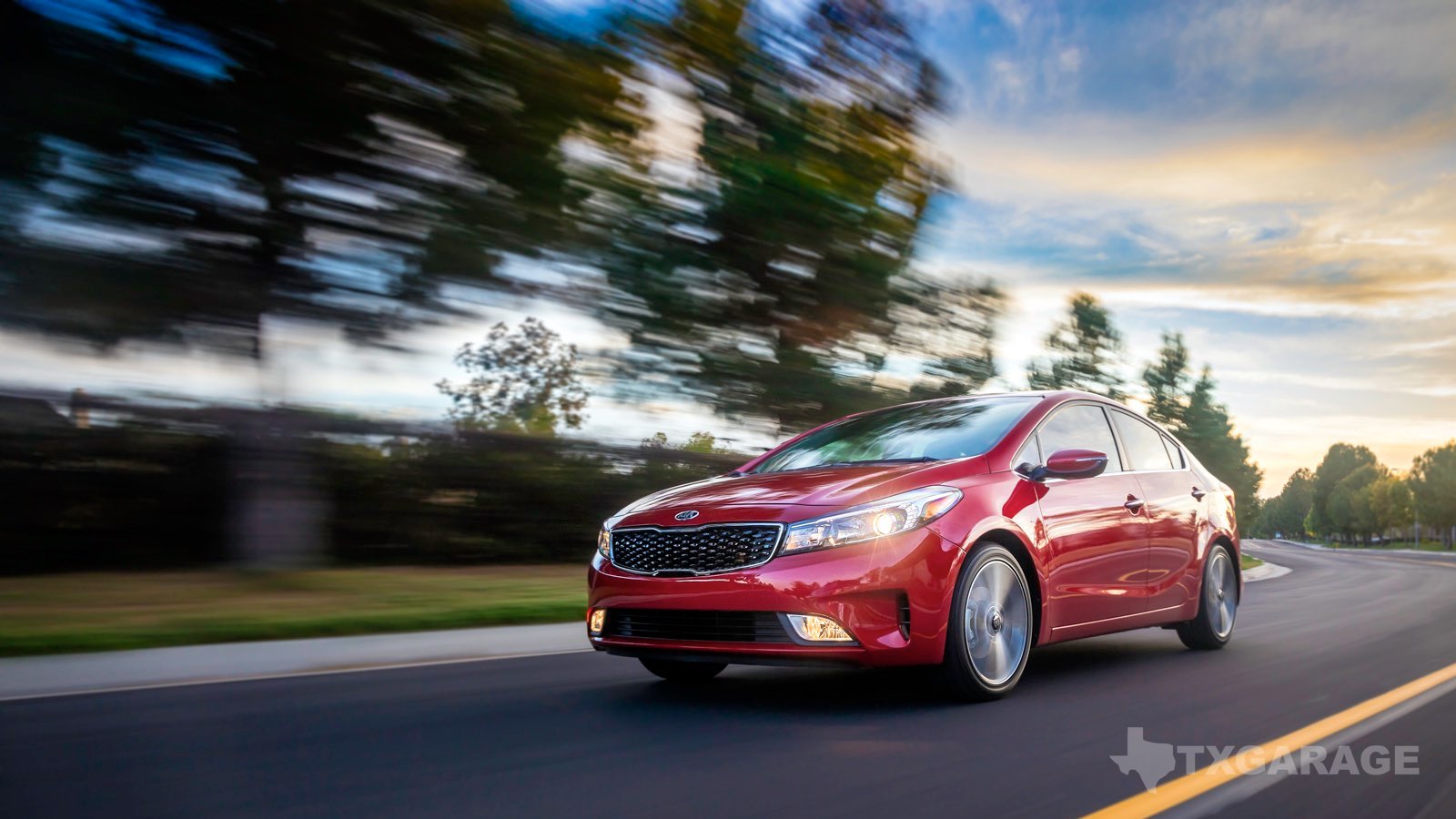 As mentioned in our recent overview of the Kia Cadenza, there’s a lot of excitement about to happen on Kia showrooms, most of it in the form of the recently announced Kia Stinger. A 4-door GT looking to successfully wake up a compact/midsize category dominated by BMW’s 3 and 4 Series, the Stinger provided quite the buzz at its Detroit debut. And that buzz looks to continue as it races into the marketplace later this calendar year. With all of that, we’re here to talk about Kia’s Forte S 4-door sedan, ‘cuz somebody’s gotta’.

Kia’s smaller, more benign Forte lies in that bedrock of suburban commuting, the affordable 4-door. With Honda’s Civic acting – seemingly forever – as the cornerstone of the segment, and Toyota’s Corolla serving as understudy, most other makers have had a difficult time making headway onto America’s driveways. Hyundai’s Elantra has done – after a fashion – a seemingly credible job, but few brands have that one name identity (think Prince or Adelle or Pink) of the Civic.

Korea, Inc., however, which includes both Kia and its corporate parent, Hyundai, is on the move. The refreshed Kia Forte, in ‘S’ guise, is proof positive that a smallish 4-door sedan remains a credible consideration. And for me that’s a bit of a revelation, as I’ve been a fan of Civics since before my first purchase of a base 2-door in 1979, which led to ownership of two hatchbacks – simultaneously – in 1989 and a 4-door Si in 1994. All were incredibly good cars, and I’m still wishing we had kept the ’89 hatch – as a 3rd, runabout-type car – in the family stable. But that was then, this is now, and the Forte has a good deal (this should be in bold typeface) going for it.

As a fan of hatchbacks since before their revival, I’m surprised by my affection for Kia’s utterly conventional 3-box profile. Perhaps fueled by nostalgia, or perhaps a consideration of the Grand Cherokee on the other side of the garage, I’m beginning to think the counterpoint to the inevitable SUV or crossover may be the 4-door sedan (if not, at this point, a late-model Miata). What Kia describes as its ‘European sport-sedan styling’ doesn’t seem to miss the mark as a descriptive, and Kia’s team hasn’t missed the mark in its execution. The lines are cleanly drawn, and show admirable constraint and minimal conceit. An updated fascia greets you, as do newly designed headlights with available Xenon HID lights. Of course, if you’ve done the face you need to do the *ss, where taillights get an update and, again, come with an optional (LED) upgrade.

Inside, you’ll be impressed with the Forte’s livability, but there’s little here to surprise and delight; instead, the Kia team has opted for credible, intuitive function. (And can we have a Hallelujah?) Gauges are identifiable, controls for both HVAC and audio are intuitive, and if there were distractions between the steering wheel and the passenger side rearview mirror I wasn’t distracted by them. Plastics and textures weren’t what I’d call great, but neither were they offensive, and certainly on par with many sedans costing $5K – $10K more.

Behind the wheel I found the steering reasonably well connected, and the ride/handling balance fairly well controlled. This was the Forte S, which boasts a sport-tuned suspension. And if that descriptive creates a twitch in your southern exposure, know this is a relatively tame ‘sport’ suspension. The specs don’t reveal what was done, but in producing a predictable reaction to your inputs Kia didn’t follow Hyundai’s path in spec’ing a ‘Sport’ Elantra. There, the Hyundai team tossed out the rear end and in its place installed a fully independent suspension. Kia retains the old, reliable CTBA (Coupled Torsion Beam Axle), and while it does its job in keeping the Forte’s *ss off of the pavement, it remain fully in the last century – or the one prior to the last century. Keen observers will note the Mustang is now equipped with IRS, and if Ford’s team can do it, anyone can.

Under the hood is a new, normally aspirated 2.0 liter four that is adequate in power – 147 hp and 132 lb-ft of torque – and simple in specification. Notably, no turbo this or supercharged that; this is a normally aspirated four, and while it may lack the torque or power of the Hyundai/Kia 1.6 liter turbocharged four found in this year’s Soul, it also doesn’t have the complicated maintenance profile of an old turbocharged engine. It’s simple: the more you have moving around under the hood, the more you’ll probably spend in keeping its many parts moving around. We liked its responsiveness, and it hooks up to the also-conventional 6-speed auto (a manual is available) remarkably well.

At roughly $20K for a comprehensively-equipped Forte S, the package seems like a homerun. Ours was equipped with $1500 of tech, and that’s fine; the tech package didn’t overwhelm, nor did it distract. Kia’s UVO3 telematics is standard, and includes – we’re assured – a ‘suite’ of core smartphone functions. You know, should the act of actually driving become too monotonous.