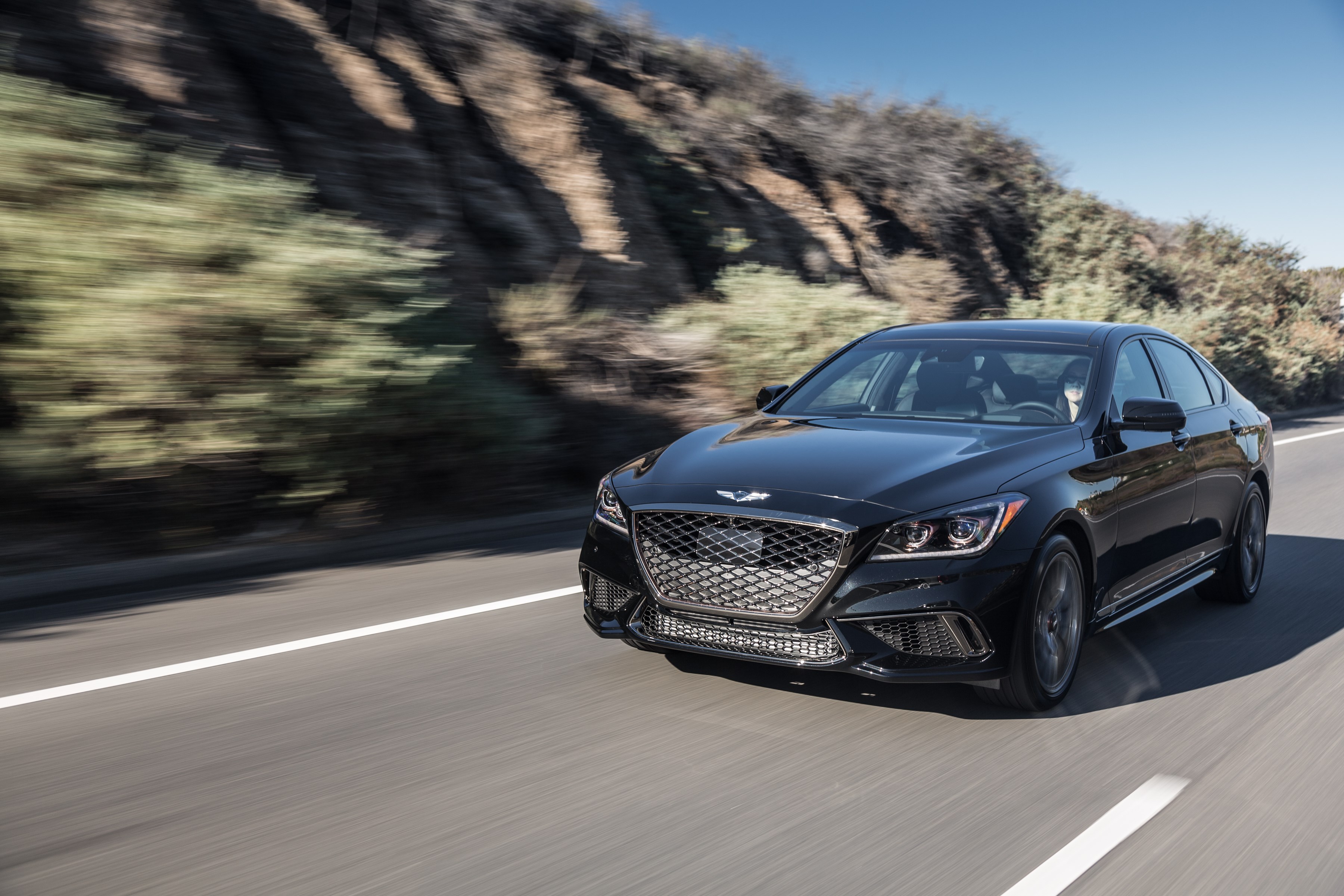 It begins – as most things do – with someone else’s idea. We would go back to GM chairman Alfred Sloan, as it was Sloan’s concept to put a customer in a Chevrolet, and as that customer rises in income and status you have a division to accommodate maturing tastes and disposable income. It was this strategy which positioned Buick, GMC and Cadillac above Chevy in the General Motors lineup. More recently (in the middle of the Reagan administration) both Toyota and Nissan embarked on separate plans to ‘Sloan’ their lineups with upmarket, aspirational brands. Toyota’s Lexus was a wild success while Nissan’s Infiniti remains a work in progress. On first blush, Hyundai – in pursuing a similar strategy with the independent launch of its Genesis franchise – looks intent on splitting the difference: a moderately successful…work in progress.

CHAPTER ONE: Our test vehicle, a Genesis G80, moves to the Genesis ‘showroom’ (more on this in chapter two) from the Hyundai franchise, where it served as one of three Hyundai Genesis models – the Genesis coupe sat below it, while the aspirational Equus stood above it. In moving to the separate Genesis brand there were only tweaks in content to the G80, most of them made in 2016. But minimal changes don’t in any way minimize what the team at Genesis has crafted here; this is one impressive footprint adorned with what we’ll call conservatively expressive (you know – Trump on a teleprompter ) sheetmetal.

Within what Genesis product planners regard as the G80’s competitive set, you’ll find Cadillac’s CTS, the Lexus GS, Infiniti Q70, BMW 5 Series and Mercedes E-Class. You won’t perceive the Genesis sculpting to be as expressive as the Infiniti or Lexus, but you will find it suggesting the same degree of substance as any in this category, save – perhaps – the Benz. We like the prominent grille, and the visual balance between its lower body and greenhouse provides a planted, quietly dynamic platform.
Inside, comfortable buckets up front and a generous rear seating area make seating for five plausible, if not necessarily practical. Opt for our test vehicle’s Ultimate package and you have your choice of either black or ivory leather. We enjoyed the ivory, which is accented by black piping; with that, black and ivory is ‘it’ for selection, in a category absolutely rife with personalization. Give me saddle, brown or gray options forgawdsake, even if adding those choices would add a couple of grand.

We also enjoyed the Genesis dashboard, while wondering if we can still call it that. The gauges are supremely clear, and the Genesis’ 9-inch center screen seemed large enough, without doing a Tesla and dominating the dash. And we continue to like Hyundai’s take on the marriage of audio, ventilation and navigation, the control of which can be as sophisticated or as simple (we like ‘simple’) as you wish. There may be too many controls on the steering wheel for our tastes, although its size and thickness seem just right. And if it’s wood on the G80 dash, its stain (black) and texture do a damn good impression of the fake stuff; Acura’s MDX crossover shows a better way.

Under the hood, Genesis prospects have their choice of a responsive 3.8 liter V6 or 5.0 liter V8, generating 311 horsepower or 420 hp, respectively. Ours had the 3.8, and while knowing there remains a strong (and loud) affection for eight cylinders propelling midsize and large sedans, our 311 horsepower (at an admittedly low elevation) did just fine, thank you very much. If we could legally do ‘the ton’ heading west on I-20 we’d opt for the V8, but between NorthPark’s Neiman-Marcus and Nordstrom the V6 will do beautifully; hit the ‘sport’ mode if feeling feisty.

The Genesis powertrain is complemented beautifully by the platform, combining a rigid structure with compliant, all-independent suspension. We’re conflicted between ‘serene’ and ‘sublime’ as the descriptive, so we’ll use both. But rarely have we enjoyed the competence and comfort in a sedan that comes well short of nudging the $ix-figure tipping point, and our Genesis G80 was just half that. The BMW 340i made a similar impression, and enjoys a similar price point. But while the 3 Series has grown in every dimension, it still occupies the compact rung among four door sedans, while the G80 is almost a ‘tweener – a larger interior volume than BMW’s 5 Series, but not quite stretching to the footprint of the 7 Series. But BMW sells its 3 Series and 5 Series and 7 Series in showrooms geared to its upmarket clientele, which bring us to…

CHAPTER TWO: As this is written, and driving into the near future, Hyundai has established no separate showroom facilities for Genesis products, instead opting for ‘pop up’ showrooms within existing Hyundai dealerships. In some Hyundai showrooms this might work, but in the one we visited in suburban Washington, DC it didn’t work at all. The G80 was wedged between the service counter and sales desks, with barely enough room for a selfie. And while Hyundai products are stone axe reliable, you’re still going to hear some complaining and explaining at the service counter, and that’s not conducive to making an upmarket decision.

Genesis mitigates its lack of exclusive showrooms with the offer to pick you up…you know, kinda’ like Enterprise. They’ll bring the Genesis to you for a demonstration drive, and after the purchase they’ll happily make arrangements to drop your Genesis off for any servicing. Those initiatives are all well and good, but any number of prospects – including yours truly – are not really interested in hosting sales or service personnel in their homes; it’s a private home and not a Genesis showroom. In business it can be likened to hotel officing, something 20-and-30-somethings in the workforce are apparently embracing. And when those youngsters start paying $50K and up for a new car it might be time to stop building showrooms.

As it sits – and drives – we’d put the Genesis G80 on any shortlist of viable, dynamic sedans, but we’d also top out our investment at $60K. And finally, there’s good news: if you still find the showroom intimidating, take comfort – there is no showroom.