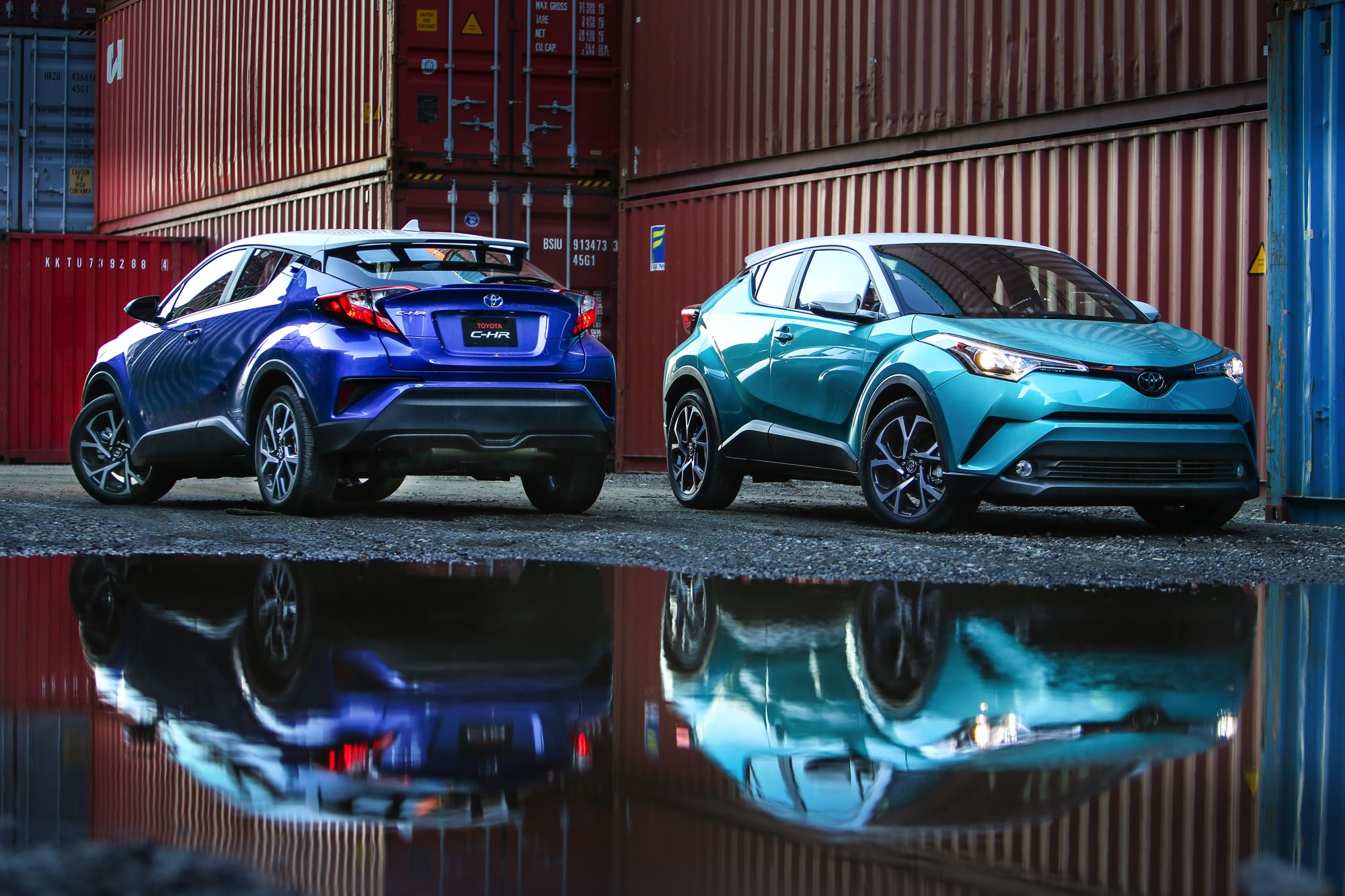 It’s always fun to drive something new, especially when that ‘something’ is brand new. We had that opportunity last week in Austin, previewing Toyota’s brand new C-HR. And if you’re wondering (we were), the ‘C-HR’ stands for Coupe High Rider. Really.

Austin has become something of a poster child for Millennials, those individuals born between 1982 and 2004. So it was a natural pick for Toyota to introduce a car they say will find a large contingent of first-time car buyers among this group. (And in Austin, you know these Millennials won’t be living in their parents’ basement, ‘cause homes down here don’t have basements!)

In this vein, the press was housed downtown at the trendy new Hotel Van Zandt, while the press conference was held at Fair Market, a nearby warehouse space I last visited for the HandBuilt Motorcycle Show. For Toyota, and in keeping with the Millennials theme, Fair Market was very simply set up with comfortable white sofas and chairs. And, of course, a beautiful green Toyota C-HR was the centerpiece, under the lights. The main presentation was by Hiroyuki Koba, the deputy chief engineer, who is based in Japan. 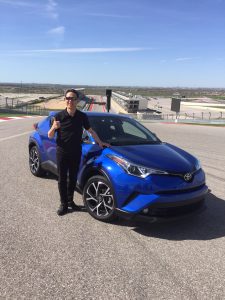 Hiroyuki Koba standing next to his prodigy, the 2018 Toyota C-HR, on a visit to Turn 1 at the Circuit of the Americas racetrack in Austin, Texas.

The C-HR is a crossover, which is the most popular vehicle segment these days. It uses the Toyota New Global Architecture (TNGA). Appearance wise, for a small car it boasts a muscular look. The C-HR is powered by a 2.0L DOHC 4 valve/cylinder engine producing 144 bhp @6100 RPM, while Torque is 139 lb-ft @3900 rpm. Seating position is high, giving you a commanding view of the road. Front seats and accents are nicely appointed. The only transmission available is a 7-speed (after a fashion) CVT. Rear door handles are intentionally mounted high and to the rear of the rear door window, to give the appearance that this is a 2-door vehicle, and not a 4 door. The C-HR easily accommodates a baby seat or two in the rear, with easy access through the rear doors.

The C-HR will be produced in both Turkey and Japan. U.S. and European vehicles will be produced in Turkey (don’t tell Trump! Ed.), while Japan will supply the Japanese market and Australia. Toyota expects to sell 30,000 C-HRs here in the States in 2017, even though the car will not be available in dealerships until after the 17th of April. In 2018 they expect to double those sales numbers to 60,000 units here in the U.S. Fuel economy is 27 City/31 Highway, and 29 Combined mpg. The smallish Toyota uses regular fuel, 87 Octane or higher, unleaded. Pricing is very competitive, with a starting MSRP of $22,500, plus a $960 destination fee in the standard model. An XLE Premium version is also available, at $24,350 plus destination.

We drove the C-HR out to a local winery, Flat Creek Estate, near Marble Falls. Sadly (but predictably) we were not able to taste any wine while we were there, although a bottle of Flat Creek Estate 2012 Syrah magically appeared – via UPS – a few days later.

So what did we think? Our first thought was that the drive was too short. At just 50 miles in each direction, we arrived an hour early for lunch…on a two hour drive, and that included getting lost at one point. Same with the return trip, except we didn’t get lost, even though we took a different route back. We did drive an interesting variety of roads, including many curvy sections, some straight highway, some freeway, and even some construction zones. The C-HR did a masterful job of transporting us comfortably between points A and B. The CVT, like many CVTs, was not our favorite, especially if you wanted to put your right foot into it. But on a typical drive, one that most people will complete on a daily basis, this is a very competent vehicle. And let’s face it, most people who choose this car for their primary vehicle are not looking for a sports car disguised as a CUV. The C-HR CVT does have a sport mode, though, in case sport driving your C-HR becomes just irresistible – at some point.

Our bottom line: Think of the C-HR as a modern version of the Toyota Matrix, albeit one that uses the latest electronics and more safety features than ever.

Will the M Street crowd (Millennials) go for it? That, of course, remains to be seen. There are lots of cars out there designed for one segment of the driving population, only to find their true calling in another. But if Toyota can capture the millennial segment now, there’s a good chance they can hold onto them as they (attempt to) mature. And that’s important to Toyota’s bottom line.