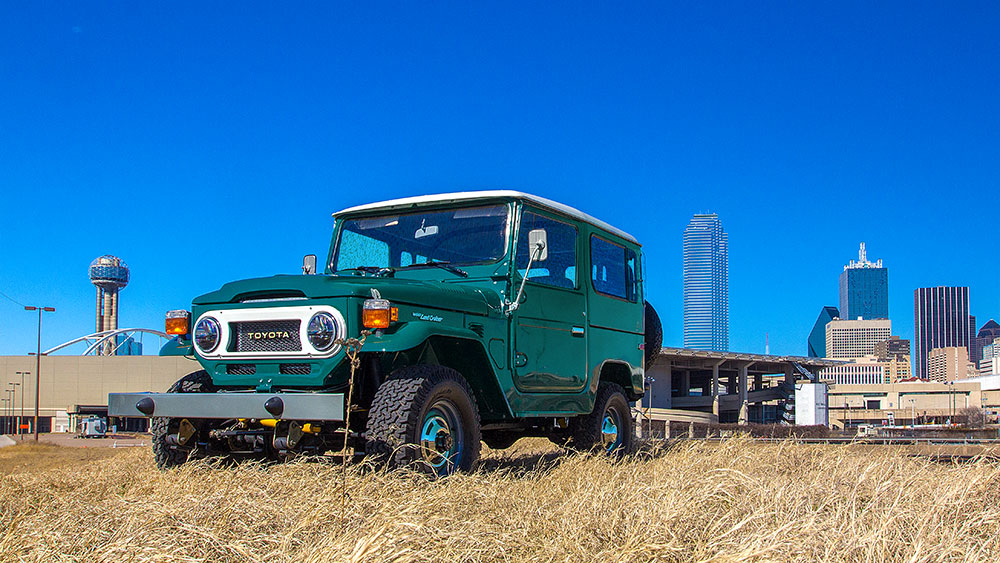 As this is written, we’re but a couple of weeks removed from Toyota’s debut of an off-road concept at the New York Auto Show. That Toyota is once again contemplating a continuation of its off-road paradigm (the FJ Cruiser departed the U.S. market in 2014) speaks to the ongoing interest in the off-road/adventure category, as well as the almost inborn affection thousands of enthusiasts have for Toyota’s venerable FJ40. We weren’t slow to recognize it, and neither was the Miami-based FJ Company, which has opened a sales outlet in Dallas.

Within its temporary location on Maple Avenue, the FJ Company’s general manager, Joey Pomerenke, outlines for prospects the process by which they can take delivery of what is essentially a remanufactured FJ Toyota. The company, in the business for five years, has what sounds like the perfect business model: Source old FJs in Columbia, where the Toyota 4X4 remains a reliable go-to vehicle for almost anything, on road or off. Have the requisite number of craftsmen (and 50,000 square feet) to disassemble, restore and reassemble the FJ, and implement a stateside sales channel (or two) to get the rebuilt Toyotas into the hands of monied enthusiasts. And thankfully, at least for my ability to process this, ‘monied’ needn’t be the 1/10 of 1%; at roughly $55K to start, Bernie Sanders can afford one.

In a walkaround provided by Joey, we had a chance to examine a FJ restored roughly four years ago. Back from an off-road get-together in Central Texas, the FJ had just the right amount of dirt and dust to seem incredibly credible. The dark green exterior and black interior looked perfect for getting the FJ muddy…and then keeping it that way; the FJ has the patina – if you will – of a genuine tool. And just as women get more interesting with age (you’ll have to trust me…), so does a 40-year old Toyota approaching its fifth decade.

The FJ Company’s remanufacturing process isn’t rocket science, but they have a demonstrated capability of dismantling the rocket, replacing and/or rebuilding everything in need of replacing or rebuilding, and then reassembling those pieces into a mechanism you could drive or take anywhere. And in ‘Classic’ form, we’ll assure you it doesn’t drive like a rocket; this is a basic, carbureted powerplant with no pretense at anything beyond getting you out there…and getting you back.

To the FJ Company’s credit, even the most basic FJ is upgraded to ARB’s Old Man Emu suspension, supplying a tad more ground clearance and considerably improved composure. Front disc brakes bring the slow pace to a halt, and the addition of power steering should provide a semblance of – well, you know – steering, something original-spec FJs delivered only at a standstill.

Of course, given the low volume and personal approach of the FJ Company, you can budget for virtually any budget. No mention of gold plating, ostrich seating or V12 swaps, but within the three additional categories beyond ‘Classic’, the Company’s California, Sport and/or Custom should meet any perceived need this side of Trump Tower. Modifications start with the swap from a 4-speed to 5-speed manual and escalates from there. And while more power sounds absolutely wonderful (what’s not to like?), it’s worth remembering that this is essentially a Kennedy-era platform. And while you won’t confront – unless you want to – the top on/top off dilemma of JFK’s Secret Service, neither do you want your FJ impounded because you were maintaining an absolutely stupid speed.

You can – we’ll admit – buy one heckuva lot of Jeep Wrangler for the $50K-plus the FJ Company is asking for their Toyota. But when you do spend that money on the Wrangler, you’ll have invested in a depreciating asset. Jeeps don’t depreciate much, and a Wrangler doesn’t depreciate quickly, but that doesn’t change one irrevocable fact: when the Jeep dealer sells yours they’ll get another. And another. There is a finite number of classic FJ Toyotas cruising the land, and eventually they’ll all be either rebuilt or scrapped.

If comparing your $55,000 outlay to the cost of doing an actual restoration independent of the FJ Company, know that the frustration of assembling the parts, talent and process is probably a six figure job. Time is money, and Joey’s team – in saving you time – is also, in all probability, saving you money. A bunch of money.

For more info on the product, process and where you can see one, visit the FJ Company’s website at www.fj.co. Or call Mr Pomerenke at the office – 214.550.2853. Somewhere in their production cycle the FJ Company has one with your name on it.

The Rides and Reads of March
May 19th is National Bike to Work Day. Ride this.
Event Calendar