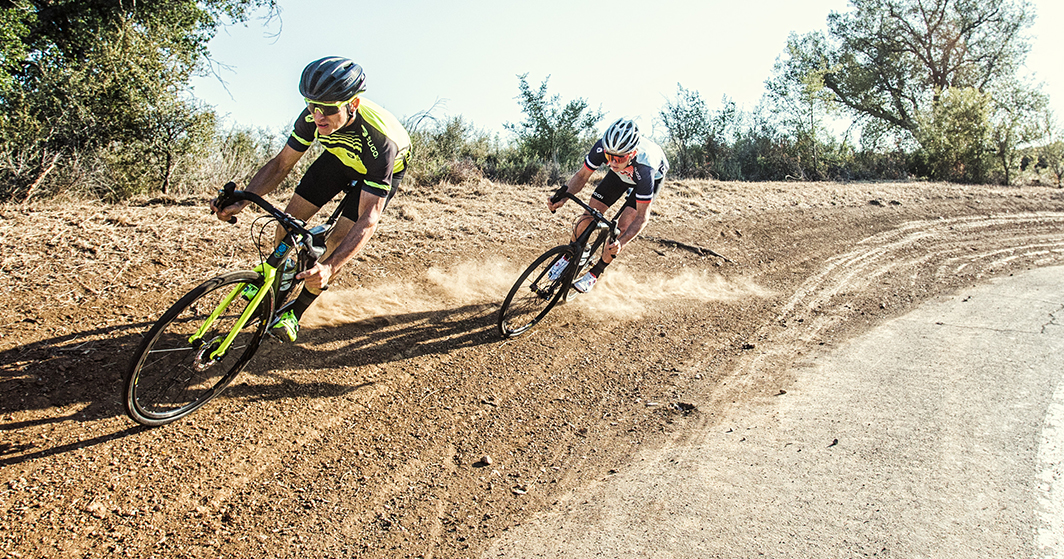 If you’re reading this somewhere near the Katy Trail and consider owning a bike or bikes, you have a multitude of options. You could, of course, opt for a road bike, with drop bars, a ridiculously low weight, and a performance expectation that demands you ride 300 miles a week. At the other end of the spectrum is the cruiser, which will prove awesome for chasing beers and, with the requisite pedaling, might even elude hangovers. The kicker, of course, is that Point A to Point B takes longer than a Congressional look into private e-mail servers.

Thankfully, for those inclined to – occasionally – ride fast and occasionally chase a beer, the product team at GT Bicycles is building a complete lineup of Grade ‘Enduroad’ bikes. And if that brings to mind GT doing an ‘end run’ around conventional concepts of what a road bike with drop bars might be, well…so be it.

Our test bike, supplied by GT, is an astute take on being most things to most people. In profile, if you can forget the Kawasaki green forks and live with the hipster-centric matte gray finish, the GT Grade – in any of its iterations – exudes a ‘let’s get going’ attitude, without the intimidation that often comes when contemplating the single-purpose road bike or, at the other end of the cycling spectrum, a take-no-prisoners mountain weapon. And while the Grade’s user-friendly personality might remind you of the folks’ CR-V, know that once on board, with your butt on the Fizik saddle and hands comfortably positioned on the tops or hoods, the responsiveness is unlike any CR-V I’ve ever driven – and my folks had four of ‘em.

A bike’s responsiveness is typically a function of the bike’s footprint, weight and geometry. If that geometry is too aggressive handling can be abrupt, while if too slack the bike will feel lazy. The GT Grade’s layout felt just right; whether on the tops or drops the rider enjoys enough agility to stay awake, but not so much as to see a spike in blood pressure or heart rate. That, in combination with the relatively light weight of a carbon fiber frame, results in an active engagement with the bike and – notably – not a jump-on-and-forget-about-it ride experience.

That ride experience is enhanced further by the ride quality often – but not always – found in a carbon fiber frame. As a recreational rider most often found on a steel bike (the newest of which is nine years old), the transition to carbon fiber is akin to swapping your in-the-last-century 911 for one twenty years newer. There is a true ‘magic carpet’ feel to the weave GT has woven into its carbon fiber specifications, and while we wish – visually – the bike’s downtube wasn’t quite so swollen, the overall impression is one of complete competence. We’re not sure if all of this adds up to ‘sexy’, but time in the saddle will do beautiful things for your self-esteem.

Of course, in that the GT Grade is postured as a gravel-accessible all-rounder, time was given to gravel. And not finding any on the Katy Trail (it’s been years!), we spent time on the C&O Canal trail near Washington, D.C. This path parallels both the Potomac and the C&O Canal, and consists of both a thin gravel coating (I’ll guess you’d call it hard pack) and, where the gravel is washed out, a dirt/clay mix. The GT Grade handled both surfaces beautifully, with enough directional stability to feel secure, and having enough bite to keep moving forward.

As you’d guess, GT’s Grade isn’t the only bike in a bike shop with a chance at giving you a quality riding and ownership experience, nor do you have to pay the Carbon Fiber 105’s $2,600 price to have a good time on the trail. The Grade begins – with aluminum alloy frames and down-market Shimano components – at around $1,500. The bike that started this conversation, Cannondale’s Slate, offers an alloy frame and Cannondale’s ‘Lefty’ fork for just over (or under, depending on spec) $3,000.

On other showrooms, like those of Bicycles, Inc., Specialized offers several different ways of spending similar money, including the Diverge Comp and Roubaix Comp. None reinvent the wheel; all are attractive options for less money than you’ll spend on your next car’s infotainment.

National Bike to Work Day is a small part of a growing awareness that for trips – especially short trips – you don’t have to use a car. And with fewer cars on the road there’s more room for your GT Grade – or whatever might be hanging in your garage or apartment.