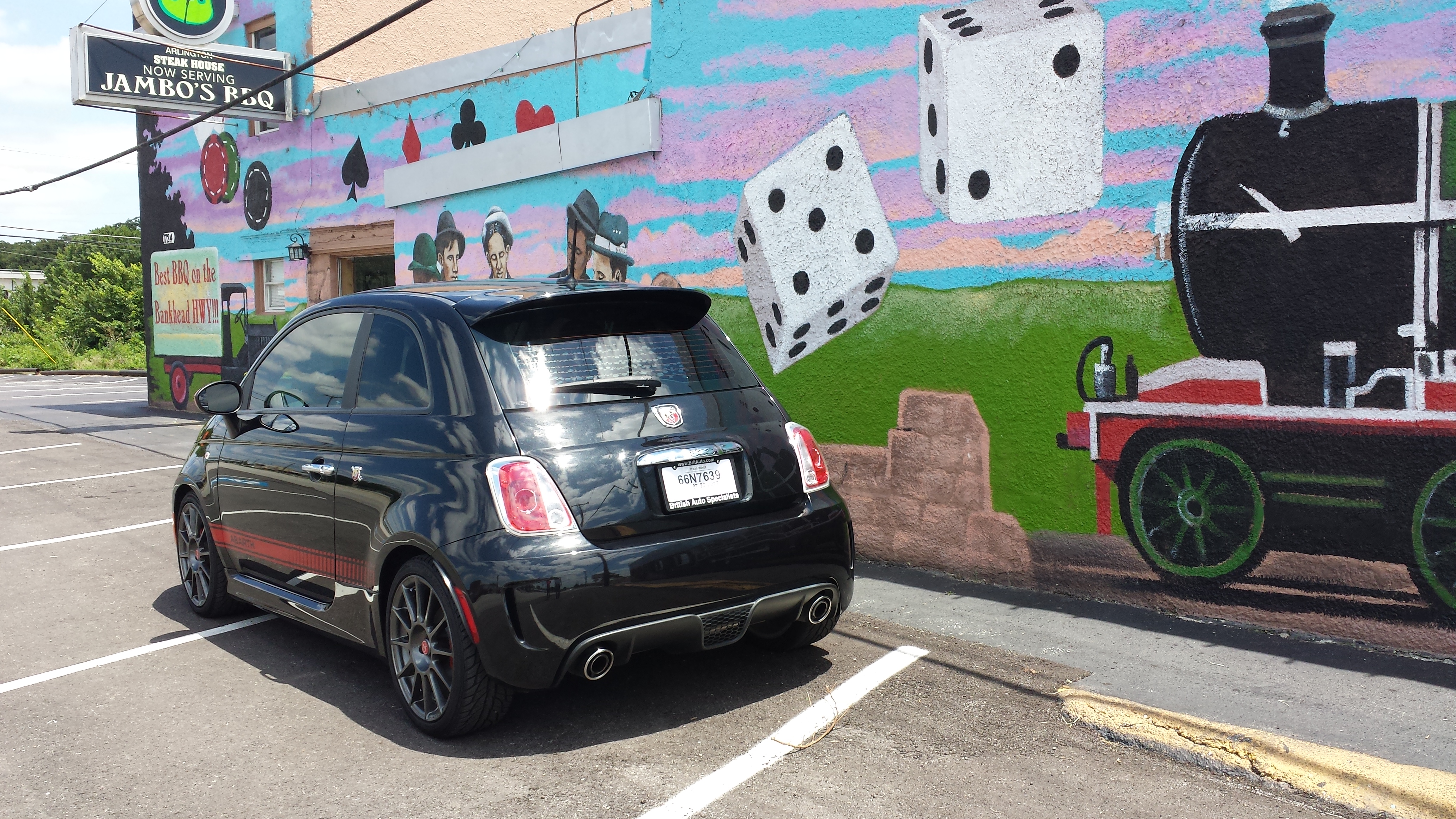 In 2003 we recruited a Cadillac De Ville to provide comfortable taxi service for elderly parents. Now, after 14 years, Old Squeaky is on its second engine and the windows and seats have developed memory issues. It was time for a change, so we contacted Tonys Auto Removal to sell the car for the best price and decided to look at a one-owner FIAT Abarth, offered at the local Chevy dealership. While we waited for a salesman who could drive a stick, I remembered commuting in my Alfa Romeo Milano Verde years ago, when the highways were not so crowded. It was great fun, except for the time I watched a driveline donut flying away in my rear view mirror. With today’s congestion I wasn’t sure about driving a stick again on a daily basis.

The Abarth was surprisingly roomy inside. Muscle memory kicked in, the gears shifted easily and I took off to the snarl of the Abarth exhaust. What a hoot! The salesman gripped the seat and shouted “I love the way you drive!” – but I could barely hear him over the exhaust. When it was Richard’s turn I handed over the keys and tried to stop grinning. Could I drive this car daily? You bet! Let others focus on Facebook while sitting in silent blobs of metal, plastic and rubber. Driving with a stick is what I think of as ‘mindful’ driving. 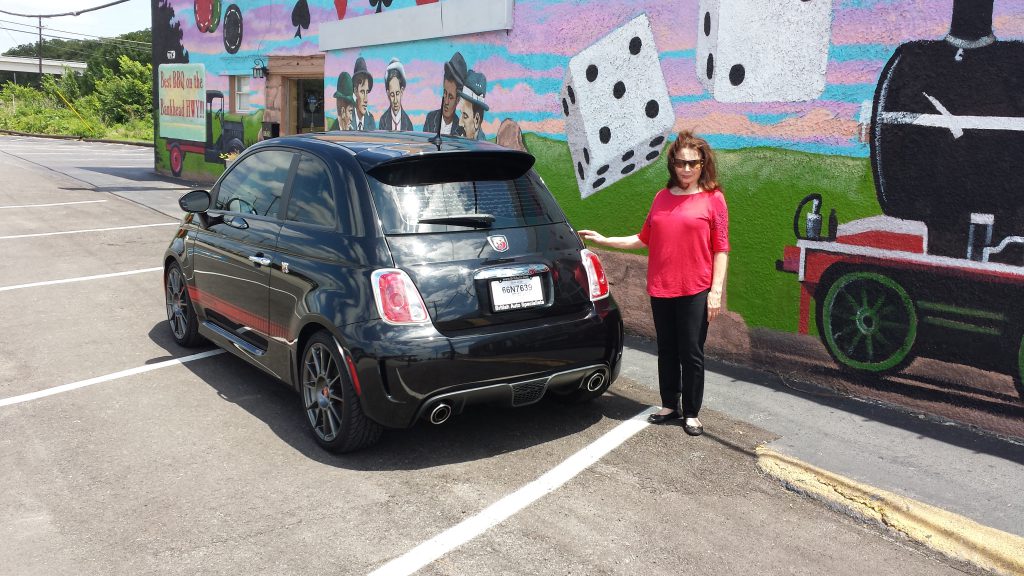 With the salesman back in the showroom, and with Richard at the wheel, we began our journey to Josephine (Texas) to have the car inspected by trusted Fiat owner/mechanic/racer Robert Rodgers. The trip was an epic adventure worthy of Homer. As Richard maneuvered the little car through crowds of big rigs, we could hardly see through the driving rain. And then a warning light grabbed our attention. We parked and nervously flipped through the owner’s guide. The warning light indicated the computer was not happy with the car’s running lights. Then, what appeared to be smoke began rising from the front of the car, but a call to the FIAT guru was comforting enough (the ‘smoke’ was steam from air vents that were filled by the downpour) that we proceeded on. Our last challenge was walking the 17-inch wheels (with tires that appeared to be painted on) over some worn-out railroad tracks. After a very thorough check, Robert deemed the car worthy of purchase.

Getting to know the car’s shift patterns has been a revelation. My first Alfa was a 2.5 liter and geared low, so I bought tires that were worth more than the car and happily left a trail of burned rubber. My 3.0 Milano Verde is geared taller and is a great lurk-and-leap car on the highway. I expected the Abarth to be more like the 2.5, but when we tested the shift-up display we were shocked at how long we waited to be told to go to the next gear. The Abarth loves to sail rather quietly in 5th on a good highway – think roadtrip! But you won’t fall asleep driving it. In spite of the token back seat, It is still a sports car (Jay Leno deemed it the future of sports cars). If you don’t like the snarky in-your-ear exhaust, the physical demands of shifting (such as they are) and a suspension constructed for g-force cornering, then an Abarth is not for you.

It is often said you cannot drive an Abarth without smiling. You also cannot drive it on the highway without morphing into the Stig. You begin to clutch the wheel a little tighter, and your eyes narrow as you peer through the red mist. You mutter to the Camaro in the next lane “come on sucker.” And ask your passenger “see any cops?”

The Abarth has 77,000 miles. The previous owner ordered it with many options. He lucked out because they ran out of 2012 Abarths while orders were still coming in. The Detroit News reported in June of 2012 that demand for the 2012’s outstripped the build capacity in the Toluca, Mexico plant. Chrysler had already tripled production, but they were overwhelmed with orders. Some think marketing was a factor, including the Seduction ad with the Italian-speaking Romanian supermodel, depicted as the human incarnation of the car. And who are we to argue? We believe the original list price was $23,000, but most dealers – at that time – added a premium. We paid $8750.

From where I sit: The importance of design
2017 Jeep Compass Trailhawk Video Review
Event Calendar