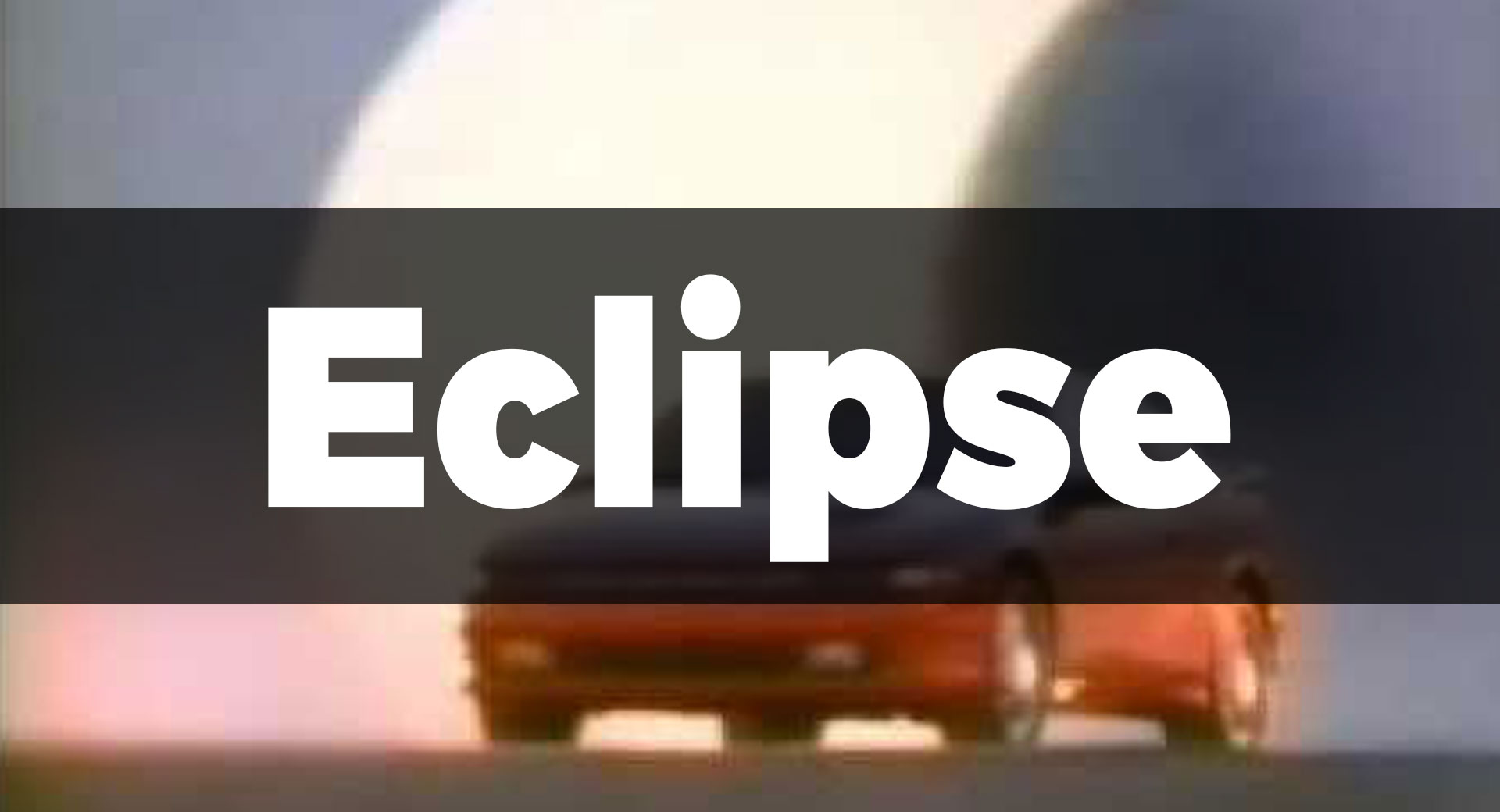 By Adam Moore and Jesus Garcia

Yeah, we know…with everyone hyping Monday’s eclipse, we’re posting our memories – if we had ‘em – of Mitsubishi’s long-running (and long dormant) Eclipse coupe and convertible. As a car company Mitsu is a shadow of its former self. At one time the company was dominant at the Paris-Dakar off-road rally, and fully competitive in the U.S. sales race with Toyota, Nissan and Honda. Obviously, it didn’t lead that sales race, but it was in the sales race. Today, the only ‘sport’ in Mitsubishi is its Outlander Sport, and we’re not sure appropriating ‘Eclipse’ with a new crossover is the magic Mitsu so desperately needs. But that is now, and we’ve asked both Adam Moore and Jesse Garcia to discuss ‘when’. Adam begins the conversation, while Jesse says his goodbye. David Boldt

My personal experience with the Mitsubishi Eclipse requires a bit of a back story, starting in high school. I’m a 16-year-old and ready to get my first ride. Being a 16-year-old, I wanted something cool and fast but didn’t have cool or fast money. Two of my uncles at the time ran their own used car lot. By owning a used car lot, I mean they used to go to automotive auctions every week and buy junky cars to sell in their grass field. Luckily for me, I could go to the auction with them. I was lucky because one, it exposed me to that industry and two, allowed me to buy a 1988 Honda Civic Hatchback (for $300) as my first car.

This car didn’t last long, as the radiator was shot and I didn’t have any money to fix it. I did pay an absurdly low price for it, though, so after patching the radiator I was able to sell it for $600 – doubling my money. Now with a little more cash on hand, I went back to the auctions with my uncle in search of a cooler, faster ride. What I went away with was probably one of my favorite cars I’ve owned in my life. I bought a 1988 Acura Integra Special. This was both fun and quite cool. Now this was all pre-Fast and the Furious days, so owning a small Japanese car with 1.6-liters under the hood and hardly any horsepower wasn’t cool for my friends at school, but I loved driving that thing. I drove it throughout my senior year in high school and my freshmen year in college.

Then it was time to trade up once again. I was in college and had a job where I’d been able to save a bit more money and was ready for something newer. Unfortunately, I was in college and had a job so was too busy to go back to the auction myself with my uncles. So, I gave them some specific instructions on what to look for, and how much I wanted to spend. This is where my Eclipse experience began. My instructions: I want a coupe, I want a manual and I like the color black. They met all of those standards, buying for me a 1994 Mitsubishi Eclipse black coupe with a manual transmission.

I drove the Eclipse for a few years, but not without fault. One year when heading back home for Christmas I was cruising down 377 toward Granbury and my engine blew. After phoning my dad with my newly purchased (and lifesaving) Nokia brick phone I was rescued. Now, instead of enjoying my Christmas break from school I was stuck in Granbury. My father and I towed the Eclipse back to my grandfather’s shop and started looking at my options.

We ended up buying a crate motor and we’re going to use my grandfather’s shop to swap the engine ourselves. Now my dad knows a thing or two about cars, but he’s not a mechanic – and at that time I basically knew nothing mechanical about cars. So we received the engine a week later, it’s now New Years and once again I’m in Granbury at my grandfather’s shop trying to bring my car back to life. We swap the engine in two days and amazingly enough, it all worked out. We did it! I had my Eclipse again and yeah, I was excited…

Of course, that’s not the end of my Eclipse experience. About six months later the engine blew on me again. This time I was on I-635 driving through Garland. I once again called my dad (who lived nearby) and we towed the car to his house. This time I wasn’t too keen on fixing this bastard, but my dad wasn’t ready for me to walk away from a car we both invested time and money into. We called the company where we purchased the crate motor from, as it had a year warranty. They told us that since we didn’t have a certified technician install the engine we needed to pull the engine, ship it back to them, and they would decide if it was their fault or ours. That was a deal we weren’t going for.

At this point, I started driving my grandfather’s old F-150 to get me from A-to-B and we towed the dead Eclipse to my grandmother’s house till we could figure out what to do with it. After a few years of sitting there, we decided to just donate it to get it out of our hair. I’ve never looked back and never longed for another one like I have the Integra.
Adam Moore

When’s the Last Time You Saw a Mitsubishi Eclipse on the Street?

Car people love a good pun. With that, Mitsubishi is even announcing the new Eclipse, because digital marketing can’t get any easier than that. The Mitsubishi Eclipse I remember is the same one most people in my age group think of: A lime green Eclipse with shiny rims and Paul Walker’s voice saying “I almost had you” echoing in the back of our minds.

I was nine years old when the first Fast ‘n Furious hit theaters in 2001. By the time the third movie, Tokyo Drift, was released in 2006 I was a freshman in high school and cars had become more than Hot Wheels on the family rug. I may have trouble remembering names of classmates or what they looked like, but I have photographic memories of the school parking lot. If you were a known car person you had a choice between three different classes: Pickups, muscle cars, or tuner imports. It wasn’t a gang war, but you did have to pick a side during debates in the school cafeteria.

I drove a V8 pickup and grew up loving traditional hot rods, so I was a fan of American muscle. Half of my friends belonged to the tuner crowd driving Honda Civics, Mazda RX7’s, and Mitsubishi Eclipses and Lancers. This was during the time when the term “ricer” started being thrown around like a racial slur at any foreign car with neon lights and a badly-fitted body kit.

It was a weird era in car culture, our reinterpretation of the street freaks and trends of the 70’s. Instead of candy paint jobs, towering intakes, and jacked up rear ends we slammed our cars to the ground, fitted spoilers that could make an F1 car jealous, and made sure the stereo was loud enough to shake teeth fillings.

Now, I’m older and I’ve learned to appreciate all cars. All the tuners I used to see on the streets on weekend nights are gone now. I can’t remember the last time I saw a Mitsubishi Eclipse, let alone a set of neon lights under a Honda Civic. They’ve all been replaced with the FRS/86 and BRZ. Those are better cars, to be sure, but (perhaps) not as involving.