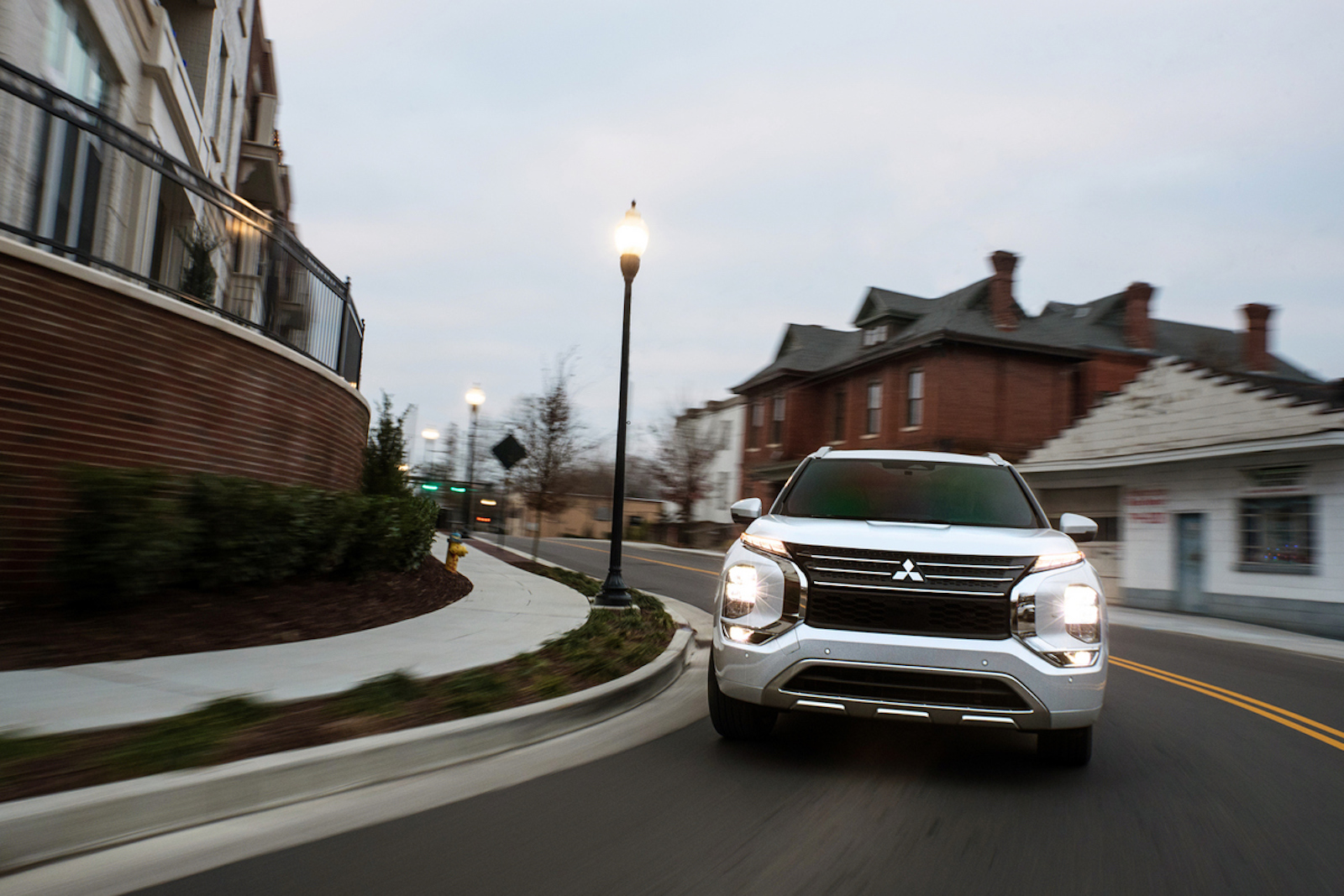 An automotive life isn’t easy if, like Japan’s Mitsubishi, you spend that life ending in a vowel. It began with the U.S. departure of Isuzu, and roughly a decade ago the trauma continued with the exit of Suzuki’s automotive lineup. Although Mitsubishi continues to hang on in these United States, most car buyers would have assumed it, too, was gone. And if not gone, largely forgotten. Happily (which ends in a ‘y’), the folks at Mitsubishi have plans for their dealers and customers, and have relocated just down the road from Nissan’s HQ in Franklin, Tennessee to better execute those plans. What is arguably the first fruit of those plans – and this relatively new alliance with Nissan – is Mitsu’s new Outlander, a compact crossover with an oversized complement of surprises and delights.

In the walkup to the new Outlander, I was impressed by its almost European outline. It’s not Audi, BMW or Mercedes, but looks more closely related to those showrooms than to those of Acura, Infiniti or Lexus. It is, in just a few words, upscale in profile and from the rear. The visuals only get disconcerting when viewing the front fascia from, well…the front. There, you see Mitsubishi’s design team attempting to craft a brand identity from scratch, a look that speaks to neither Mitsubishi’s past (as I can recall), nor – I’ll hope – to the carmaker’s future. This isn’t, by any means, a deal killer, but you’ll want to consider it while sitting in a well-lit space and not – you know – from your couch. In your pajamas.

Open the door in the top drawer SEL trim and you’ll find a 3-row interior draped in what Mitsubishi’s simply labels ‘black’. But with saddle accents, tasteful brightwork and high-quality touchpoints, the Outlander cabin punches well above its weight (it was recognized by Wards in that outlet’s 10 Best Interiors judging) in both style and substance. There’s almost nothing I disliked about its environment; from the clean and clear instrumentation to the intuitive nature of its infotainment screen, the Outlander’s interior impresses as an in-the-park homerun. Add the third row, which – we’ll admit – is tightly configured, but is very unusual in the compact crossover category, and will come in handy when young families – or grandparents! – go on the road with kids.

On that road, you’ll find a ride-and-handling balance that is definitely serene, almost sublime. For those of you growing up with Mitsubishi’s Evo or, to a lesser extent, Mitsu’s Eclipse, this ain’t your dad’s Mitsubishi. Rather, it’s a mature evolution of the compact crossover, jam-packed with refinement while keeping a lid firmly on any visceral aspirations. And therein, for this reviewer, is the rub.

Under the hood, and responsible for propelling a curb weight – unladen – of almost 3,900 pounds, is a normally aspirated inline-four of 2.5 liters producing 181 horsepower (@ 6,000 rpm) and an identical 181 lb-ft of torque at a more promising 3,600 rpm. Putting that power to the ground is a CVT, which does its job with reasonable efficiency but without any vestige of excitement. I’ll admit it: the competition doesn’t provide much in the way of excitement, but something responsive would be a great way of setting the Outlander apart, and far more useful – day-in and day-out – than the third row.

With price points beginning at $26,000, lower trim levels make for a compelling value argument. Move up to our test SEL with what Mitsubishi calls its S-AWC (for Super-All Wheel Control), and you have control for most – if not all – driving situations. Mitsubishi explains: “The three elements of S-AWC are front-rear driving force distribution, left-right wheel torque distribution, and four-wheel brake distribution. The S-AWC controls them as a whole, instead of switching them individually according to each situation. The S-AWC continuously captures accelerating, cornering and braking, and creates control values while considering all the effects on the vehicle, such as responsiveness to the drivers’ maneuvering, traction performance, and running performance.” Got that? I do, and believe the all-wheel-drive option is well worth the $1800 bump.

At an as-tested price of $38K, the Outlander’s window sticker can generate a lot of internal debate when cross-shopping the major players, as you can buy a lot of RAV4 or CR-V for that same check. For me, the intriguing aspect of import ownership is the way it differentiates you from the motoring mainstream. At this moment there are few better ways to be different in a segment that seemingly everyone is in, and everyone is driving. It’s going rogue…in Mitsubishi’s Outlander.