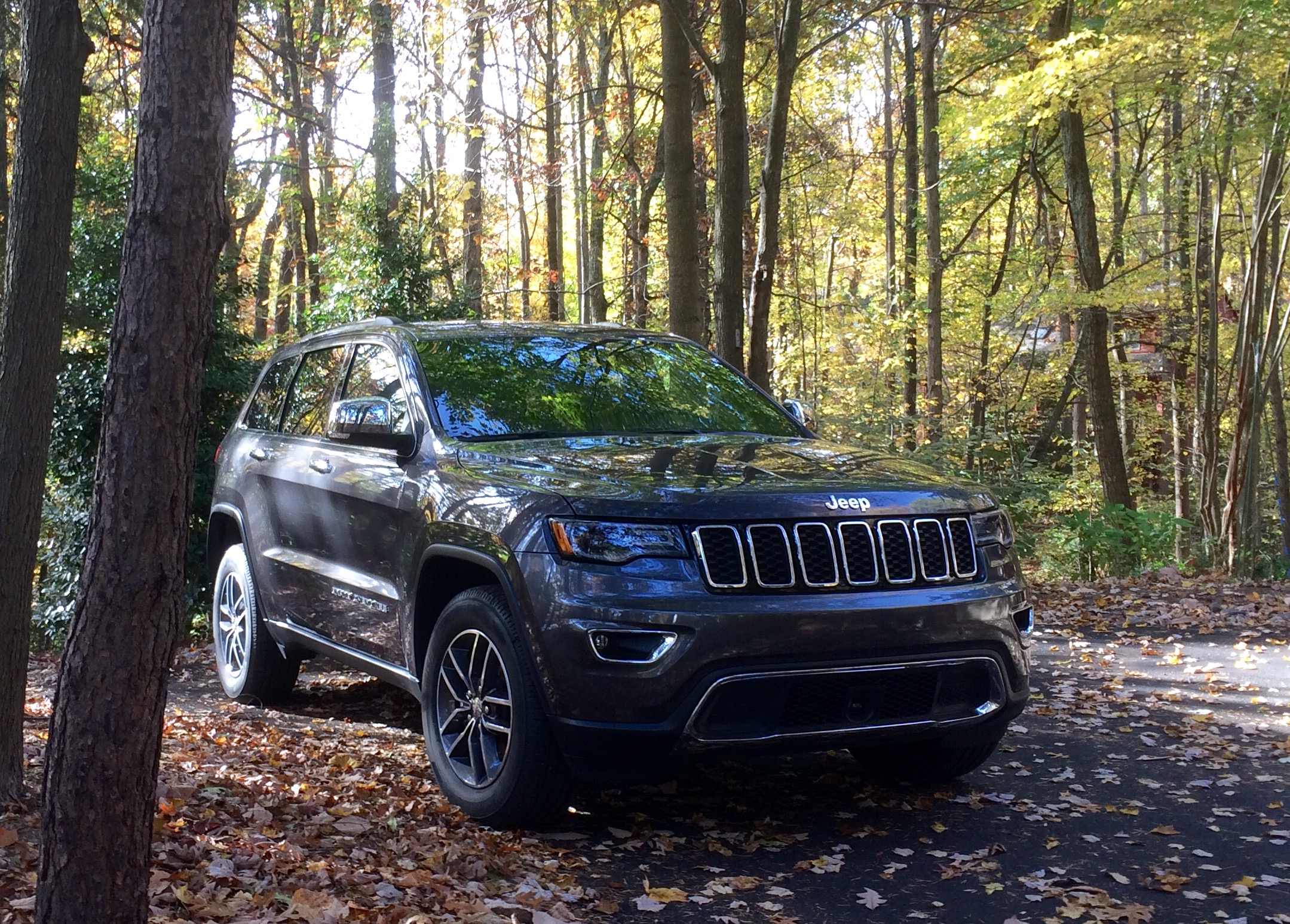 This fall marks the 25th anniversary of Jeep’s now-ubiquitous Grand Cherokee, first introduced at the ’92 Detroit Auto Show, in showrooms for the ’93 model year. And how time flies; the only thing we seemingly have in common with 1992 is, via the Harvey Weinstein allegations, an updated edition of Bill Clinton and his gal pal, Gennifer Flowers; Weinstein, of course has no gal pals – he only thinks he does. But if the 1st- gen Grand Cherokee entered the U.S. market with a bang, some twenty-five years later it’s Katy-bar-the-door, as the Grand Cherokee remains relevant for many thousands of consumers each year.

Our test vehicle, a hard-loaded Grand Cherokee Limited, hits what we think is the sweet spot in the GC lineup, with more standard and available amenities than the base Laredo, while lacking the stratospheric reach – both in equipment and price – of the Summit or Jeep’s performance-oriented Trackhawk. Dip, however, into the Jeep’s optional equipment, and a base of $40K can quickly become $50,000. That was the case with our test Jeep, which came with Preferred Package 23H (Luxury Group II), adding $4,300, while ‘active safety’ represented an upcharge of $1,500. Throw in Uconnect 8.4 NAV and Blind Spot/Cross Path detection, and you quickly have a $48K Grand Cherokee.

Notably, that half-a-hundred doesn’t include Chrysler’s iconic Hemi V8; instead, our Limited came with the base 3.6 liter Pentastar V6. And while it does a lot with its 220 cubic inches, it ain’t – and never will be – a Hemi.

Outside looking in, we remain impressed by both the Grand Cherokee’s shape and, in the context of 2017, its basic footprint. While swollen relative to our ’98 ZJ, which was the last model year of the first Grand Cherokee, its overall dimensions are in line with our family’s 2006 GC. The wheelbase, however, is stretched, and the live rear axle of the ’06 is replaced by an independent rear suspension. That independent rear not only provides a more car-like road dynamic, but affords more rear seat room and cargo area. If the Jeep product team were so inclined, we could imagine a smallish 3rd row in back, but for that FCA has Dodge’s Durango and – down the road – a grander Grand Cherokee.

The best news as you contemplate today’s Grand Cherokee: In its sixth model year of production FCA has done nothing to screw it up. The front fascia has been modestly modified and lighting has been revised, but the overall look hasn’t been tampered with. We liked it from the git-go, and continue to regard it as the right-sized platform for those wanting big rig room in combination with some semblance of off-road capability.

Inside, the leather-covered seats comfortably accommodate both substantial backsides and (thankfully) their substantial wallets, while rear seat legroom actually provides leg room! Instrumentation is both informative and legible, with the Luxury Group II supplying – on top of roughly 20-some optional adds – an instrument cluster with off-road display pages. We didn’t try off-road, but did enjoy the package’s perforated leather front seats, which are both heated and ventilated.

What makes a Jeep a ‘Jeep’ is, of course, its all-wheel drive capability. And while that runs counter to those owners piloting front-wheel drive Renegades and Cherokees, we’re standing by the observation. Our test Grand Cherokee, equipped with Jeep’s Quadra-Trac II 4WD system, supplies the astute pilot with the console-mounted Selec-Terrain system. Regardless of what terrain you find yourself on, whether by design or inadvertently, that little knob will probably get you out of harm’s way. And if it doesn’t, you can always dial BR-549; operators are standing by.

If we had one disconnect in our short time with the Grand Cherokee, it was with its 3.6 liter V6. While offering a generous 295 horsepower and delivering a combined EPA estimate of 21 miles per gallon, it simply didn’t deliver the surplus of power or refinement provided by FCA’s Hemi V8. For those keeping their Jeeps at low altitude, or towing little beyond a couple of dirt bikes or Jet Skis, the V6 will do fine. But if you’re truly inclined to go high or go long, we’d check the V8 box or opt for FCA’s V6 diesel. Both options cost more (the diesel is a lot more!), but both will pay off in long-term utility.

A replacement for the current Grand Cherokee is waiting in the wings, but with FCA’s all-but-constipated launch schedule, when that happens is anyone’s guess. In the interim, today’s Grand Cherokee is relatively affordable, eminently practical and – with that – increasingly ubiquitous.