In a scenario that might have been concocted by Quentin Tarantino, a U.S. distributor, representing an Indian manufacturer of a storied British brand, chose the area in and around Midlothian, Texas for the launch of its all-new, dual-purpose motorcycle. The bike, Royal Enfield’s Himalayan, was the focus of both a press (read contributor Alan Pease’s take on the intro here) and dealer intro, with Midlothian’s Courtyard by Marriott serving as the launch headquarters. A charter jet to the Himalayas would – we’ll guess – have been too costly…even for Tarantino.

As a launch venue, North Texas provided a central location and, at the off-road demonstration area supplied by the TexPlex, riders enjoyed a chance to examine the Himalayan’s off-road chops. The Himalayan is one of several small, dual-purpose bikes in U.S. showrooms…or about to be in U.S. showrooms. Honda’s CB500X is at the top end of the category, boasting a 500cc twin and enough ground clearance to leave the pavement, while Kawasaki’s Versys-X 300 and BMW’s G310 GS offer (ostensibly) more dirt capability and – given their smaller displacements – less comfort when going down a paved road.

All of the above competition supply an established nameplate in the U.S., while Royal Enfield is, among the great unwashed, essentially unknown. But with annual sales of millions in its home market, Royal Enfield’s parent has the cash flow to underwrite a new U.S. distributor, fresh models and new engineering. The Himalayan is among the first of those new models, but it won’t be the last. For more info and (perhaps) a demo ride, the team at European Cycle Sports in Plano will be – as of mid-April – ready and waiting. 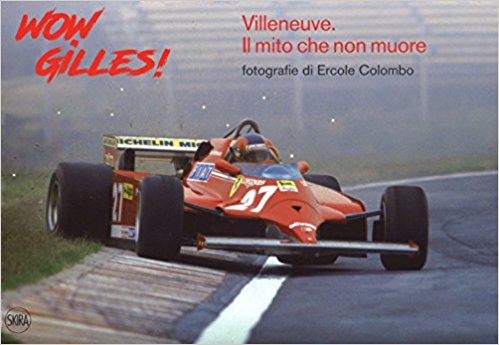 If following Formula One this year and looking for something to thumb through as the race coverage goes to commercial, we’d suggest the recently released WOW GILLES! Villeneuve. The Undying Legend as a chance to relive the glory that was both Villeneuve and Ferrari in the late ‘70s and early ‘80s.

The book is more photographic essay than biographical narrative, but within the limited text you get a real feel for Villeneuve’s talent, passion and compassion. Like so many in racing, the brightest lights are often extinguished early; Gilles Villeneuve was killed during a qualifying session in May, 1982. His name – however – lives on, both in the success of his son Jacques in Formula One, as well as the circuit bearing Gilles’ name in Montreal.

And finally, this: I’ve been wondering – for most of the last year – about Cycle World magazine and its monthly format. With recent issues running but 70 pages, the reduced size doesn’t allow much room for either enlightening edit or the enrichment – for the publisher – of advertising. As of this spring I can stop wondering, as Cycle World has relaunched in a richer, bigger quarterly format and schedule. Issue #1 boasts Ducati’s new Panigale V4 on the cover, a beautiful pictorial history of the AJS Porcupine inside, as well as photo-rich overviews of both the Baja Peninsula and Death Valley.

Of course, if tapping into print but once every three months is too much of a wait, CycleWorld.com can still supply you with a daily fix, as can a host of Internet-only sources. Our initial impression of CW’s content, layout and quality is positive, while wishing they could have gone bimonthly and given us six – rather than four – issues a year. And while we’re wishing, I might have also hoped for a cover price of under $10, rather than the $11.99 as CW relaunches.

This retreat for a print pub comes at an interesting time for the motorcycle industry. In the U.S. motorcycle manufacturers are still attempting to rebound from the recession, and the OEMs seem to be stumbling forward with that rebound. Kawasaki is seemingly the most aggressive in reconstructing its lineup, Yamaha and Honda have a pulse, and just about everyone wonders when Suzuki might get started. In Europe Triumph has momentum, BMW is building momentum and Ducati – with its aforementioned V4 – works aggressively to regain momentum.

If the Cycle World photos of the Panigale V4 are an indication, Ducati’s rebound is just around the (high speed) corner.

Shopping for a loved one?
Book it.
Gripes? Yeah, with the TAWA Awards we’ve got gripes
Event Calendar