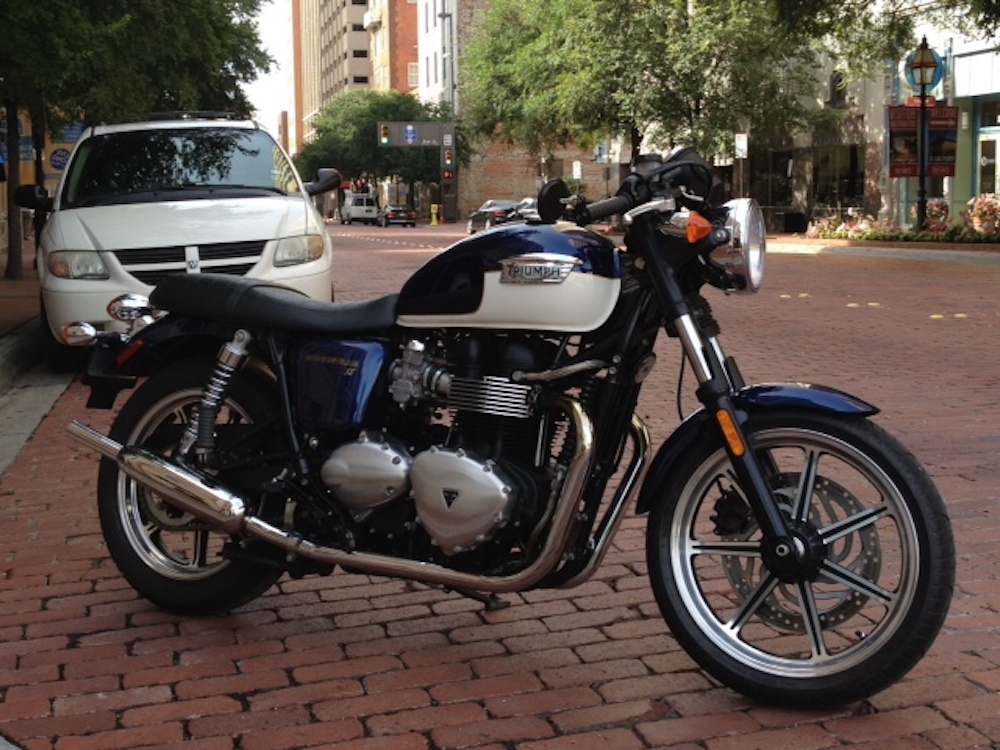 The Super Bowl is behind us, spring training hasn’t tossed its first pitch, and the Indy 500 is still three months away. The good news – especially if you’re in a one-on-one relationship with yourself – is that Valentine’s Day is right around the corner. And while knowing d*mn well you’re not lacking for ideas when considering a gift for self-giving (no one knows you like you know you), the folks at Quarto Publishing continue to come up with ideas that resonate across a broad demographic. But then, that’s what they’re paid to do…

On the txGarage bookshelf today is Triumph Motorcycles in America, written by authors Lindsay Brooke and David Gaylin. And in that I own a Triumph motorcycle, and I own it in America, the title seemed as if it was almost written for me and me alone. But it wasn’t. Instead, it was written for all of those paying attention over the last 60+ years as Triumph owners, enthusiasts and/or enthusiastic owners. And rather than simply assembling a bunch of pics from the company archives, Brooke and Gaylin take a detailed look at the company, its bikes, the competition and – of course – what was going on in America during the time period the book covers.

When surveying the history of American’s postwar import car scene, much was made of veterans taking a look at MGs, (later) Triumphs and Healeys, falling in love and either bringing them back from Europe or buying ‘em once back in the States. The same thing happened – albeit to a lesser extent – with bikes. For a population schooled on Harleys and Indians, the smaller, more responsive platforms offered by BSA, Ariel and – yes – Triumph were an absolute revelation. And while prior to World War II there had been intermittent attempts to market import bikes to American audiences, the prescription didn’t take until after the war and – of course – the economic boom that followed.

Triumph was helped in no small way by compelling design, competitive performance and – not to be discounted – a retail network a step (or three) above the competition. In Texas, tuner Jack Wilson – owner of Big D Cycles – put Triumph on the map, and while other owners may not have had Jack’s tuning chops, they had showrooms, a commitment to service and reliable sourcing of parts.

Triumph also benefited from celebrity; McQueen rode one, Romero raced one and Bob Dylan (infamously) crashed one. In the book today’s Triumph doesn’t, of course, get the ink enjoyed by the bike maker’s earlier history, but it’s there. And – of course – today’s bikes are on your nearest showroom. Visit Quartoknows.com/books for more information on this book…or many others.

After reading, if you occasionally need a ‘time out’, look no further than your Indian showroom, where – in addition to Scouts and Chiefs – Swiss watchmaker Baume and Mercier has created two new timepieces, the Clifton Club Scout and Clifton Club Chief. While there is, for this observer, an inherent disconnect between America’s Indian and a Swiss timepiece (didn’t Native Americans use the sun?), you can’t argue with the aesthetics of either watch. And with both selling for under $4K, you can probably roll either purchase into your bike loan.

Indian joins a slew of OEMs, both four-wheelers and two-wheelers, with branded watches. Bentley and Breitling have been joined at the wrist seemingly forever, and Ferrari was part of the boutique timepiece initiative some thirty years ago. In an increasingly digital world the time for a wristwatch may be up…so act now!