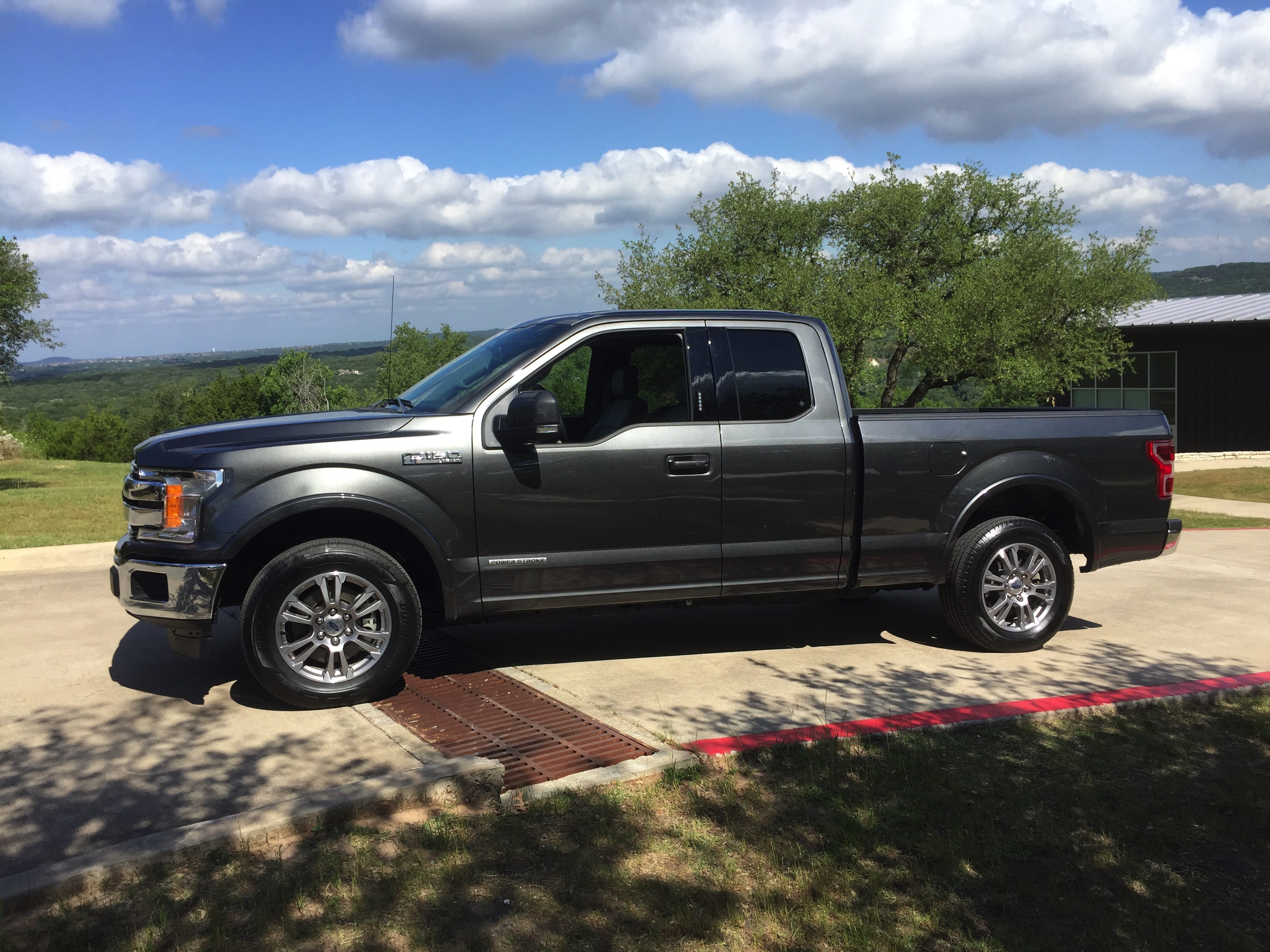 The new Ford F-150 Diesel SuperCab was parked in my driveway when I got home last week. Two Ford contractors dropped off the keys, handed me some paperwork to sign, and then quickly escaped in a wild looking, bright orange Mustang GT sitting across the street, engine running and driver’s window down. It – the Mustang – was just like the getaway car in the bank robbery scene in “Dirty Harry”.

I felt at home in this latest F-150 as soon as I jumped in and moved it down my driveway. Yes, that quickly. Because there’s just nothing like a pickup truck. Nothing. Pickup trucks haul people and haul cargo, and this one – it turns out – hauls ass. Beautiful, inside and out. It smelled new. It looked new. It shouted “Drive Me!” so that ’s what I did.

I’ve often said “the Car of Texas is a Truck”. It’s what we drive here. In many cases, it’s WHY we drive here. Its why we don’t ride the bus or take the train or even carpool as much as we probably should. We love our trucks because we can haul the kids, the friends, the Family, the pets, the camping gear, the new sofa, the antique stove, the old flooring, the dry cleaning and the drywall, plus pick up the groceries and all the miscellany you can think of – or can’t think of. But haul it anyway! Not to mention pulling a boat or a trailer, and hauling a couple motorcycles as well. Off to the lake, the beach or the mountains we go. Or out to the desert. Best of all, the modern pickup truck can be as luxurious inside as any sedan or SUV. 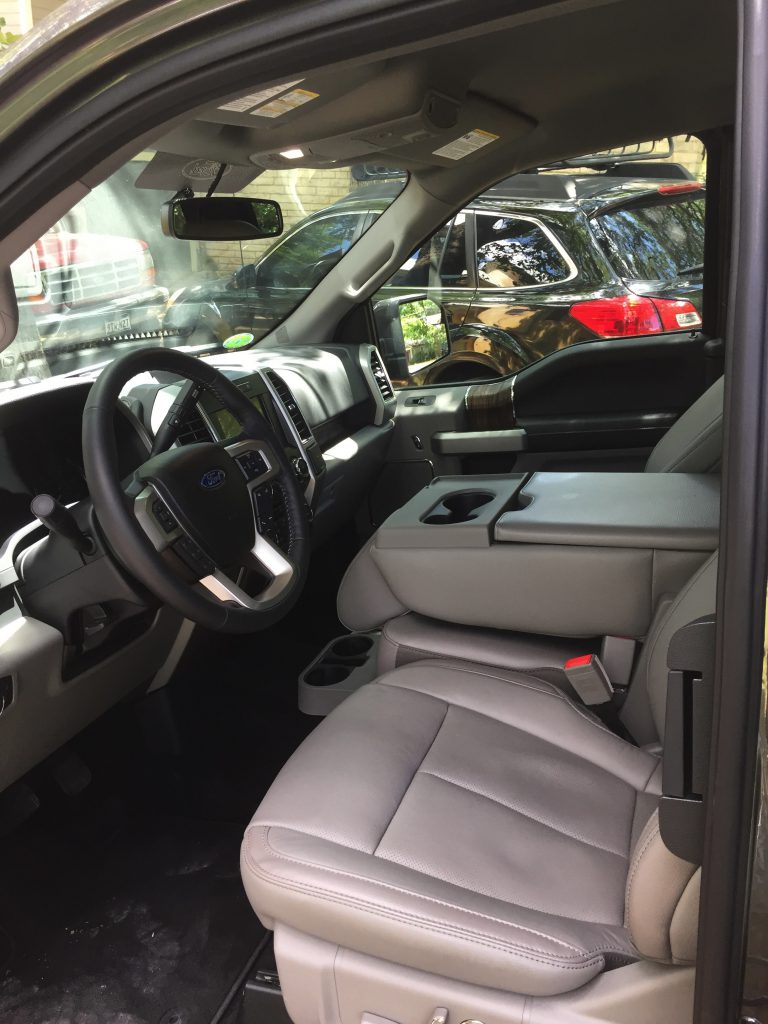 The view from the front seat of the new F-150 is commanding – there’s no other word for it. You sit high above traffic and watch the world go by. It’s one more reason we prefer trucks to cars here. Normally, I power about town in a Subaru Outback, a 2011 model with a 6-speed manual transmission and a bike rack on the roof. The manual makes the Outback a blast to drive, even on errands. But the F150 makes it just as easy to run the same errands, or toss your mountain bike into the cargo bed and head for the trails.

Pickup trucks are built for lots of things, but one thing specifically they’re built for is dogs. Dogs and pickup trucks go together like peanut butter and jelly, like french fries and ketchup, like, well…dogs and pickup trucks. So, I opened the SuperCab’s forward facing rear door, folded up the rear seats, threw down a heavy towel on the floor, and without even a command my dog knew what to do: jump in and make himself at home.

On the road, I quickly realized the new F-150 is not as intuitive as some vehicles I’ve driven. But intuition only goes so far these days, as more and more “features”, safety and otherwise, are added. And this truck is loaded with features. So, you’re probably either going to have to get the owner’s manual out and read it, or Google the question(s) of the moment. I chose Google.

In quick order I found the release for the underhood latch, and I learned that you can’t open the electronic tailgate – much as you might want to when you have that load of grocery bags in your arms – unless you unlock all the doors first. Also, the release for the center console to drop down and convert the front seating from three to two is on the passenger side, for some reason. I. Love. Google.

Everything else you’ll want to know is likely contained somewhere in the electronic information display. So, I determined it would be easiest to just sit there in a parking lot, like the one at my local Costco, and play with everything until I figured it all out. Which actually didn’t take very long.

Pretty quickly I had mastered the radio and the information settings, and I had switched the language settings to display information in Spanish instead of English, measure quantities in liters and kilometers instead of gallons and miles, and show the temperature in Celsius instead of Fahrenheit. Estupendo!

My recent 10-day trip to Mexico City, hustling around in Uber cars and city buses, suggested that – for me – Spanish is best learned in an immersive environment. Fortunately, in today’s world, that’s pretty easy to accomplish electronically. Press a couple buttons on the touch screen and you’re in another culture. Buen Trabajo, Dearborn! Muchas gracias!

I have driven or owned a number of Ford vehicles. I’ve ‘Raptored’ across the open desert near Borrego Springs, California, and ‘Transited’ from Austin to New Orleans. I’ve even ‘Focused’ around the world-class race track that is COTA. I once F150’d my way through the Texas Hill Country, ending up in the darkest dance hall I’ve ever experienced – at lunchtime, no less – in Gruene, Texas. I currently own a 1997 Ford F250HD Diesel 4×4 ClubCab pickup, with a 5-speed manual transmission. I had a 2001 Mustang Cobra for 10 years, and a 1990 Ford Taurus SHO. So I’m no stranger to Fords.

Given that I had this F-150 Diesel for only a week, I decided at the end of the first day that I would to park my Subaru Outback, and see how this truck adjusted to life in the city on a daily basis. And how I adjusted to it. The city can be a challenge for every vehicle. Driving. Parking. Loading and Unloading.

But the F150 was up to the challenge. By the end of the fourth day I was ready to use it for everything I used the Subaru for. And more, of course. I drove it around town and out onto the highway, as they call it in Texas. In this case, Interstate 35. Up and down the Capital of Texas Highway, ferrying supplies to and from Costco, REI, and the feed store. Then out to the Austin City Off-road Motorcycle Park.

I raced up the job-stopping steep grade on FM 2222 between 360 and 620, passing everything in sight while going 85 to 90mph, with no loss of power at all. I drove it down and around the curviest roads we have here surrounding the lakes, out beyond 620, and then I quickly scooted back into Austin’s downtown streets. I even sat “parked” on MoPac one afternoon, stuck in rush hour traffic like a true Austinite, for nearly an hour. The new F-150 Diesel passed every test I gave it, smoothly and securely.

But in the traffic downtown, where on-street parking can be a challenge and bus and bicycle lanes narrow the available traffic lanes, the F-150 shows its size. It’s big. And it feels bigger yet. Ditto Austin’s millennial playground, The Domain. Traffic is a nightmare there, and larger vehicles like the F-150, as well as other pickups and SUVs, are hardly nimble getting around.

In the Outback, I’m used to shifting gears constantly. But the 10-speed automatic in the F150 did that for me, while I sat back in the supple leather seating and enjoyed an air-conditioned, superbly quiet interior. When I wanted a manual override, it was there. This truck will crawl when you want it to…or need it to crawl.

The engine cutoff, designed to conserve fuel, saved fuel where it was supposed to, stopped at traffic lights or sitting parked in MoPac traffic. It snapped back to life when I released the foot brake or when it needed to insure I was cool enough. (No small concern in country where the afternoon commute is already in the 90-degree range – and it’s only the beginning of May). Finally, I squired the truck – and my elegantly attired girlfriend – to dinner at The County Line BBQ. A truck for all seasons and for all reasons, including a date night in Texas!

But there’s always nits and picks…the console phone rest for your smart phone acts like a launching pad if you hit the brakes. Don’t put your phone there. Trust me!

THE DOG wants a bigger back seat floor area to get comfortable. That was clear on the first day. The rear seats in the SuperCab fold up nicely but they leave something to be desired when it comes to floor space and larger dogs. It gets tight in there. So personally, I’d probably opt for the Crew Cab version over the SuperCab. I like a little more room in the back myself. As does my dog.

THE BOYS loved climbing into and out of the box, tailgate up or tailgate down. That’s their world. They’re 9 and 14. Add Pickup Trucks and boys go together to the above list of go-togethers. 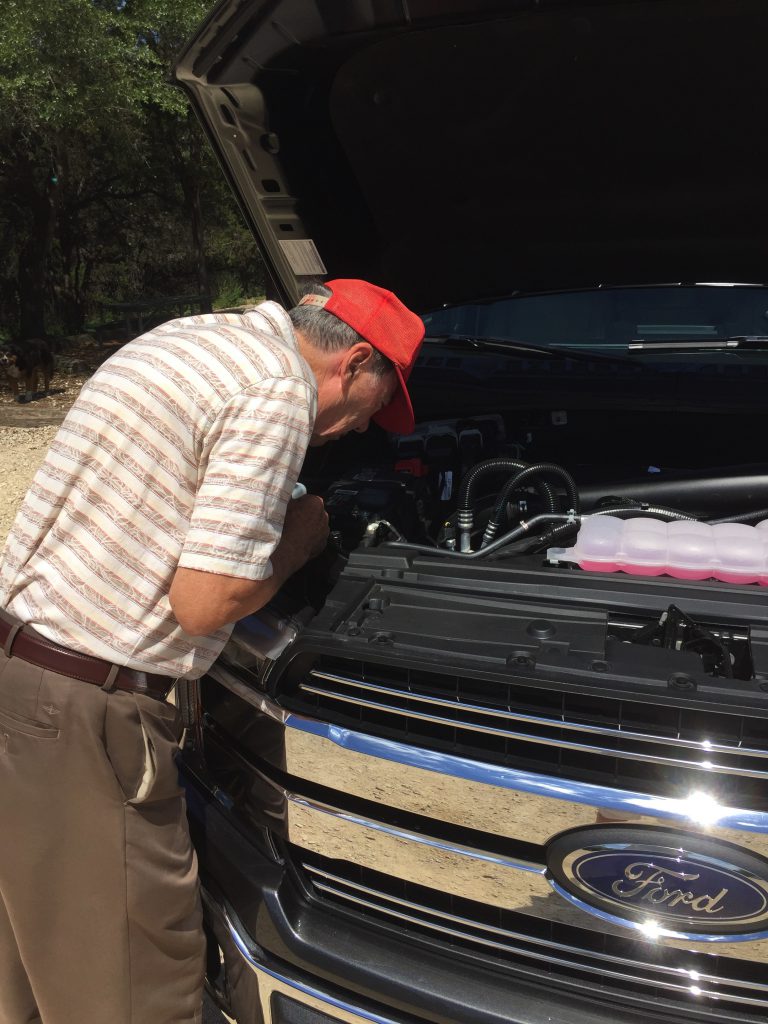 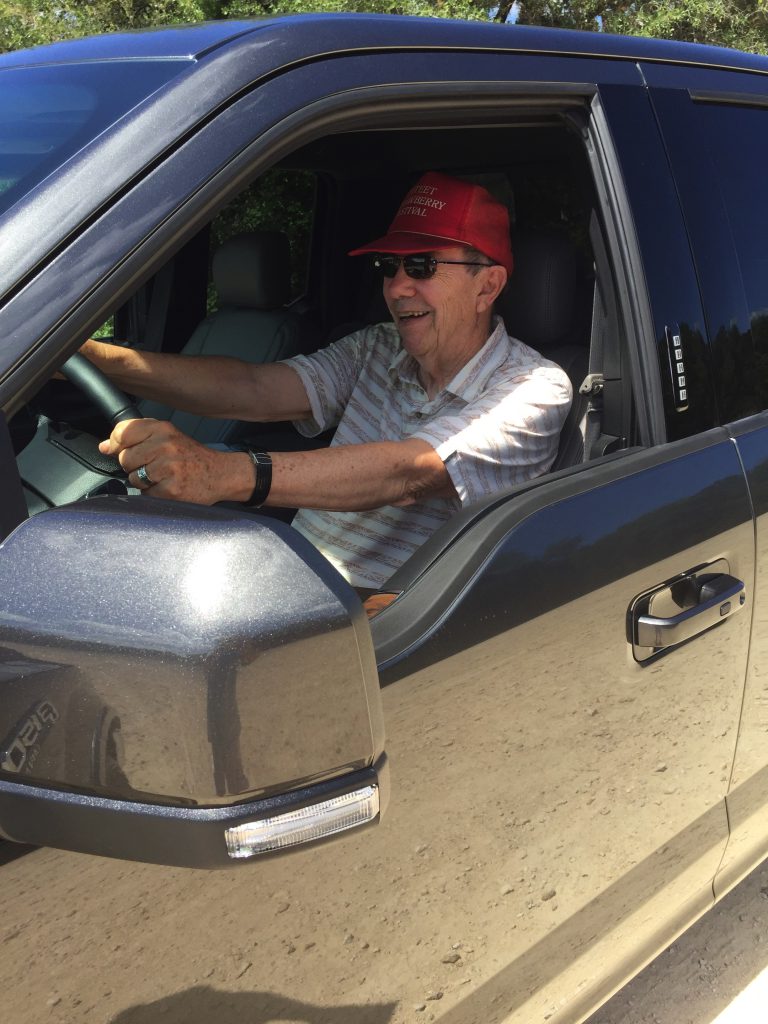 Last but not least, we called upon a guy who grew up around Fords, Leroy Haverlah. He drove them. Worked on them. He experienced cars and trucks when the local small town dealer was a garage on Main Street, Texas. I’ll let him tell you his impressions himself. (Note: Leroy drives a Toyota ClubCab, the most popular midsize pickup in America today.)

Thanks for the demo, Alan. Ford was in our family business so long I used the “F” in Ford as I was learning script. We drove the Model A for years and everything else as a family, and at the garage we drove and fixed Ford trucks and Ford tractors, a wrecker, and even school buses. This pickup should more than satisfy anyone interested in a ½-ton pickup.

I’m wondering if the 10-speed transmission is an especially good fit for the high torque diesel. On the road the truck kept a pretty low RPM level, at all speeds. The engine cutoff during stops is appealing to me for a truck, where drivers often idle while loading/unloading.

Luxury comes to mind with the perforated seat covers, front and back. I can imagine the ease this power train would handle the full trailer rating, or the bed being full. I think it is a good idea to have the coated bed, as this one did, on any truck to protect the bed.

The ride – with the excellent choice of tires – is really quiet, and I doubt many people walking up to this vehicle would notice it is a diesel. The engine compartment is neat. It seems swept back which would protect a driver from front end crashes, and it puts the heavy engine weight back over the wheels for better handling. I was surprised to see that three adults can easily sit up front.

A step rail for the doors is likely a first add-on a buyer would consider. The fuel mileage seems very good, and I bet with loads it won’t go down as much as with a gasoline powertrain.

Good luck, Ford. I hope this model gets the attention it deserves. It should serve owners and their descendants for a long time with a minimum of maintenance. – Leroy

In the end, I’d certainly consider adding this new diesel pckup to my fleet, if I were in the market for a new pickup. It would complement the Subaru nicely, haul the motorcycles easily, as well as the bicycles and the Vespa. What more could you ask for? 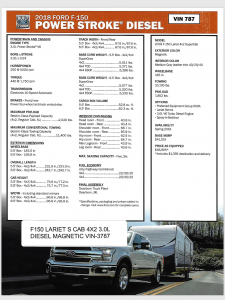