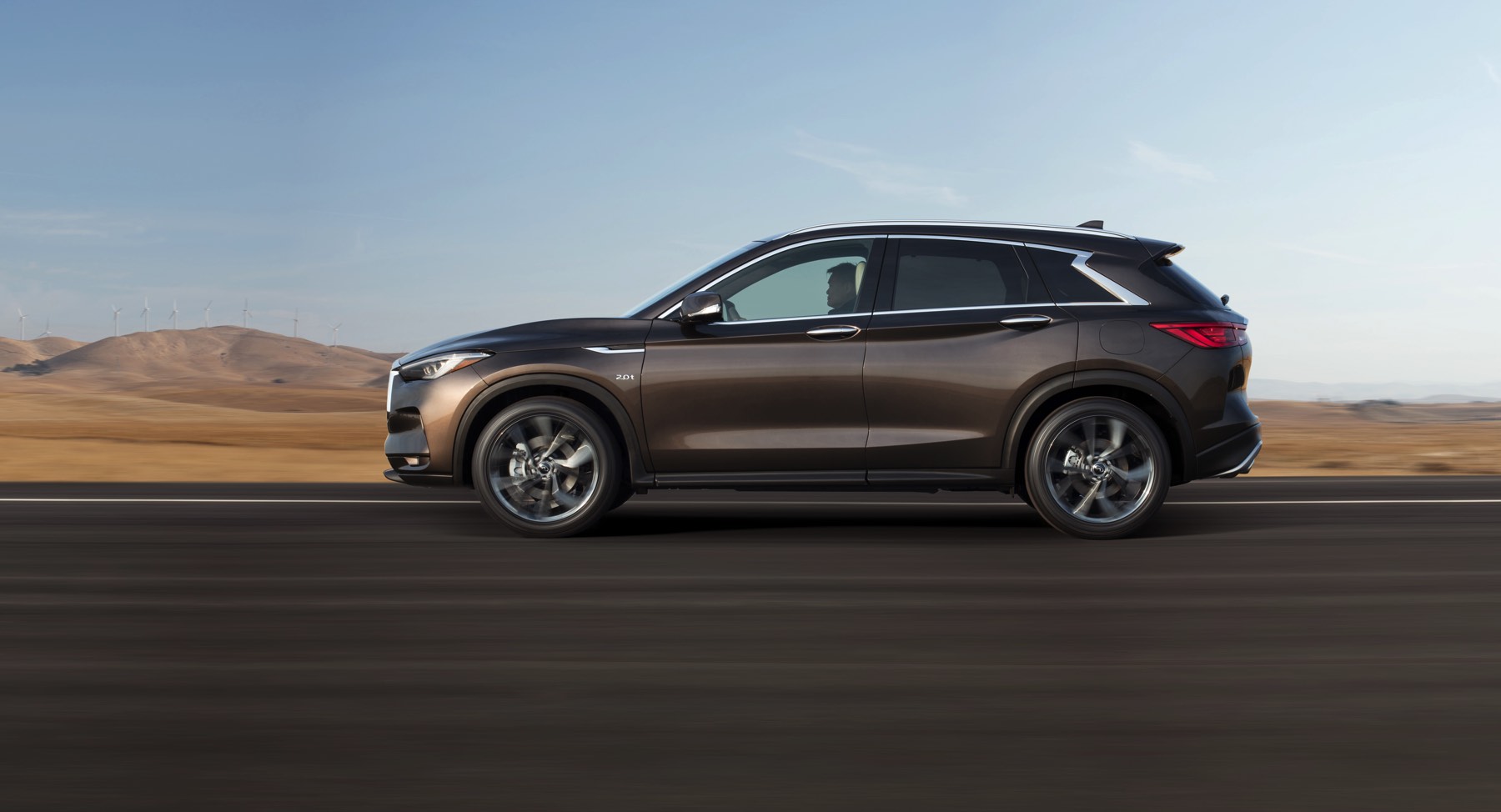 Let’s get this out of the way at the top: My sister-in-law (we’ll call her ‘Kay’), likes Infiniti’s QX50. And to channel Farmers Insurance, she knows a thing or two because she’s seen a thing or two. Whether behind the wheel of a Lexus sedan, Mercedes SL or Toyota’s venerable – and now expensive – Land Cruiser, Kay knows what she likes, and Infiniti’s new crossover had her (to now channel Renee Zellweger) at ‘hello’.

We’ll admit it: there’s a lot to like in Infiniti’s new 2-row crossover. While wearing the same model name as the previous QX50 (which began its product cycle as the EX35…long, long ago, in a land that now seems far, far away), that rear-wheel drive/all-wheel drive QX50, with its almost GT-like ambience, has morphed into a front-wheel drive/all-wheel-drive platform that better fits America’s perception of a midsize crossover.

Fans of ‘bigger is better’ will be pleased by the new QX, as it’s bigger. While the last-gen QX50 was almost athletic in its footprint, this new QX is both wider and taller. It’s not an outlier in the midsize segment, but suggests a breadth of capability based – in large part – on its physical breadth. We like its organic sheetmetal, while thinking that the athleticism of the earlier QX50 has been replaced by the fading athleticism of an aging athlete. But you’re not considering this Infiniti for track days. For most buyers, it will be the carpool lane, office parking lot and trying to find a spot at the shopping mall. And for that, the new Infiniti’s platform is almost perfect.

Inside the new QX50, our senses were overwhelmed by our test Infiniti’s Autograph package. Here, you and your companions are seated on – and in – white quilted semi-aniline leather seats, the headliner is constructed of brown Ultrasuede, and the entire ‘living room’ is framed by Natural Maple Wood accents. It is quite a show, and one of which Mrs. Trump would fully approve; that’s if, of course, she cared. The kicker, and we’ll touch on this again later: to obtain the Autograph package you’d need to secure the Sensory package, and that – as you’d guess – requires the ProASSIST package. At the end of the day you’ve elevated a QX50 starting solidly in the $40s to something just under $60K.

If there’s a defense for spending BMW, Mercedes or Porsche money in an Infiniti showroom, it may be under the hood. There, Nissan’s engineering team has installed what they describe as the ‘biggest revolution in the internal combustion engine’ since, like, the invention of internal combustion. As Infiniti’s marketing people tell it, a multi-link system ‘flexes’ to lower the compression ratio when more power is needed, while raising the compression ratio to secure better fuel efficiency. It’s a little like having two powertrains under the one hood. Behind the wheel, you’ll enjoy an extra reserve of power for merging or passing, along with the relaxed revs for pleasurable touring. And suddenly, with just a moderate touch of the throttle, this aging athlete is Washington running back Adrian Peterson.

Behind the Infiniti’s wheel you’ll find decent visibility in most directions, although the view to your rear is more than a little tunnel-like. But then, you have a rearview camera and any number of nanny-assists. The steering is quick and braking assured, and if you’ve selected the ‘Sport’ driving mode the QX50 is – as mentioned – surprisingly athletic in its on-road behavior, although on Dallas’ pock-marked streets it’s also slightly harsh. For most of your time – and that of your family’s time – ‘Standard’ mode seems about right, where the responses aren’t significantly dumbed down while the ride comfort is subtly dialed up.

At the end of a week we came away impressed – although not awed – by what Infiniti’s team has presented. Its QX50 is solidly constructed, well-engineered and beautifully appointed. But…as equipped it’s also sixty thousand dollars, money that would go a long way in the aforementioned BMW or Benz showrooms. If thinking QX50, keep your investment under $50K, or move on to a more established automotive bauble.