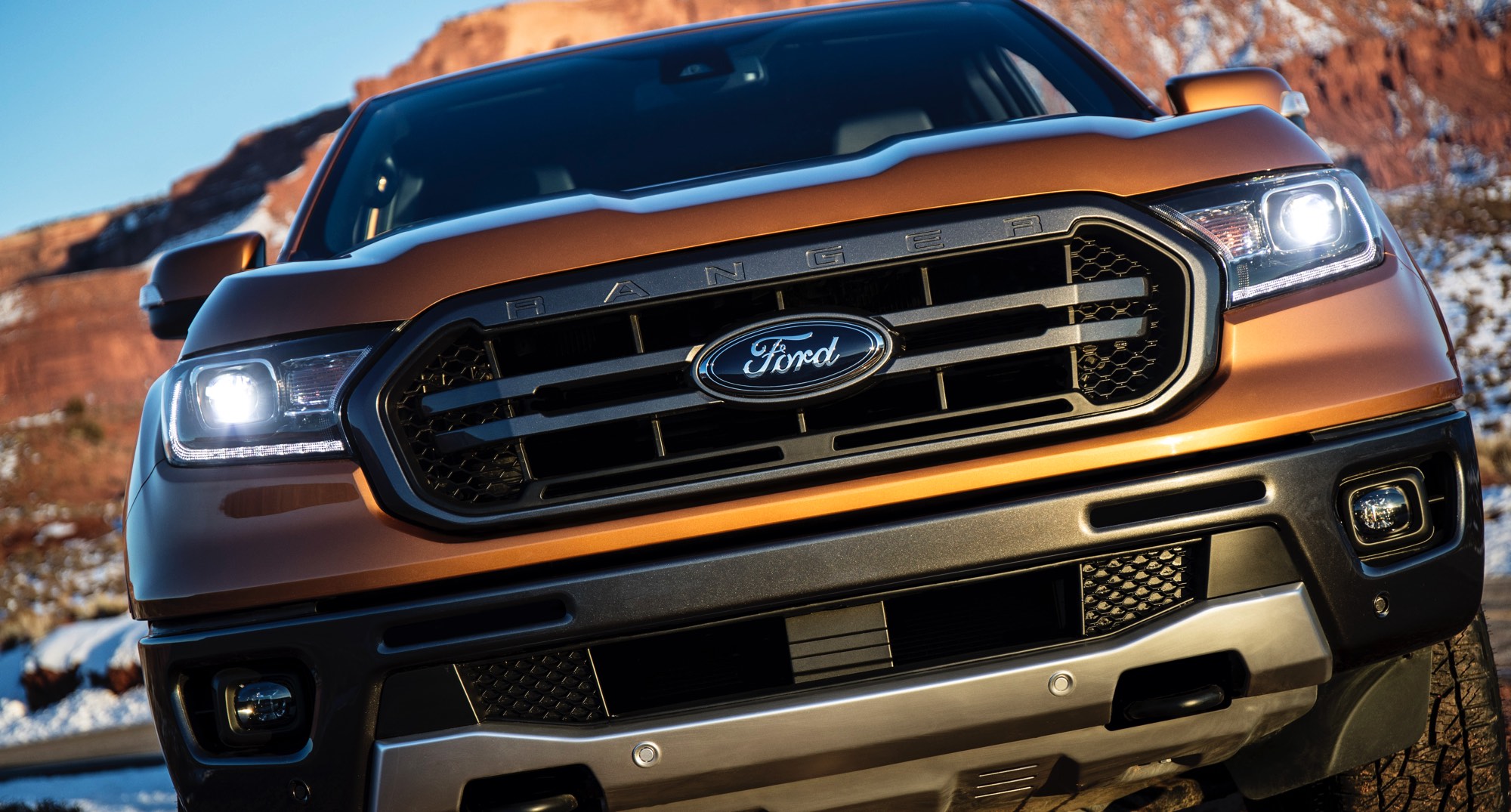 Ford has been driving the all-new 2019 Ford Ranger across the country, allowing both journalists and potential buyers – often at regional auto shows – a chance to test drive it. They are not treating the Ranger like a trailer queen, either; they are using them to tow trailers cross-country to each event. At the San Antonio Auto Show I was able to take the Ford Ranger for a quick spin on the highway and experience its off-road capability on a short obstacle course.

EXTERIOR: Now, living most of my life near the border means that this all-new design on the Ford Ranger doesn’t look all-new to me. The Ranger may have left the States in 2012, but it’s been going strong internationally. But, when I brought this to the attention of a Ford rep. he assured me that the 2019 U.S.-spec Ranger is slightly larger, and the size difference is enough to notice when parked next to an international model.

In its update for the States, the front end reminds me of the Ford Escape, but beyond that, the rest of the truck looks good. Ford managed to capture body lines that appear straight-edged – yet curved at the same time – throughout the truck’s profile. This is a real pickup truck with a fully-boxed frame, and not – notably – a crossover with a bed. In short, for truck enthusiasts, this is the real deal. SuperCab Rangers will have a longer bed than SuperCrew models.

INTERIOR: The 2019 Ford Ranger will be offered in three trim levels: XL, XLT, and Lariat, with FX4 and FX2 being sold as off-road packages. Inside, the Ranger’s space in the rear is plentiful. When I rode in the backseat, I didn’t need to take off my hat to be comfortable and had enough legroom to cross my legs. In looking over the interior, I saw bits and pieces from other Ford products sprinkled throughout. A speedometer gauge in the middle with digital gauges on either side reminded me of the Ford Fusion. The automatic gear shifter reminded me of a Ford Focus.

There was nothing in the interior, however, that managed to catch and hold my attention. However, at first glance I knew what every button did, and getting a feel for how it drove felt like getting reacquainted with an old friend. The 2019 Ford Ranger is user-friendly for first-time truck buyers.

PERFORMANCE AND SPECS: Powering the new Ranger is a 2.3-liter twin turbo four-cylinder making 300 horsepower. The transmission will be a 10-speed automatic with 3 overdrive gears. (General Motors actually helped co-develop this transmission with Ford, and I wonder if that’ll upset die-hard GM and Ford loyalists.) The new Ranger can really scoot when you give the throttle a boot-full. The twin-turbo engine makes a nice little buzz and purr that tickled the senses into a smile. It may not be a Raptor, but it does have teeth.
The Ranger’s FX4 off-road package includes upgraded tires, steel front bash plate, reinforced frame-mounted skid plates, off-road tuned shocks, and a DANA electronic locking rear differential. Ford Rangers with 4×4 will be equipped with a 2-speed transfer case capable of shift-on-the-fly between 2-High and 4-High, allowing you to shift between 2WD and 4WD on a selector dial on the dashboard. The other off-road package, FX2, offers the same features but without, of course, the 4×4.

Trail Control Hill Descent is new for the Ford Ranger, and is basically off-road cruise control. Drivers can set the speed from one to twenty miles-per-hour and the Ranger will crawl at the set speed over different terrains. It’s important to note that applying the brake does not disengage Trail Control. Safety driving features like adaptive cruise control and lane assist are standard on top trim levels.

The Ford Ranger is expected to get 21 mpg City, 26 mpg Highway, for a 23 mpg Combined; this is according to a leak on the forums. Prices start at $24K and climb to the mid-$30s, keeping the Ranger competitive with other midsize trucks, like the GM Colorado and Canyon, Nissan Frontier, and Toyota Tacoma.

FINAL THOUGHTS: Ford is aiming at Ranger loyalists who can finally trade-in, as well as first-time truck buyers. Ford wants to make the Ranger cool enough for people who don’t really need a truck, but like the idea of owning a midsize. I can name a few people who fit that demographic. I think the new Ranger will do well in large cities. Full-size trucks aren’t getting any smaller and midsize trucks are proving to be a best-of-all-worlds compromise for people living in the city, but wanting a truck for light duty or social status. And that’s (probably) a lot of us.