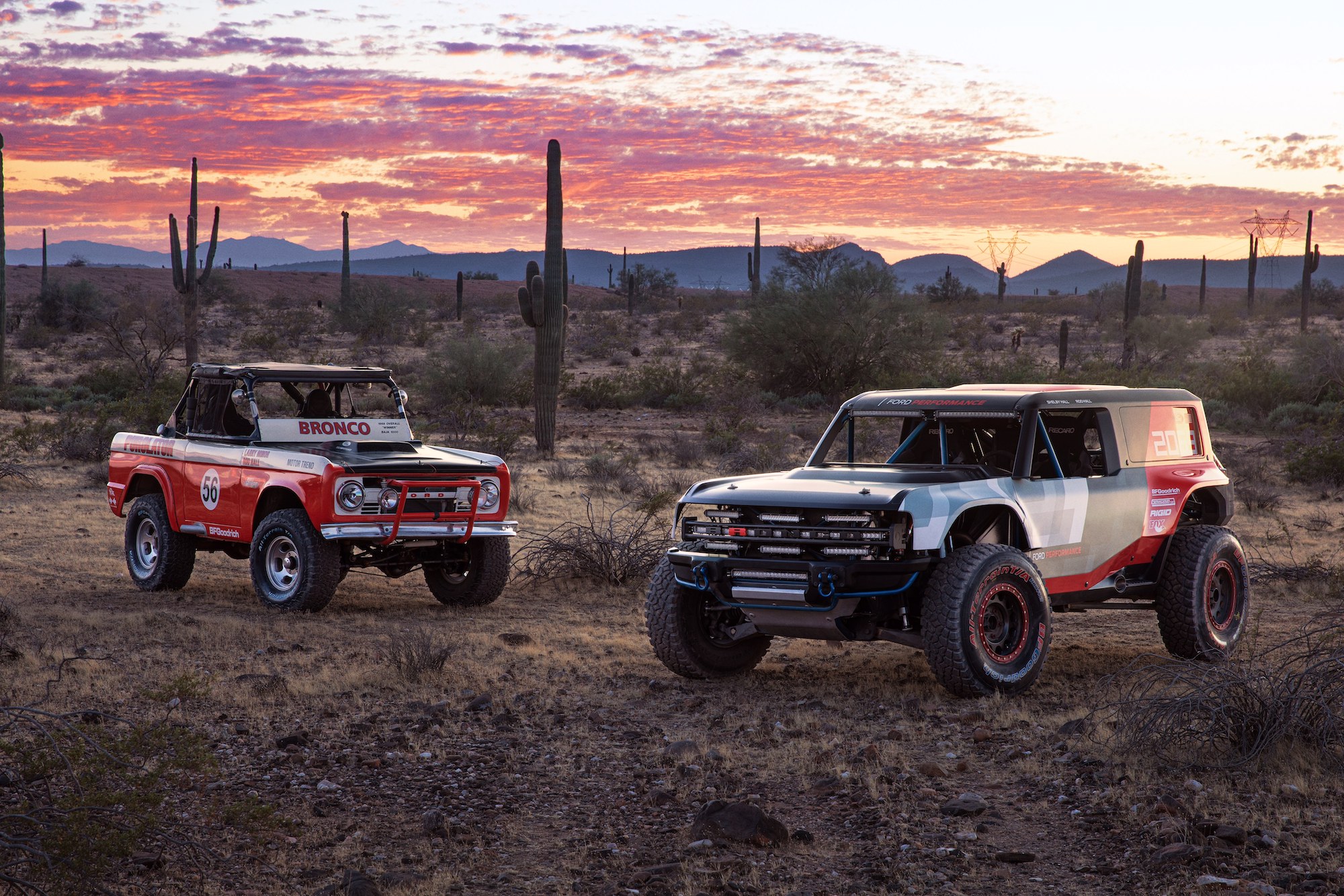 The SEMA show is getting off to an exciting start with its first major story: The 2020 Ford Bronco R prototype’s debut. This purpose-built off-road racer, using the 2020 Ford Bronco’s powertrain and suspension architecture, is scheduled to race the 2019 Baja 1000, starting on November 19th. Ford’s mission in bringing back the legend is to “test it like a legend,” and I’ll admit – that’s a damn good line.

It gets better when you discover the Bronco R’s livery is inspired by Rod Hall and Larry Minor’s 1969 Ford Bronco. Built by Bill Stroppe, Rod Hall took the Bronco to an overall 4×4 win at the Baja 1000 in 1969, and Hall continued to race, winning 25 times total before passing at the age of 81 earlier this year. Hall’s 1969 Baja 1000 win is said to be the only overall 4×4 win in a factory-chassis 4WD vehicle.

Rod Hall’s granddaughter, professional off-road pilot Shelby Hall, will be one of the drivers in the 2020 Ford Bronco R team at the Baja 1000, honoring her grandfather on what is the 50th anniversary of his win. Ford has said that the 2020 Ford Bronco R gives “hints” to what the production model Ford Bronco will look like when it is released in spring 2020.

Judging from the Bronco R prototype, it certainly looks like Ford’s design team paid close attention to what we the people want the next-gen Bronco to look like. We wanted a square roofline, a tight boxy body with sharp angles, and a chassis to fit 33-inch tires,  standing tall over the now domesticated, sweater-wearing Chevrolet Blazer. The 2020 Ford Bronco R has the look, sound, and attention; now it just needs to blaze a trail over the 1,000 miles of Mexican desert. No pressure.

What really gets my blood pumping about this news is the delicious quality of the content. It has everything that makes marketers and PR people drool: Nostalgia, historic legacy, motorsport, family, action, anniversary and anticipation. A quick stroll through social media will see that everyone is writing about it – including me. My cowboy hat is tipped to the group of people who came up with this idea and those who worked tirelessly to make sure all the variables synced to meet this critical deadline. I look forward to seeing what kind of rooster tails the 2020 Ford Bronco R prototype will make at the SCORE Baja 1000 later this month.

Ford also released two short films with the reveal. One shows Rod Hall’s 1969 Ford Bronco traveling along a desert road, only to be overtaken by the 2020 Bronco R at its debut. The second video is a tribute to legendary off-road racer Rod Hall. Good stuff, all.