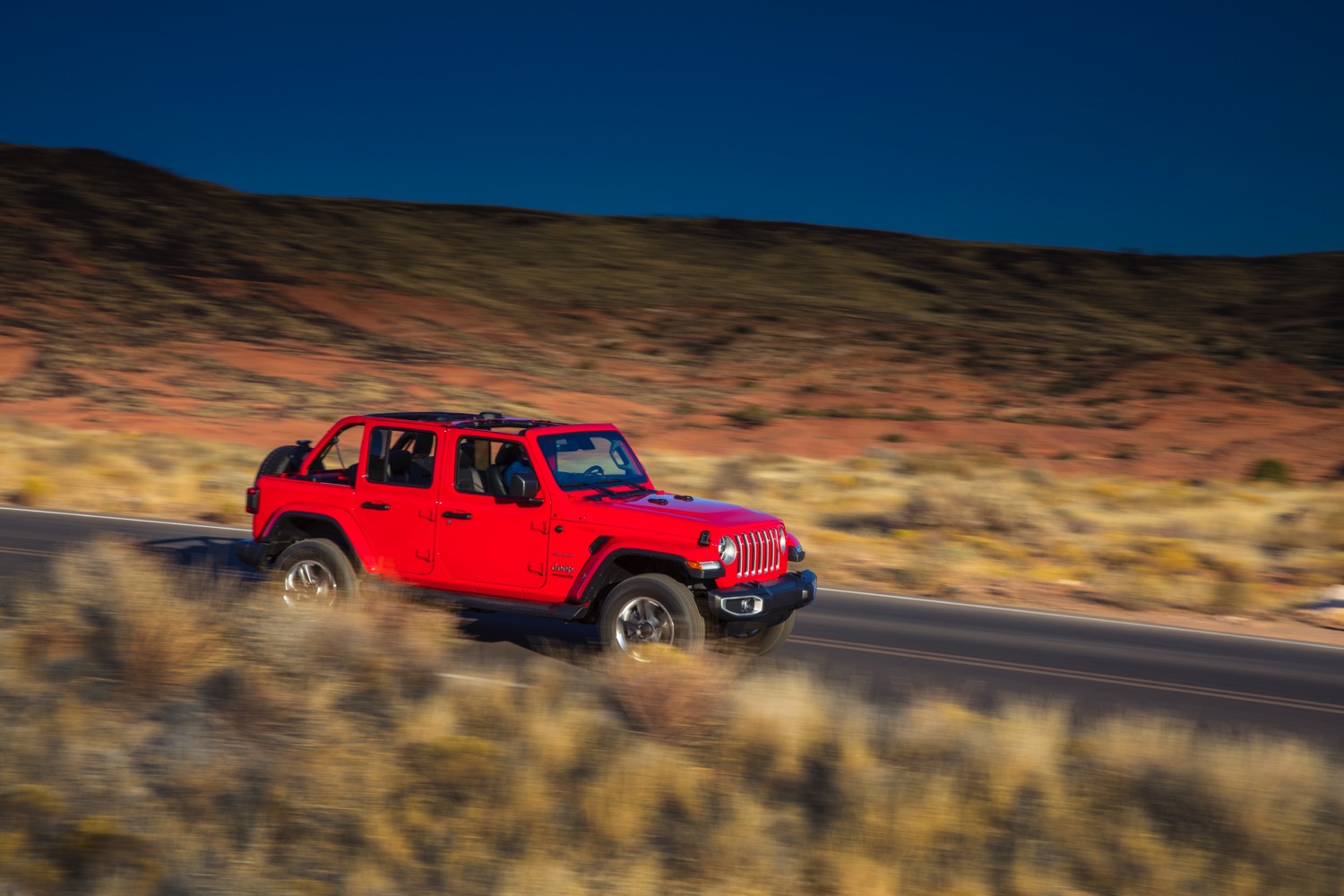 In Southlake, a Tarrant County suburb just west of D/FW Airport, Jeep’s Wrangler could be that community’s National Car. Given the town’s adjacency to Lake Grapevine its citizens have a recreational bent, and with the area’s affluence they can buy pretty much anything they want. Your teenager wants a Wrangler Sport as their first car? Of course. The wife wants a 4-door Wrangler Sahara as her go-to ride for Central Market? Of course. And dad would enjoy having the Wrangler Unlimited to tow the Jet Ski to the lake? You betcha. The Wrangler Unlimited and its derivatives are everywhere in and around Southlake; in point of fact, the only challenge around its Town Center is finding a Jeep with some dirt on it.

If those in Southlake were to look west (and by that I mean West Texas) they might take a likin’ to a Wrangler with better economy. And if they would combine that affection with a line of credit (or more likely, a funds transfer), they’ll find in Jeep showrooms a 2020 Wrangler Unlimited equipped with FCA’s turbocharged diesel, hooked up to their 8-speed automatic. If you want to make sure you always have enough diesel before you head out on a trip, then consider getting a diesel fuel delivery to your home.

The 4-door Wrangler Unlimited, introduced for the 2007 model year, was a homerun from the git-go. Those students of Jeep knew it would work – the only question was why it took so long. While stretching the wheelbase and overall length worked against those negotiating tight singletrack, few Jeep owners – especially those in Southlake – find themselves on a gravel road; you can forget the tight singletrack. And the practicality provided by the 4-door Unlimited was far removed from the notable lack of utility in the 2-door, short wheelbase Wrangler. With the 2-door you were driving (at least figuratively) a single slice of pizza, while the Unlimited afforded you the whole pie with – when loaded up – every possible topping.

In the redesign for 2018 the Wrangler and Wrangler Unlimited gained a host of improvements; but then, after over a decade of producing the prior generation you’d hope for a host of improvements. None, at least individually, represent the tidal shift afforded by the addition of a diesel to the lineup. With the efficiency of the diesel, along with the oil-burner’s prodigious torque, you have under the hood a powertrain wholly appropriate to a Jeep owner’s off-road agenda.

Despite the negatives associated with diesels from a handful of European OEMs (think VW, Benz and BMW), the diesel fleet is growing in domestic pickups and Jeep. While the Jeep’s 3.0 liter diesel V6 (similar in spec to what RAM uses in its 1500 ½-ton) produces but 260 horsepower, the diesel’s 442 lb-ft of torque is in another ballpark. And despite the additional 400 pounds of curb weight associated with the diesel installation, off-the-line response is responsive, and the diesel Wrangler can eat up the highway miles like nobody’s business. The EcoDiesel-equipped Wrangler is – in a word – relaxed, and gives you full confidence that this Jeep can pull the 3,500 pounds it’s rated to tow.

Jim Morrison, the exec responsible for the Jeep brand in North America, offers the EcoDiesel as a Wrangler “with unmatched fuel economy, incredible driving range and the legendary off-road capability customers have rightly come to expect. It’s the perfect combination…with 29 miles per gallon (highway).”

Inside, the Unlimited’s 22 inches of additional wheelbase provide a comfortable environment for four, while given the narrow cabin five will be a push. Also, while our Sahara trim provided leather-trimmed seating, the plastics are what you expect in a $30K Wrangler Sport, and not what you’d hope to find in a $50K Unlimited. Happily, the greenhouse is everything you’d expect from a 2-box profile that remains traditionally vertical. If Jeep were to build a fixed roof hardtop the glass area would be even more expansive, and the vehicle might very well be lighter. But then, those kids in Southlake couldn’t remove that fixed roof while heading to Lake Grapevine.

With its $6K premium (when compared to the standard V6 and a manual trans) it will take a while to pay back the initial outlay. Traveling 15,000 miles a year with the diesel’s 25 combined EPA estimate, you’ll have purchased 600 gallons of diesel at (roughly) $3/gallon – or $1,800 annually. With the gas V6 you’ll get 19 miles per gallon combined, which necessitates buying 790 gallons at $2.50 per gallon – or roughly $2,000 annually. Now, I’m more confident that the diesel will match its EPA estimate than I am that the gas V6 will match its estimate, but even with rounding up to project a $500 per year savings in fuel, it would take twelve years to recapture your $6,000 outlay. The good news: Jeeps historically return a big percentage of their initial investment, and a diesel-equipped Jeep should do even better. Like money in the bank, Man.

Were it my money, I’d grab a mirror, look in that mirror, and ask myself how often I’m actually going off-road. You know, not the gravel excursions down a fire trail, but rocking along where there’s really no pavement – and instead of shoulders you’re given shudders. If the answer was but a few times a year, I’d rent a Wrangler for those weekends and spend my $50K on Jeep’s 2020 Grand Cherokee. And I’d get the Hemi…while I can still get a Hemi.