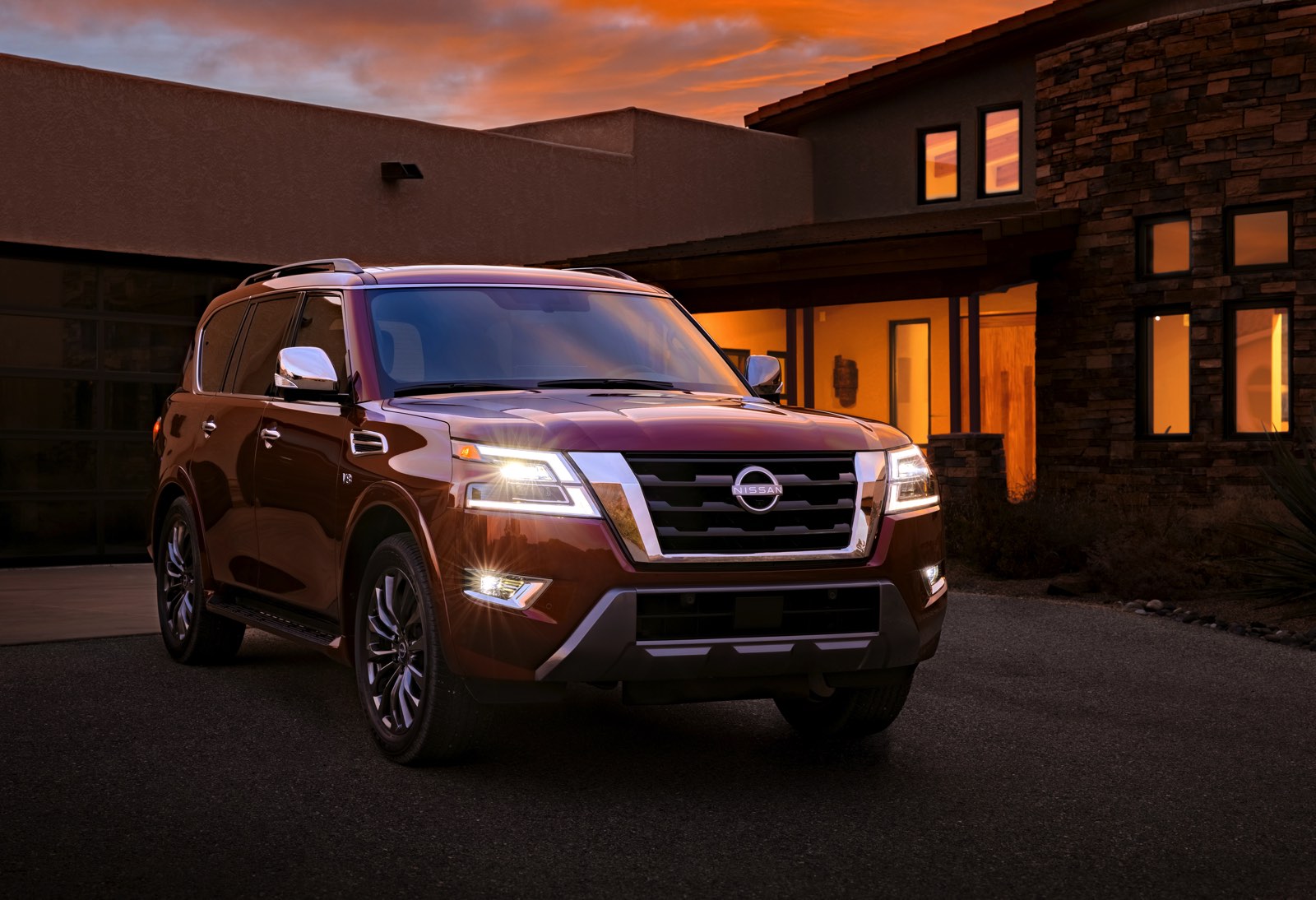 Old School For Your Carpool

The visual isn’t fried or seared into my brain, but it might as well be fried or seared. Infiniti’s QX80, the sister ship (with an identical footprint) to our 2021 Nissan Armada, was parked in a supermarket parking lot. Immediately adjacent was an Audi allroad, Audi’s station wagon with – as you’d guess – ‘all-road’ attributes, supplying room for four or five and their luggage. There’s no 3rd row in the Audi, and negligible towing capacity, but it will do most of what the average family will ask it. And its slightly lifted roofline comes only to the Infiniti’s windows. The QX80 and our test Armada, if they were dudes, would be Big Ass Dudes, seemingly of a different generation – and packed with a different sensibility.

That sensibility gets refreshed in the 2021 Armada. Nissan’s ‘At a Glance’ tells us that the Armada’s new ‘rugged’ exterior and ‘premium’ interior offer a combination of strength and luxury(!). In my view, the Armada’s exterior has always done ‘rugged’ well, and the refresh doesn’t make it more so. Its Infiniti sister puts a slightly more upscale contour in its sheetmetal and details, but both offer a footprint that speaks better to Sumi than sushi. The Armada is a tall, upright conveyance able to go toe-to-toe with Tahoes and Ford’s short-wheelbase Expedition. And in its generous height you get a generous greenhouse, making you – even in the absence of a royal title – King of the World.

Inside, you won’t escape the remnants of its old school platform, but Nissan’s product team has tried mightily to keep it relevant in its technology. An all-new, largest-in-class 12.3-inch display is enhanced by Wi-Fi and wireless Apple CarPlay, while Nissan’s standard Safety Shield 360 plus Intelligent Lane Intervention, Intelligent Forward Collision Warning and Blind Spot Intervention mean you can screw around with Wi-Fi and CarPlay without EVER having to look at the roadway, or listen to the honking of those angry motorists behind you without CarPlay, just wanting to arrive (safely) at their destination.

But within the context of a Big *ss SUV, the trump card – even for you Socialists – is capability. And in that the Armada delivers in a way you’d hope something named Armada – at least after 1588 – would. Under the hood is Nissan’s well-respected 5.6 liter Endurance V8, now delivering 400 horsepower (best-in-class) and 413 lb-ft of torque. Powering either rear wheels or all wheels via a 7-speed automatic transmission, the Armada now offers 8,500 pounds of towing capability (again, best-in-class) with a maximum tongue weight of 850 lbs. and, not surprisingly, a 13 City/18 Highway/15 Combined EPA estimated fuel economy. To be sure, given the Armada’s bulk (Nissan gives an AWD curb weight of around three tons!) we weren’t expecting much from the EPA testing, but if this is your daily driver you might want to forego the daily frap in order to buy your daily gallon.

With a large proportion of its direct competitors receiving a redesign rather than a refresh, the Armada lags behind the Tahoe and Expedition in latest tech or greatest number of features. But on some level its old school cool is reassuring. Sure, Ford’s EcoBoost V6 specs read and perform well, but there’s a complexity to a boosted mill that you won’t see – or suffer – in a normally aspirated V8. And while we like the upscale angularity of the all-new Tahoe and its GMC and Cadillac siblings, those – at least for now – don’t seem to convey the timeless appeal of Nissan’s take on fullsize.

The top-of-the-line Armada Platinum tested was absolutely splendid in its Coulis Red Pearl coating and quilted leather interior. But it was also over $70K, and at that price I’d hope to be shopping on an Infiniti showroom, with its better coffee and real leather sofas. If I were thinking Armada I’d be thinking a 4WD SL, with a sticker closer to $60K. At that price point it’s a helluva lot of SUV, and one helluva deal. Pool your savings.

The 2021 Jeep Gladiator Rubicon 4×4 EcoDiesel – How does it stack up?
Remember the Murano? Driving the 2021 Nissan Murano Platinum AWD
Event Calendar