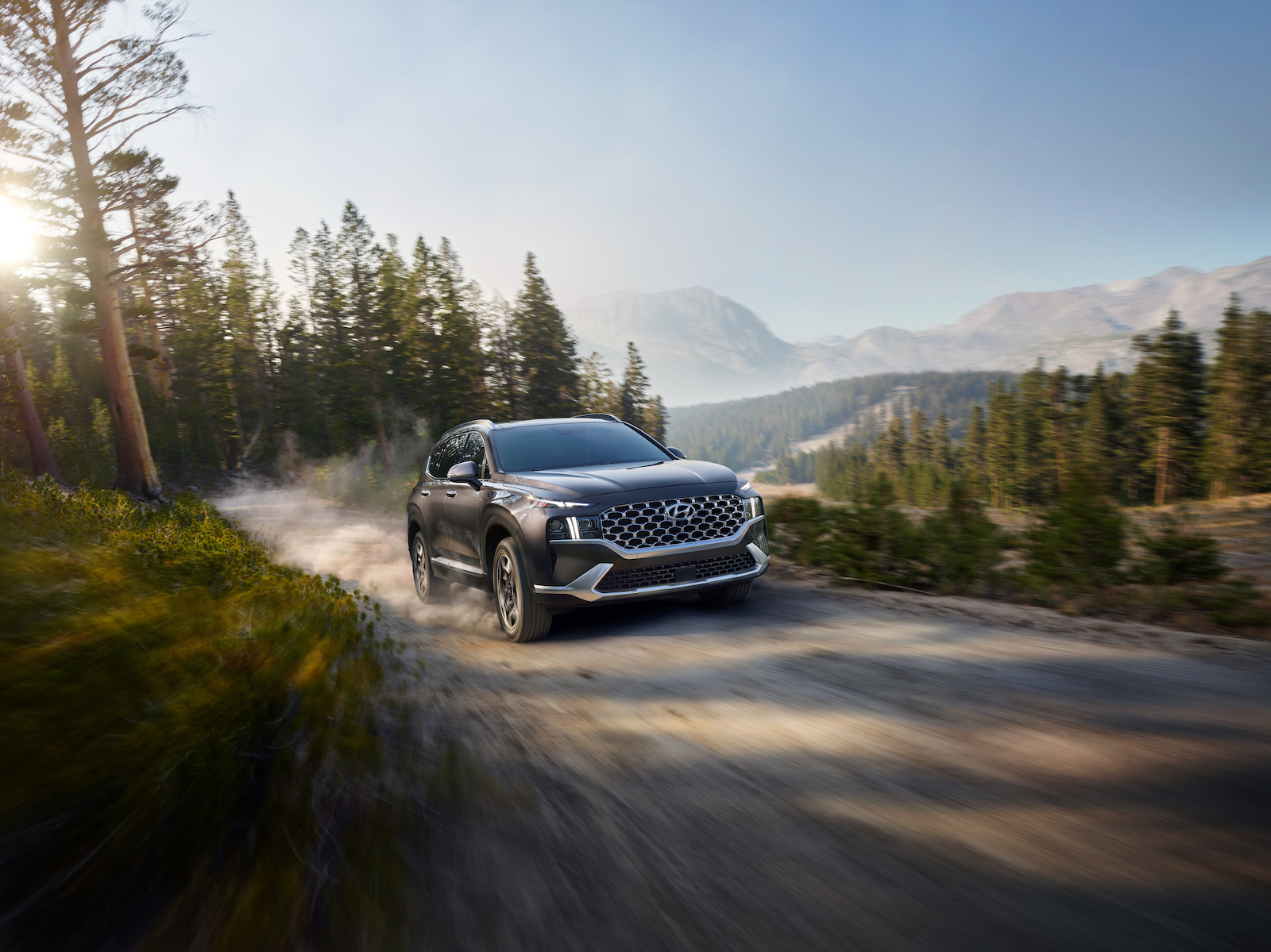 MUCH ADO ABOUT SOMETHING

With each and every Hyundai review – and there have been a few – I invariably note that Hyundai is on a roll, with an expansive lineup that’s increasingly attractive, or – if you prefer – an attractive lineup that’s rapidly expanding. Sales continue to grow, as does customer satisfaction. And awards and recognition multiply, as evidenced by U.S. News & World Report naming four Hyundais to its 2021 Best New Cars for Teens listing. And while I’m somewhat baffled by a teen getting – or even wanting – a Hyundai Santa Fe Hybrid as a car to learn on, it’s there on the U.S. News list. But if you’re an adult looking for something to buy in the midsize crossover category, you should put the Santa Fe Hybrid on your list.

At the moment, there’s a lot of news (and here I mean real news, not the fake variant…) on the Hyundai showroom. The redesigned Tucson is about to give Toyota’s RAV4 and Honda’s CR-V a run for your money, and a Tucson-based Santa Cruz compact pickup is about to get a whole lot of 20-something money (and, I think, 60-something money). But we’re here to talk about the midsize Santa Fe and its hybrid efficiency – so let’s get on with it.

The midsize, 2-row crossover tends to get lost in a market where there’s a great deal of attention given to the compact and subcompact crossovers, and a great deal of money thrown at the 3-row crossover. (To that point, when did you last notice Ford’s Edge or Honda’s relatively new Passport?) But with a recent redesign and a host of upgrades – not the least of which is a hybrid drivetrain – the midsize Santa Fe offers an eminently practical solution to the 3-rows are too big/compacts are too small dialog; on any number of levels it feels just right.

Outside, Hyundai would seem to be upping its game with more than a glimmer of glamour. The front fascia has received a Palisade-inspired redo, and now rates a ‘bling’ factor of 9.9. Unlike so many of these refreshed fronts, this actually seems to work, suggesting ‘all-new’ while still working well with the sheetmetal aft of the grille. And as you walk to the doors or hatch, you’ll be impressed with the Santa Fe’s physical and visual balance, perfectly proportioned for the open road or, equally likely, the open garage door.

Inside, its midsize descriptive is almost a misnomer, as there seems to be large servings of head, leg and shoulder room throughout. Parked next to my wife’s Venza, the Santa Fe is more broad-shouldered, slightly higher and wider, with a more substantial greenhouse. And that translates into interior space that’s actually usable for five adults; again, no third row, but when you need it, rent it.

In our Limited trim, the perforated leather makes the appropriate upscale impression, while offering substantial support on top of ample room. On the console are your transmission buttons and mode selection (I vacillated between Eco and Sport), while A/C and audio controls remain completely intuitive. Also neat is the phone charger, which takes the phone vertically, as well as the storage shelf immediately in front of the front seat passenger. In short, there’s a lot to like here, and in terms of perceived quality the Limited trim impresses as being at least $10K more dear than it’s delivered at, looking more like $50K than the test vehicle’s $40K.

Of course, with any hybrid you’re gonna’ wonder what’s under the hood, and in the Santa Fe Hybrid ‘what lies beneath’ is both a high point and a sore point. The good is the hybrid’s 1.6 liter turbocharged four working in partnership with a ‘permanent magnet synchronous motor’ delivering a supplemental 59 horsepower and  195 lb-ft of torque. In combination with the 1.6 turbo’s 178 horsepower and 195 lb-ft of torque (@ 4,000 rpm), you have a genuinely responsive powertrain that truly wants to get up and run.

The sore point: The EPA estimates for the Santa Fe Hybrid are 33 City/30 Highway and 32 Combined. Toyota’s Venza hybrid offers 40 City/37 Highway and 39 combined, numbers almost 40% better. I like the Santa Fe’s drivetrain much better than the Venza, but then, if you’re buying a hybrid it’s probably to maximize your efficiency – and the Santa Fe falls a bit short of that.

For the driving we do in the Venza, which is probably well under 10,000 miles a year, the Santa Fe will consume about 300 gallons of gas annually, while the Venza requires about 250 gallons. Even at $4/gallon, the differential is only about $200 – hardly worth a mention. Were it not for the slightly larger footprint, I’d be all about the Santa Fe in a direct comparison – or I’d be waiting for the Tucson Hybrid with a similar drivetrain and, hopefully, something closer to the Venza’s 39 Combined estimate.