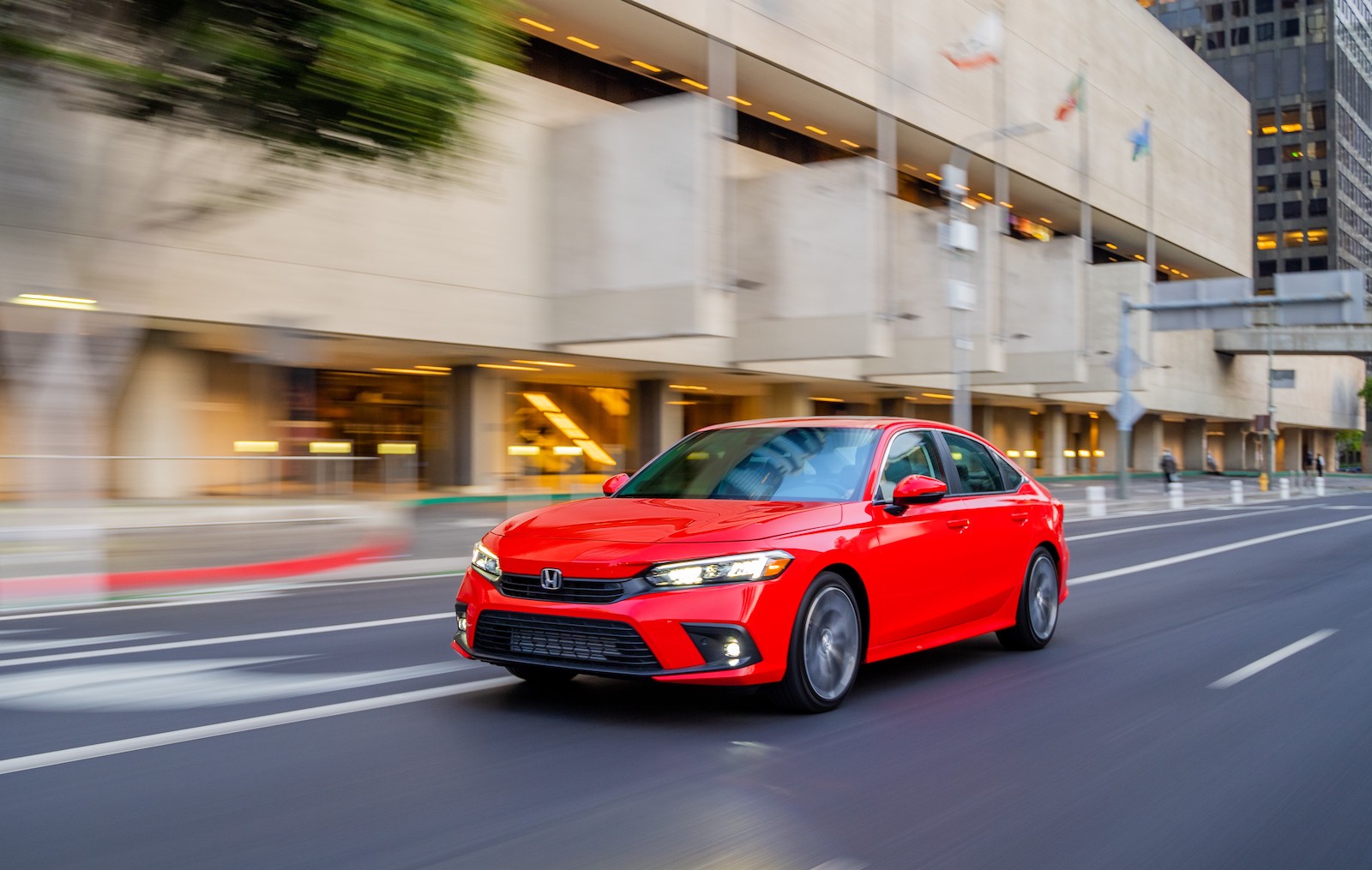 It’s been almost 50 years since Honda’s Civic first hit American Honda showrooms. A successor to Honda’s tiny 600, and clearly inspired by Austin’s front-wheel drive Mini, the Civic might have remained an appropriately small player on U.S. roads were it not for OPEC and its shutdown of oil exports to America in 1973 and 1974. With supplies of oil essentially limited to domestic production, prices for a barrel of oil quadrupled, the cost of a gallon of gas tripled, and lines at gas stations often ran around the block – and the next block. Suddenly ten miles per gallon didn’t compute, while the Civic’s 30 miles per gallon (or so) did. Honda’s subcompact Civic was off and running, while American Honda, just a few years after hitting American shores with its bikes, was off and thriving.

Now in its 11th generation, Honda’s all-new Civic 4-door comes at an interesting moment in the automotive timeline. Crossovers of any size – subcompact to 3-row – are big and getting bigger, the EV (despite relatively small sales numbers) is on the rise, and the 4-door sedan has been pronounced ‘dead’ by all of our domestic automakers; that, of course, is the same group producing 10-mpg wonders in 1973. For those liking sedans and their reasonable footprint, a few import nameplates are still building them, including Hyundai, Kia, Toyota, VW and Honda.

My own Civic timeline began with the purchase of a base (and basic!) 2-door in 1979. It was minimalist transport, with vinyl seats, manual windows and no A/C. I think it was $3K plus taxes and destination, and upon getting the call from our dealer – Goode-Taylor in Dallas’ Oak Cliff – I had to pick it up immediately or it would have been sold to the next in line. To its credit, the Civic was fun and efficient, but when the financial capability allowed me to move on – and up – it was gone.

But I was back ten years later, when the loss of a company demo meant our almost new Jeep Cherokee became two new Civic hatchbacks. By then, the Civic was far more substantial in its footprint and appointments, but we still opted for the base version, upgraded with wheels, tires and – on at least one of them – a Momo steering wheel. With 70 hp connected to a 4-speed manual, you were hard-pressed to get a speeding ticket. With that, I received two; one for speeding, and one for speeding on my way to traffic court.

For our final Civic effort we purchased a ’94 4-door EX from that same Goode-Taylor Honda, where – at that point – I was selling Hondas. The EX was the top-of-the-line, and we still opted for a manual trans. The Accord had just received a redesign, and would have been the more versatile choice. I liked the smaller footprint and nimble nature of the Civic, but four years later – with the purchase of a new Grand Cherokee – it, too, was gone.

With the most recent Civic, built through 2021, I thought Honda had (perhaps) lost me for good. While the functionality of the Civic remained, and it was more feature-filled than ever, its sheetmetal had become funkier, with creases in its sheetmetal serving little purpose and fake vents serving no purpose. In the right color with the right wheels it sorta’ worked, but not well enough to put it on my ‘to recommend’ list. Thankfully, this new-for-’22 rights those wrongs in a big – but not too big – way.

In the showrooms or on the driveway you’ll be immediately impressed by the new Honda’s rightness. And while your reaction to a car’s sheetmetal is unavoidably subjective, you won’t find any missteps in the realization of this new Civic. In its 4-door sedan Honda returns to an almost 3-box formula, with hood, cabin and abbreviated trunk looking less like a faux hatch and more like a conventional sedan. (For lovers of the hatchback, it is making a return – with an available 6-speed manual.) The new sheetmetal is without affectation, and in the absence of stylistic gimmickry punches – at least visually – well above its weight.

Inside, the top-of-the-line Touring trim is as far removed from our ’79 2-door as I’m removed from the then 20-something owning it. OK, we’re both a bit heavier, but also far more mature in our outlook. Trimmed in black leather, the Civic’s interior avoids the oppressive look often seen in all-black environs, with just enough shiny bits and visual interest to keep you awake and, well, interested. Honda claims its ‘simple and clean’ interior design indicates direction for future Hondas, and if that’s the case I’m all in. Even its infotainment is, within the context of 2022, intuitive, and those control locations associated with the act of driving are spot-on. From behind the wheel you can easily envision a commute (if those come back), and you could see a drive to Santa Fe…or Santa Barbara.

Our top-of-the-line Touring offers everything you’d reasonably need, except a high hip point and (available on Honda’s Passport) roof-mounted tent. If you’re inclined to give the sedan a chance – or have never given up on the format – you’ll find this new Civic a great place to hang.

It’s very civil. And a helluva lot of fun.