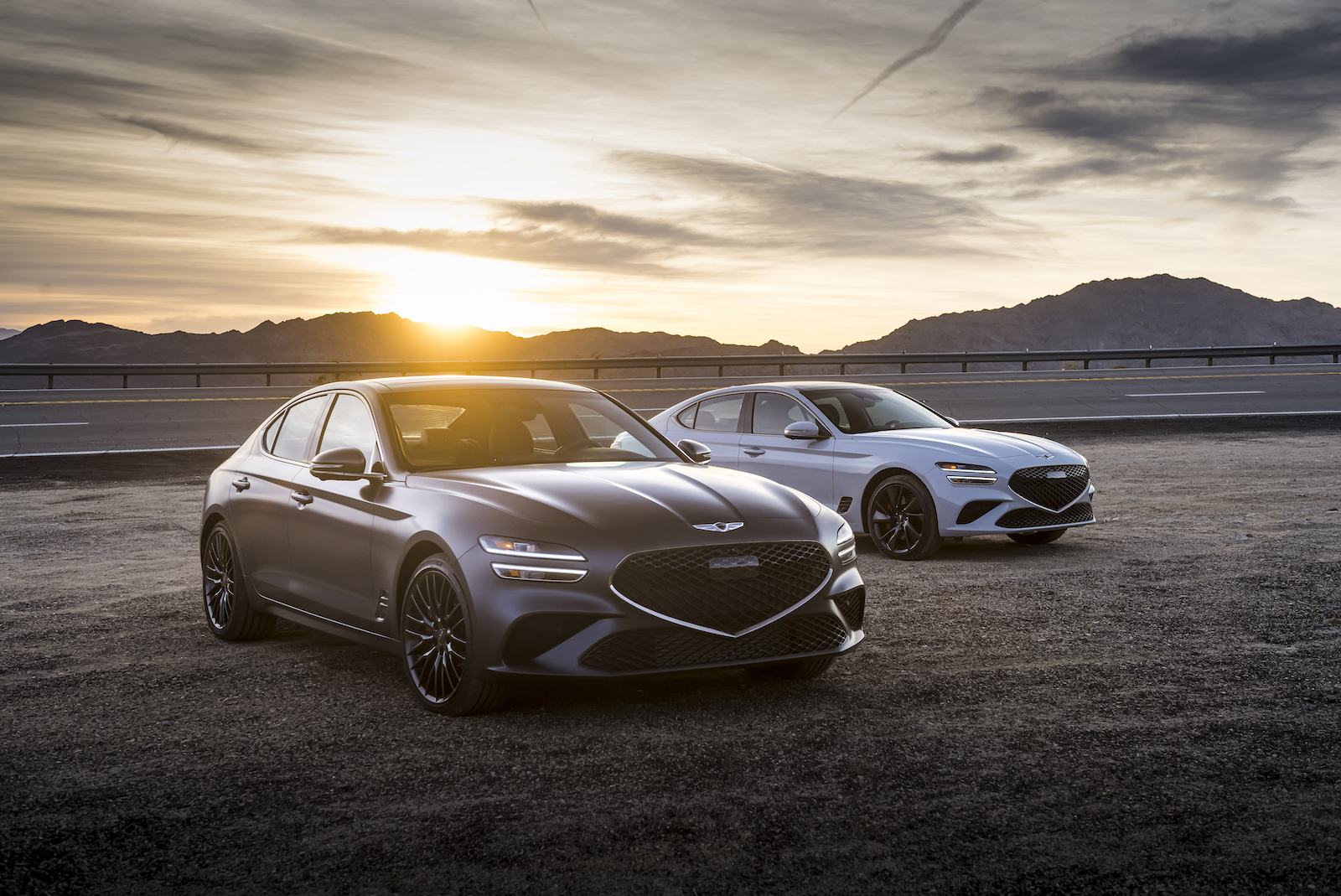 *You know, its place in the marketplace

Since the Genesis tag first appeared on a Hyundai coupe I’ve been enthusiastic, albeit with the usual caveats when a new nameplate is created (Edsel, anyone?) by an established carmaker. Genesis began as a subset of the Hyundai lineup, initially affixed to a 2+2 coupe and 4-door luxury sedan. Within the last few years Hyundai has attempted to do what Honda, Toyota and Nissan did in the mid-and-late-‘80s, establishing Genesis as its own entity with its own dealer network. And while that process hasn’t been as smooth as Hyundai and its dealers would have hoped, the Genesis lineup has been strong right out of the gate. The freshened Genesis G70 sport sedan is but one, not-so-quiet example.

The G70 is the entry point into today’s Genesis lineup, drawing a bead on BMW’s 3 Series, the Mercedes C Class and, to a lesser degree, Alfa Romeo’s Giulia. Like Hyundais past and present, the G70 – especially in its base, 4-cylinder guise – makes a purchase argument based on value, but there’s much more going on here than an accessible price point. You should also consider its design, amenities, quality and performance.

On the driveway our test example, described by Genesis as its G70 3.3T Sport Prestige, offers an almost-elegant athleticism, with a footprint that hangs on to compact even as much of its competition strains to be midsized. The G70 made its initial rollout in 2019, and this refresh brings it in line with the company’s updated sedan and new SUV lineup. And it’s all done, as Genesis puts it, to ‘outperform legacy luxury sports sedans with driver-focused performance’.

I’ll award the G70 team bonus points for doing a refresh without screwing it up. While wishing the grille were slightly more restrained, the overall impression is exactly what the design team hoped to convey: quiet, upscale athleticism that will age gracefully; think Joe Montana and (notably) not Joe Namath. And although it doesn’t deliver the 4-door coupe proportion of, say, BMW’s 4 Series Gran Coupe, the G70 has a visual tightness to it that’s easy to like.

Inside, the $4K Sport Prestige package nets you Nappa leather seating surfaces – quilted, no less – in combination with a microfiber suede headliner, electronically controlled suspension, Brembo brakes and a limited slip differential. And for those of you interested in just about everything, consider the $4,300 Sport Advanced Package, which upgrades the audio, widens the sunroof, supplies 19-inch alloys and dark chrome accents. Of course, add over $8K to a $43,000 base (with delivery) and you’ve jumped at least one financial wall and, from my perspective, a similarly sized psychological barrier.

The step from the G70’s turbocharged four to its twin-turbo V6 is also around $4,500. If given to explosive acceleration, the V6’s 365 horsepower will satisfy better than the turbo four’s 252 horsepower. But then, it’s also thirstier, topping out at 27 on the EPA’s highway cycle versus the four’s 31, and getting but 18 in town, whereas the four gets 21. The amount of driving you do will likely determine which way to go, but as we gravitate to hybrids or all-electric drivetrains, the 365 hp V6 is a last hurrah in all caps: LAST HURRAH!

On the road, whether errand running in town or – as I did – heading from DC to Philly on a daytrip, the G70 is exactly what you’d hope a sport sedan with hints of luxury should be. Your time behind the wheel will connect you to the road, but won’t punish in the process. And your three passengers will enjoy adequate room for short trips, or the almost three hours it takes to get into Philadelphia.

If online or at the Genesis showroom, I’d probably opt for the V6 – but skip the optional upgrades. At just over $40K the G70 3.3T is a homerun, while spending over $50,000 suddenly gives you access to the more established players…if that remains important. In my post-pandemic world, it’s not.