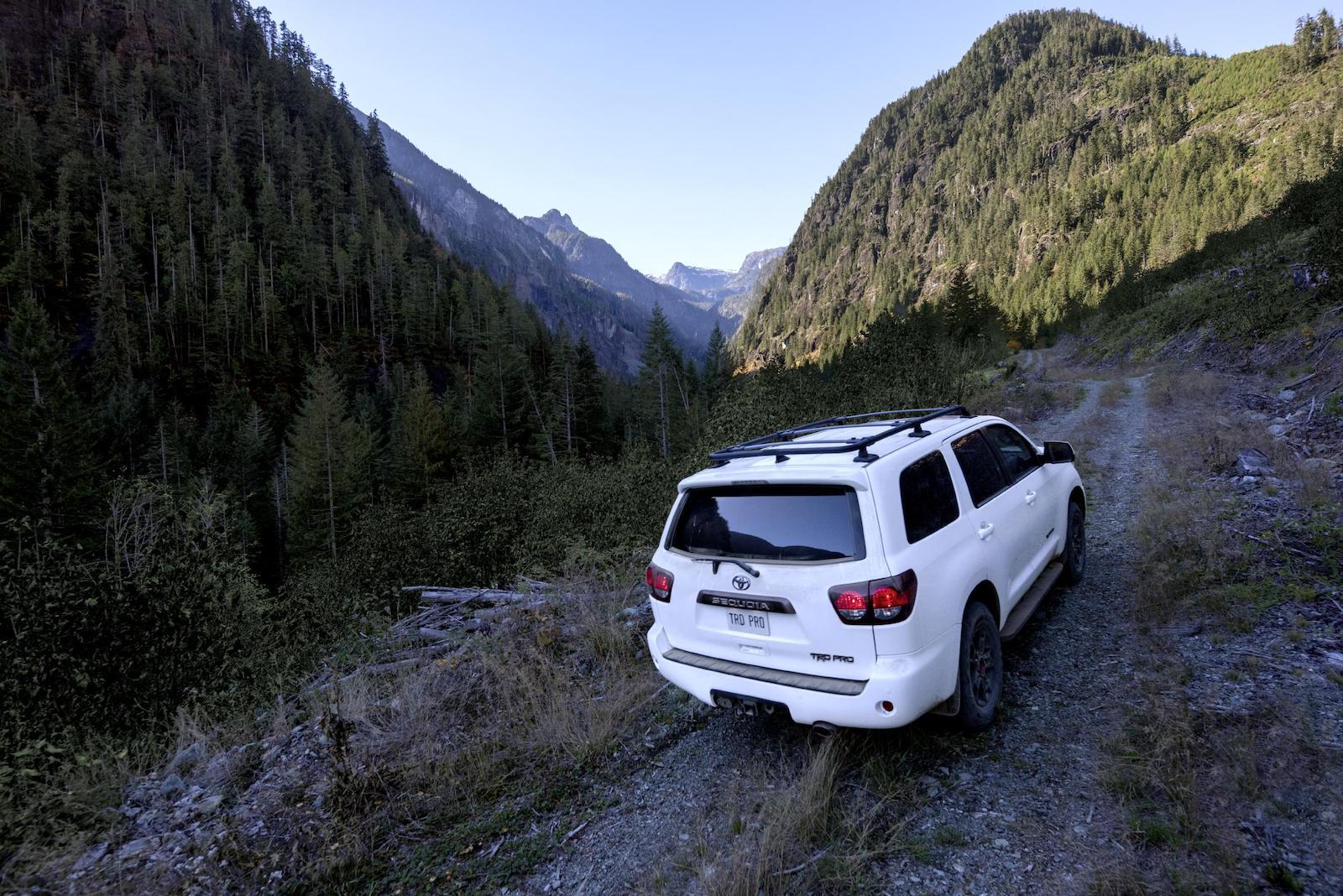 You want the truth? I’ll tell you the truth. The 2022 Toyota Sequoia is in its last days – at least figuratively – on this earth. For all its many years – this generation, the Sequoia’s second, hit showrooms in 2008! – the Sequoia’s body-on-frame platform has been closely related to Toyota’s fullsize Tundra pickup, and as that franchise receives a full redesign for 2022 one can safely assume a redesigned Sequoia is not far behind it. But I don’t come to bury Toyota’s largest crossover; I come only to praise it. For when you need a truck-based SUV for both going and towing, few give you the honest-to-goodness goods of a big Sequoia.

In producing the Sequoia, beginning in the 2001 model year, Toyota took the same menu Ford had taken with its first Expedition, or Chevy began using so many years ago with any iteration of its venerable Suburban: grab a pickup platform, cover it in 3-row, 4-door sheetmetal and sell it for far more than that donor pickup would bring. Toyota pulled the trigger in the late ‘90s as its not-quite-a-fullsize pickup was morphing into something closer to what Ford and GM were building at the time.

For the Sequoia’s design team, the sweetspot is a ‘tweener, a tad longer and more capable than Chevy’s Tahoe or Ford’s short-wheelbase Expedition, while enjoying a shorter footprint than the Suburban or long-wheelbase Expedition. It’s also slightly narrower, and while that still makes the Sequoia something less than handy in tight parking spots, you’ll aim for spaces in the Toyota you’d probably avoid in the Chevy or Ford. I happen to like SUVs capable of easily navigating the urban streetscape; the Sequoia does it, while much of its truck-based competition does not.

In the walk-up, you’ll not see the visual differentiation now common in the crossover and SUV segment. As just one example, the Sequoia’s front fascia offers a traditional grille framed by LED headlights. Finished in ‘Lunar Rock’, exclusive to the TRD Pro trim level, the sheetmetal has few design elements to suck you in, but then, there is nothing here to turn you off. It is, in a word, a form designed to function, an everyday tool for your everyman tasks. Your neighbor, cycling through an endless number of Land Rovers on 3-year leases, won’t be impressed, but you’ll have clear title to the Sequoia in five years, and no payments – and few repairs – over the next decade; hell, you could buy a small Airstream with the savings.

Inside, Toyota’s Sequoia takes functionality to a new/old level. The infotainment screen looks more like a tablet than your TV, but updates to its functionality mean – of course – that it’s less functional. While the TRD Pro offers leather seating, interior surfaces are almost all done in black plastic. If camping, it’s easy to clean. But if glamping, you’ll probably not feature these interior furnishings on Facebook.

But here the name of the game is not what’s in the truck, but what you can carry in the truck. With the second row upright the Sequoia supplies almost 67 cubic feet of cargo area, while there’s 120 cubic feet behind the first row with that second seat folded. Even when all three rows are raised for passengers you have almost 19 cubic feet behind that third row, similar to what a midsize 4-door will give you in its trunk. It’s an impressive amount of room if getting a family of four to the airport, or driving them to LA.

Under the hood Toyota opts for reliable, providing 5.7 liters of normally aspirated V8 power (381 @ 5,600 rpm) and torque (401 lb-ft @ 3,600 rpm). Driving either the rear wheels or all four wheels through a 6-speed automatic, responsiveness is good, while efficiency is what you’d expect from a platform now in its 15th year of production. The EPA estimate of 13 City/17 Hwy and 14 Combined is typical of what was expected in much of the last decade, but probably not acceptable to a large percentage of the population in this decade. As you’ll see shortly (and we’ve already seen in the newest Tundra), Toyota is working on it.

If considering an SUV or crossover for towing, know that the 4X4 Sequoia will give you up to 7,100 pounds of towing, where most of the 3-row crossovers – think Toyota’s Highlander, Nissan’s Pathfinder or Kia’s Telluride – max out at 5,000 pounds. In my own somewhat limited experience, towing 4,000 pounds with a Grand Cherokee rated for 7,000, you want a surplus of capability when towing real trailers. The Sequoia gives you that surplus, while Toyota’s Highlander would not.

Our test Sequoia, with the TRD Pro package, is maximized for offroad usage. But it also costs some $10K more than the more basic SR5 trim with 4WD. If it were my money, I’d pop for the SR5 and use the $10K in savings on a couple of play bikes, or someone’s used side-by-side. Let the Sequoia get you to the trailhead, and then have yourself a blast on those trails.

For almost ten years Toyota has been telling us to go places. In its 3-row Sequoia you can go almost anywhere. And should.