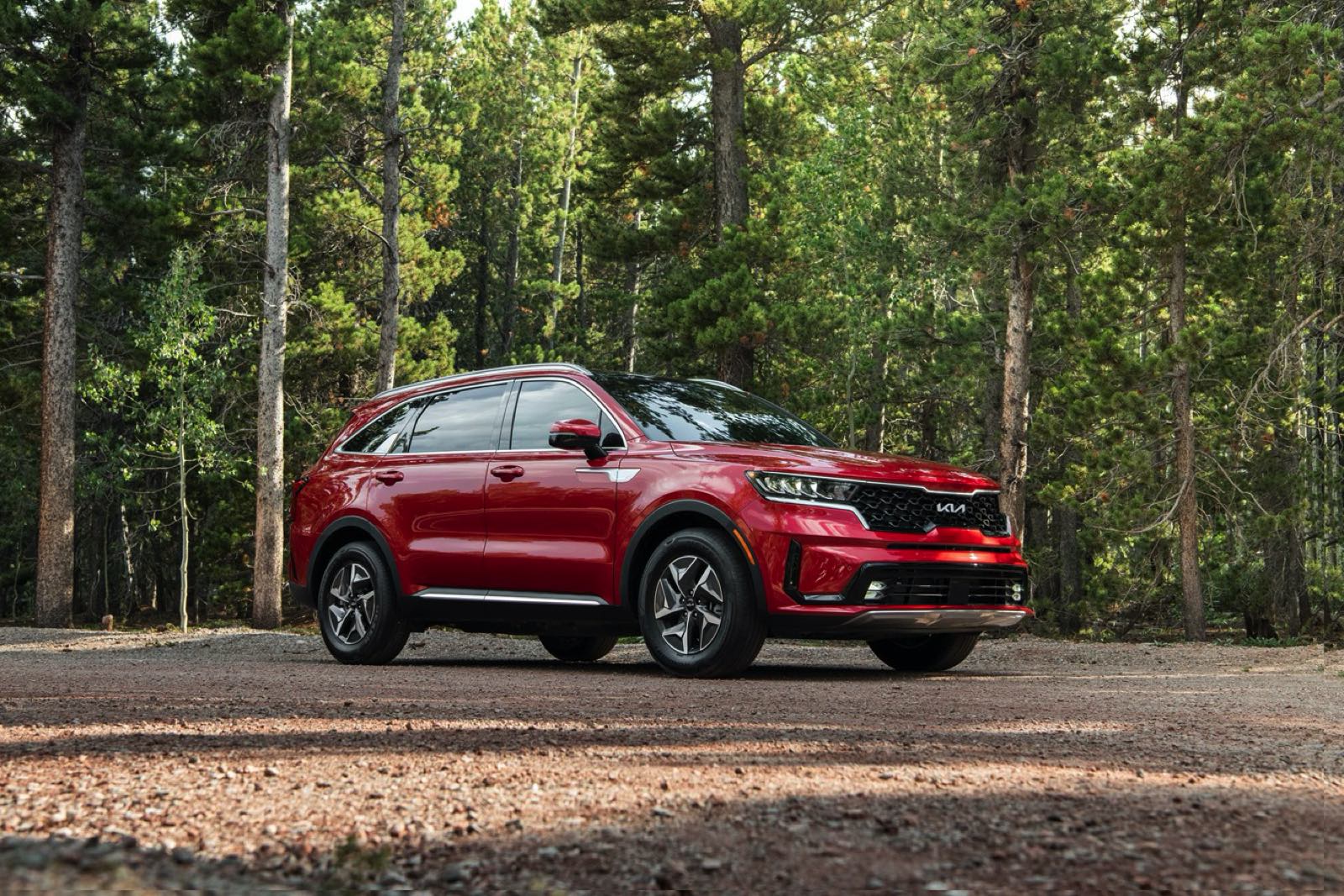 One small sip for man…

Rarely does a midsize people hauler merit a rapid moonlit spin through the backroads, but the 2022 Kia Sorento Hybrid’s manifest good manners piqued our curiosity.

Pleasant on the open road, agile around town, nimble in parking lots, ritzy enough for a day at the spa with Blonde Bride, one had to ask, “Is this thing any good at speed?”

A three-row SUV is no sports car, but the combined urge of a 1.6-L turbo gas engine and an electric motor give the Sorento enough oomph to step smartly up to 120 mph (according to Kia and other independent testers, Officer). The ride is comfy – yet nicely damped to control body roll – while the steering is pliable. And the whole platform is sufficiently responsive that the Sorento can run with the big boys in the fast lane on Texas highways and byways.

Other reviewers, such as Consumer Reports, tend to degrade Sorento’s handling characteristics. It’s hard to know what to make of that. Auto writers like to compare all vehicular handling to the last supercar they drove. Qualitatively, CR decided that when Kia came out with an all-new Sorento in 2021, the steering didn’t feel as right as in the previous generation. Quantitatively, the magazine noted the new model outperformed the old in the slalom on the test track.

I found the Sorento to be comfortable to drive, well planted, and decidedly within its limits at all speeds.

On the other hand, one cannot fault CR for questioning Sorento’s reliability. Kia and parent Hyundai hold the record for civil penalties and class-action settlements related to recalls. (The term gobsmacking comes to mind.) To be fair, the recalls have not involved all models in all years, but they have involved Sorentos.

Indeed, the National Highway Safety Administration issued a recall on March 30 for gas lines that could leak and cause a fire in turbocharged 2022 Sorentos. Whether this relates to 2.5-L turbos found in upper-end Sorentos, the smaller ones found in hybrid and plug-in models – or both – is hard to say. NHTSA has yet to post the technical bulletin for this recall.

Kia and Hyundai have cleaned house among internal combustion staff, and are strategically committed to going all-electric; one would hope these bedeviling quality control issues will fade with time. The latter two words in that sentence appear to be the operational ones.

On the other hand, the companies offer the best powertrain warranties in the business – 10 years/100,000 miles – while on the third hand, those are not transferrable to the second owner. That would seem to be an important piece of fine print.

On the fourth hand, I am with my friend and colleague Adam Moore at TxGarage who is blown away by the overarching excellence in the execution of this vehicle. Lovely to behold inside and out, with superb fit and finish and elegant materials throughout, the Sorento makes an exquisite first impression.

The dash, switchgear, and infotainment section are all brilliant in design. Seats are broad and comfortable, including the captain’s chairs in the second row of our tester. Charging ports are readily available, even for the third row, which is kid-sized.

Slotted nicely between a compact SUV and a full-sized, seven-passenger one, the Sorento offers a feeling of substance while still being maneuverable. Hence, it was an immediate hit with the women in the clan.

Even the entry-level LX comes with a suite of life-saving driver assists, something Kia does as well as anybody. Move up to the mid-trim EX, and Kia starts to offer things that really ought to be standard, like stop-and-go dynamic cruise control and blind-spot monitoring. Goodies like park assist await better-heeled buyers.

Starting at $29,590, the Sorento has nearly as many flavors as Howard Johnson’s (you’re dating yourself if you get that one.) It comes in eight gas-only models, two hybrids, and two plug-in hybrids.

That’s a lot to think about, but our tester, a Hybrid EX, which has a combined fuel economy estimate of 37 mpg – meaning it could go 460 miles on a 12.4-gallon fill-up – had a premium feel, most features one would want, and a sticker price of $37,820. Delivered.

The plug-in Sorento uses the same drive train but adds a bigger battery. It goes about 32 miles on electricity alone before the gas engine kicks in. If you drive less than 32 miles a day, you will never need to buy gas. Just plug it into a regular outlet in the garage every night.

Plug-in hybrids are probably the smartest play until the nation’s system of public chargers is built out, something that will occur in the next few years. They offer the comfort of being able to run on both gas and electricity and  can deliver the EPA equivalent of 80-100 mpg. The Sorento plug-in is eligible for a federal income tax credit of up to – meaning they won’t give you back more than you pay in – of $6,587.

Toyota has a compact PHEV, the RAV4 Prime, but family-sized models are hard to find. Kia is taking advantage of that, loading up its plug-in models and selling them for close to $50,000.