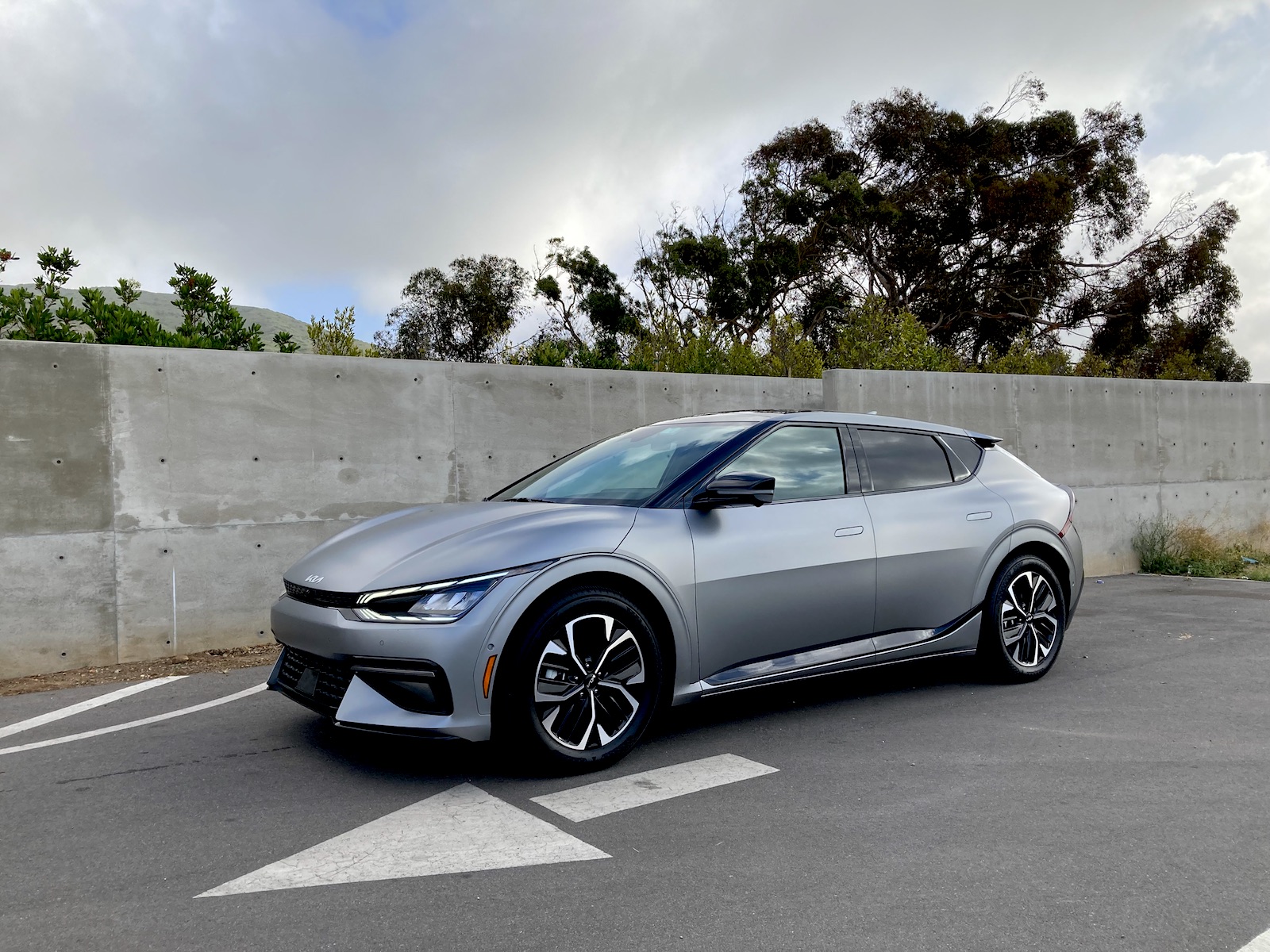 Los Angeles – It sat, at the offsite parking facility near Burbank Airport, like a Car of Tomorrow might sit, absent – of course – the protective wrap. With its press introduction some four months ago, and detailed descriptions from the Internet now almost a year old, its shape shouldn’t have surprised, but somehow it does. There’s nothing Jetsonian here, but then, there’s little sheetmetal conforming to what we expect from the industry – and certainly few elements owing anything to internal combustion. Kia’s EV6 is an electric vehicle – hence the ‘EV’ in its designation. But it’s also, in both its concept and execution of that concept, almost EVangelical.

If you’ve been paying any attention to the auto industry over the last decade, you’ll know that with the introduction of Tesla’s Model S entrepreneur Elon Musk hit the industry’s reset button in a way that only a few had punched it before. Henry Ford comes to mind, as do GM chairman Alfred Sloan and – perhaps – GM design chief Harley Earl. In what had historically been little more than a niche pursuit chronicled by Popular Science, under Musk’s vision the electric car became an aspirational purchase, even as Tesla maintained a semi-accessible price point. And the Tesla fever only heightened with the subsequent introductions of Tesla’s Model X crossover and Model 3 sedan.

To Kia’s credit, they’ve not built a Tesla clone; instead, the design and engineering teams have crafted what appears to be a wholly original take on motoring in this century.  In his first look, my son-in-law saw a bit of Jaguar’s iPace in its overall shape and stance, and I don’t disagree – while noting the Kia sits back on its chassis, while the iPace is almost cab-forward. But this isn’t the slavish imitation of an upmarket brand we saw with the LS 400 thirty years ago, or with Hyundai’s first Genesis sedans. Sharing its platform with Hyundai’s Ioniq 5 EV (recently voted World Car of the Year), the EV6 is more organic and fluid, while the Hyundai impresses as a wider, taller GTI; in short, much more angular in its execution.

That shared platform, which Kia dubs its Electric-Global Modular Platform (you guessed it: E-GMP), offers the EV6 prospect rear-wheel drive or dual-motor all-wheel drive variants. Opt for rear-wheel drive in everything but the base trim and the EPA estimates you’ll enjoy a range of 310 miles, while the base trim – they call it ‘Light’ – achieves 232, and the midrange ‘Wind’ trim with all-wheel drive delivers approximately 274. In Los Angeles, a drive from Santa Clarita (north of Burbank) over to Malibu and back consumed roughly 40% of the available charge. On a commercial charger at the apartment the recharge was about six hours plugged-in at Level 2, and about $10 on the Mastercard.

Inside, the upmarket GT-Line is comfortable and accommodating. The EV6’s 114-inch wheelbase is the same as Kia’s 3-row Telluride, while underpinning a much shorter vehicle. But that long wheelbase makes for an expansive interior, with 102 cubic feet for passengers, 24+ cubic feet of cargo with the rear seat upright and just over 50 cubic feet when folded. And while the layout and touchpoints are contemporary, the overall impression is restrained and helped – in my view – by the lack of a laptop screen forcing itself into your field of vision.

If driving anything but the base trim level, you’ll enjoy 225 horsepower from the single rear-wheel drive motor, or a combined 320 horsepower from the dual-motor, all-wheel drive application. That 225 horsepower will propel the EV6’s mass from 0-60 in just over 7 seconds, while the 320 horsepower dual-motor gets you there in just over five. (Of course, with the single motor you could always leave two seconds earlier…) As you’d guess, acceleration in an EV is hush-hush, and in this the EV6 doesn’t disappoint; it may not be Buick’s Dynaride, but then, neither is it detonated dynamite.

In terms of the EV6’s on-road dynamic, I’ll call it benign. While the Mustang Mach-E offered something almost visceral in its ride-and-handling balance, the EV6 is more mature, appropriate – I’ll guess – to an architecture that is (perhaps) less of a caricature. There’s an upscale elegance to the Kia absent from Tesla’s Model 3, and character in its design missing – I think – from Hyundai’s Ioniq 5.

For an as-tested price of $53K for the GT-Line with one motor and rear-wheel drive, federal and state tax incentives should put the transaction price in the low $40s. If it was my money, I’d opt for the mid-level Wind with a sticker of $47K, and get out the door for about $40,000. And I’d install a fast, Level 3 charger in my garage. If, you know, I’m wanting to look and feel EVangelical.