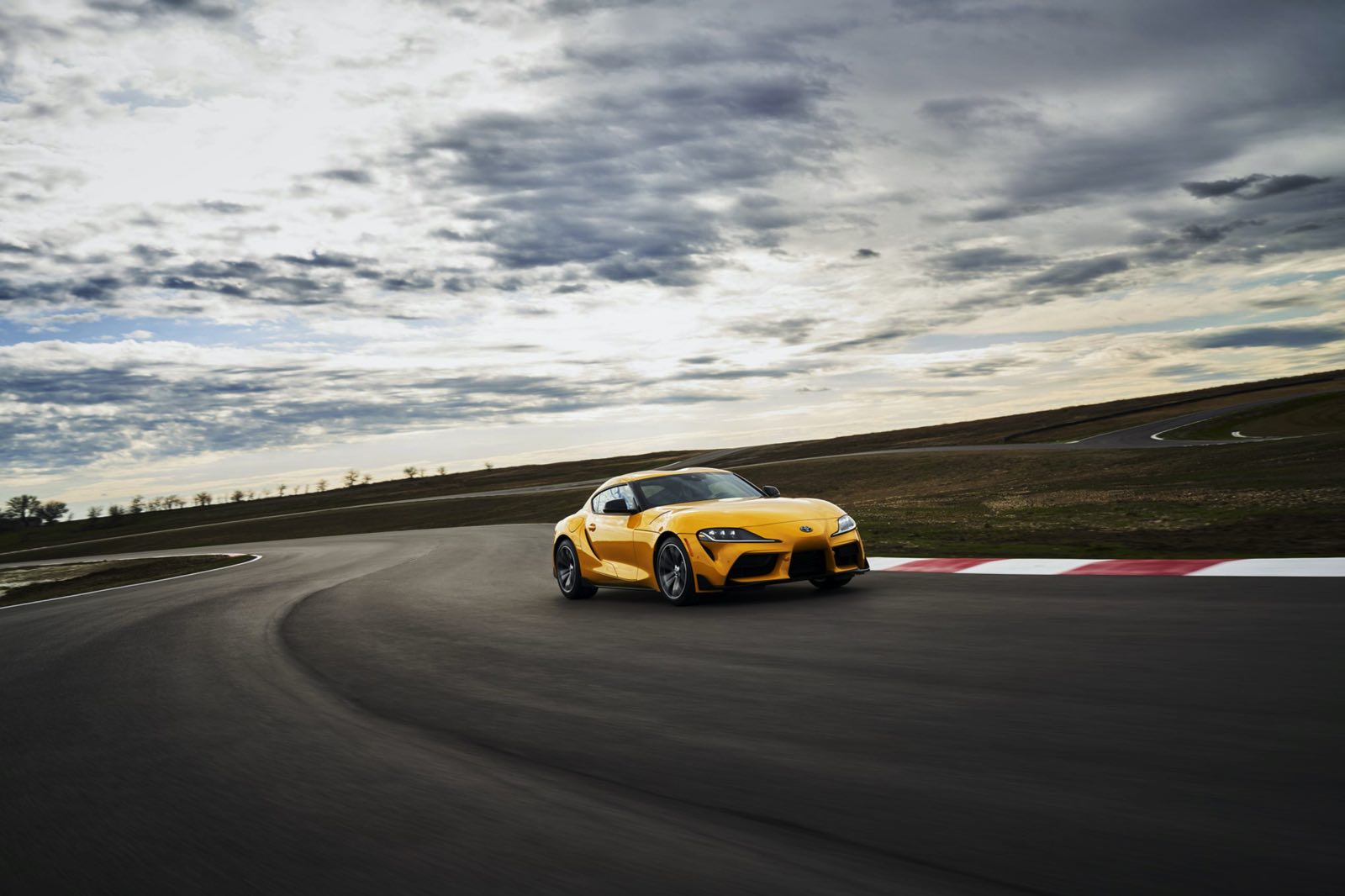 From the Toyota press release: In January 2019, the fifth-generation GR Supra, the first global Toyota GAZOO Racing model, made its world debut, ending years of anticipation and speculation among sports car enthusiasts around the world. Behind the new Supra is a 50+ year lineage of unique Toyota sports and GT cars. The 2020 GR Supra went on sale in summer of 2019 and was available in two grades – 3.0 and 3.0 Premium, as well as a Launch Edition…based on the 3.0 Premium grade.

In the two years since first sitting behind the wheel of Toyota’s new GR Supra, it remains polarizing – even in my own driveway. There is a visual dynamic that is anything but understated, combining a classic front engine/rear wheel drive proportion (perfect to accommodate its turbocharged inline six) with enough aero embellishment for you to imagine it coming from Jim Hall’s Chaparral think tank. Given that the new Supra – in both its original six-cylinder and available four-cylinder guise – is anything but rare, I’ve had time to adjust to its singular personality and, when lowered slightly and given a more aggressive wheel/tire combo, have even come to like it.

Notably, this 2022 GR (GAZOO Racing) Supra arrives in that drive as a few of auto journalism’s A-List received a preview of Nissan’s new Z. Just as the reintroduction of a Supra was long awaited, so was the successor to the Nissan’s 370Z. Introduced in the first year of the Obama administration, the 370Z had benefited from a refresh, but not (notably) a redesign. That comes with the newest Z, boasting 400 horsepower from a twin-turbo V6, your choice of 6-speed manual or 9-speed automatic, and a base price point of just over $40K. There’s a $10K jump to the Z’s performance edition, which presumably has Toyota marketers thankful, as the 6-cylinder Supra is firmly in the $50s, and its 4-cylinder sibling starts north of $40K.

While the Supra’s face is – let’s admit it – in your face, the new Z is almost Buick-benign, paying an obvious homage to the original, penned some 55 years ago, and (perhaps) Fiberfab’s Jamaican. (If you don’t believe me, look it up!)

Inside, the Supra’s launch date – and performance focus – allowed Toyota to produce it without all the advanced tech now regarded as mandatory in a new platform introduction. To that end, controls for both audio and HVAC are more-or-less conventional, more-or-less intuitive. The info is displayed on a screen, but the screen is proportional to the balance of the interior, and doesn’t intimidate.

Behind the wheel there’s a wrapped-in-a-cocoon feel for both driver and passenger, with a great view looking forward, while glances to the side and rear are constricted. But then, we didn’t buy a GR Supra to back up, did we? And when you light the candle you know – immediately – that you’ve lit the damn candle. That ignition is amplified by the Supra’s Sport mode, activating what I like to think of as Toyota’s Happy Button. The Supra’s performance is even more pronounced, its vibe even more visceral.

To justify its investment in a sports/GT and not a sports/Corolla, Toyota collaborated with BMW. The team in Munich also wanted a low-volume sports car, but presumably couldn’t make the numbers work as a solo endeavor. BMW supplied both six and four-cylinder drivetrains, which Toyota subsequently massaged. The result is a remarkable confluence of raw performance and rarified refinement in a 2-seat package selling for the right side of six figures. The GR Supra should be as reliable as you want it, grabbing groceries during the week and grabbing the attention of drivers behind you on the occasional track day.

For the ’23 model year Toyota has announced the addition of a 6-speed manual to the six, while the four will be left with only the automatic. And that, to this unpaid adviser, seems wholly counterintuitive. I like the 4-cylinder – with its lower weight, better balance and lower price point – better than the six, while also thinking it will benefit more from the direct connection supplied by a manual than the 3.0 liter six will benefit. Hopefully, by the time I’m ready to consider a Supra they’ll have rectified that.

In the inevitable refresh, eliminating the fake intakes and vents outside – while making the interior even more analog – would make the decision easier for me. A 4-cylinder motor – amped up to an even 300 horsepower – connected to a slick-shifting 6-speed manual and selling in base spec for around $40K would be a sweetspot in the sports/GT marketplace.  I know Toyota could do it…here’s hoping, with the help of Nissan’s Z, that they will do it!