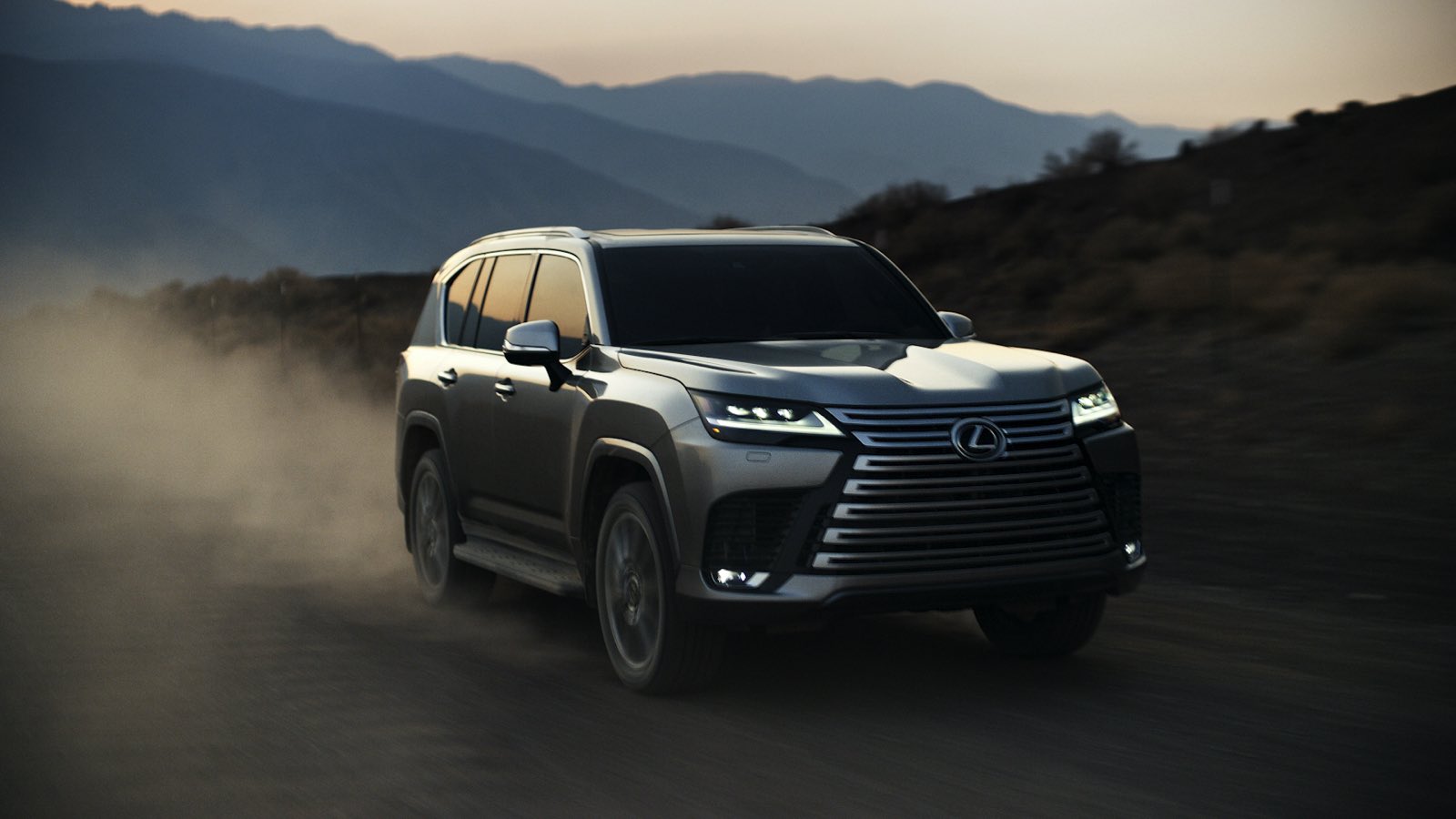 Toyota’s upmarket Lexus division has been setting itself apart – from the Germans it emulates and the competitive Japanese brands it annihilates – since its 1989 launch. Although the sheetmetal of that first LS 400 was more than a little reminiscent of the Mercedes S Class, and the ES 250 resembled a tad too much the middle-class Camry, with real quality, honest value and a genuine dedication to doing things differently in the showroom, Lexus has romped and stomped (albeit quietly) in the marketplace for three decades. And it has never looked back. Until, perhaps, its launch of the all-new LX 600, which is completely redesigned and reengineered, but isn’t what you’d call reimagined. It’s playing the same game, using a redesigned structure and slightly modified name.

With its 2021 model year – some 25 years after the original LX debut – Lexus concluded its 3rd generation LX. Over its long life the LX, whether with a 450 or (later) 570 suffix, has employed body-on-frame construction, an upright two-box architecture, and both the Toyota Land Cruiser’s DNA and, of course, goodwill. In 2022 the Mothership has opted to not supply these United States with a Land Cruiser, so if you want this piece of architecture you need to find a Lexus dealer. (My guess: moving $90K window stickers on a Toyota showroom had become problematic. But then, I’m not on a Toyota showroom…)

That LX 600’s architecture is all-new, with a re-engineered body-on-frame platform and what Lexus describes as ‘avant-garde’ styling; I’m not on board with the ‘avant-garde’ descriptive, but to the design team’s credit, you’ll not confuse this three tons of curb weight (representing a drop of over 400 pounds!) with anyone else’s three tons. This latest iteration of the twin-spindle grille continues to slap me – at least figuratively – in the face, the hood encompasses twin peaks and a valley, and the amount of front and rear overhang will suggest taking a paved path to your automotive enlightenment, although the ride height is adjustable. In its profile the rig looks under-tired and overbuilt, a Queen’s Carriage for Camilla and not – notably – Diana. But hand it to the designers, as they’ve created a new design immediately recognizable as originating from the same brand as its predecessor.

Inside, the big news is, well, the big news: The LX 600 offers its owner (or chauffeur) a total of 19.3 inches of screen, achieved with 12.3 inches of upper screen and seven inches of lower screen. And, of course, the lower screen is located to better inform, rather than distract. (Of course.) The upper screen shows navigation, audio and the LX’s multi-terrain monitor when off-roading, while the smaller, lower screen illustrates climate control and supplies a driving-support graphic for the Multi-Terrain Select.

Our test LX 600 came with the Lexus-first four-passenger Ultra Luxury grade. That’s right – you have three tons of curb weight and 200 inches of overall length seating but four people. But are those four ever coddled, especially the suits in the back row! There you’ll find the chance to recline and get a massage; essentially everything but a cut, shampoo and blow-dry.  And while all of this is nice, the rear seat armrest, which doubles as the control station, essentially precludes carrying anything meaningful – like a bike! – in the rear cargo area. That may seem minor to the targeted clientele, who’ll have a Mercedes van to carry their bike (and an assistant to ride it), but it was significant to me. And my bike.

Perhaps the biggest transformation for the newest LX is under the hood. There, the normally aspirated 5.7 liter V8 is gone, replaced by Toyota’s twin-turbo V6. Burning premium unleaded – and to its credit, a 19 EPA Combined rating – the 3.5 liter twin-turbo V6 delivers 409 horsepower and 479 lb-ft of torque. That’s a generous bump when compared to the outgoing V8, which delivered 383 horsepower and 403 lb-ft of torque. The twin-turbo V6 is shared with Toyota’s full-size Tundra pickup, and when fitted to the LX 600 supplies 8,000 pounds of towing capability. In short, more than enough to pull the new Airstream!

The twin-turbo V6 goes about its business effortlessly. And that, combined with a chassis that continues to drive ‘smaller’ than it is makes the whole driving process far easier – and more sublime – than 6,000 pounds of truck might be. And that ease is in combination with an upright seating position and expansive glass area; the mall run has never been easier.

Regrettably, Ultra Luxury trim comes at an ultra-luxury price point, as our text LX was $126,000. But you can ‘skinny’ into this new Lexus for as little as $87K, while certified pre-owned inventory can typically be had for roughly half that figure. It’s all rather rarefied, but then, those making the money have to spend it on something. And this ‘something’ can be handed down to the grandchildren. Along with – hopefully – a small trust fund. To pay for that petrol.